A bird flu virus that's a different strain than the one that ravaged turkey and chicken farms in the Midwest last summer has been found at a southern Indiana turkey farm, federal officials said Friday. 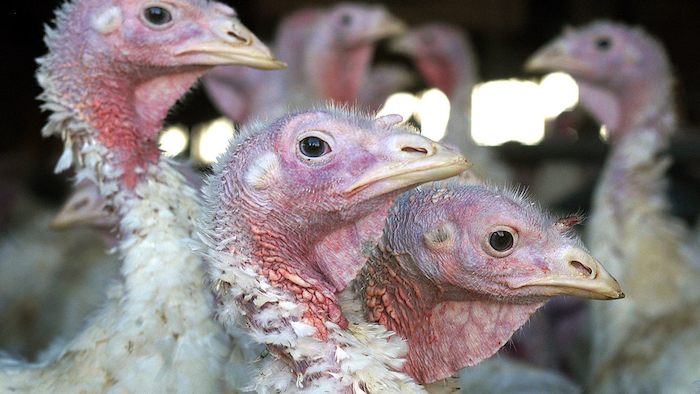 INDIANAPOLIS (AP) — A bird flu virus that's a different strain than the one that ravaged turkey and chicken farms in the Midwest last summer has been found at a southern Indiana turkey farm, federal officials said Friday, cautioning that a quick response could stem any larger outbreak.

The H7N8 flu strain was confirmed at a commercial turkey farm in Dubois County, about 70 miles west of Louisville, Kentucky, after samples from birds were taken when the farm saw a surge in turkey deaths, according to the U.S. Department of Agriculture. The strain is highly contagious for birds; the USDA said no human infections with the viral strain have been detected.

State and federal officials said they confirmed the virus Thursday night and began euthanizing about 60,000 turkeys, saying they hope to have them all removed by Friday night.

"Hopefully as we respond quickly to this virus we can get it contained and hopefully not see an extensive outbreak like we did last year," said T.J. Myers, a veterinary services administrator with the USDA. "We'll see how the coming days unfold."

It's a different strain than the H5N2 virus that cost turkey and egg producers, mostly in the Upper Midwest, about 48 million birds. Research has shown that wild birds' northern migration introduced the H5N2 virus, which began to accelerate from farm to farm in the spring.

Indiana wildlife experts said that southern migration happened later than normal this year because of the mild weather, but it's unclear "how much of a factor that has been in this," according to Indiana Board of Animal Health spokeswoman Denise Derrer, who added, "We hope we can get some more information as we do a little bit of epidemiology down at that site," she said.

There's no indication why H7N8 surfaced during winter months, but officials have said bird flu — be it H5N2 or H7N8 — could resurface anytime. A vaccine has been developed to cover the H5N2 strain, but it is not effective against the Indiana strain, Myers said, although new techniques could help with the development of a more specific vaccine if needed.

Indiana's poultry industry brings in $2.5 billion a year, Derrer said, adding that the state leads the country in duck production, is No. 3 in egg production and fourth in turkeys.

"I can't say it's our worst nightmare, but it's pretty close to it," she said, noting there is a quarantine in place for commercial poultry farms and backyard flocks within a nearly 6-mile radius. "This is a very poultry-intense area of the state, and our poultry industry is pretty significant here in Indiana, so we don't want to minimize the importance of this at all."

The USDA said federal and state partners are working together on additional surveillance and testing in the area, which is part of bird flu response plans that were drafted last year.