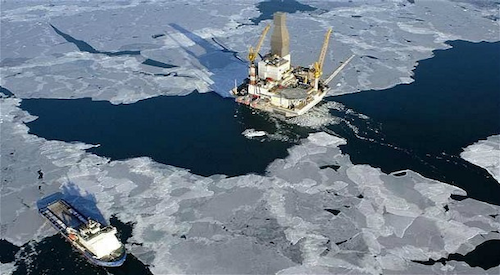 The next destinations for both vessels have not been determined, Smith said.

Shell announced on Sept. 28 that it would cease further exploration in the Chukchi and Beaufort seas after spending upward of $7 billion.

The company cited disappointing results from an exploratory well drilled this summer about 80 miles off Alaska's northwest coast in the Chukchi and the unpredictable federal regulatory environment.

The exploratory well found oil and gas but not in quantities that justified the huge expense of Arctic drilling, where Shell backed up its rigs with a flotilla of support and safety vessels and made regular helicopter flights from a staging area 150 miles away in Barrow, the country's northernmost community.

Federal regulators required two drill vessels in Arctic drilling areas so that a relief well could be quickly drilled after a well blowout.

Operations in the Chukchi Sea ramped down almost immediately after the announcement, Smith said.

Shell last drilled in Alaska's northern waters in 2012 and experienced significant problems with vessels in transit after drilling ended.

The Kulluk, a 266-foot circular drill vessel owned by Shell with a reinforced hull, broke loose from its tow vessel in gale-force December winds in the Gulf of Alaska. Efforts to control the vessel failed. The Kulluk ran aground near Kodiak Island on Dec. 31, 2012. The vessel was eventually scrapped.

The Noble Discoverer, built as a logging ship in 1965 and converted to a drill ship in 1976, in 2012 was found to be in violation of pollution and safety maritime law.

Crew members had dismantled an oil-water separator, a device that removes petroleum from bilge water before it's dumped overboard. The crew also failed to inform the Coast Guard of on-board back fires, high levels of exhaust and fuel leaks in violation of safety laws. Following a Coast Guard investigation, Noble Drilling pleaded guilty to eight felonies and was fined $12.2 million.

Greenpeace activists in early April boarded the Blue Marlin, a heavy-lift ship carrying the Polar Pioneer across the Pacific Ocean to the United States. They left after six days.

Seattle protesters in kayaks, dubbed "kayaktivists," took to the water to demonstrate against the Polar Pioneer when it was docked in the city. Greenpeace USA protesters in Portland, Oregon, hung from a bridge over the Willamette River and briefly delayed a support vessel that had undergone repairs.

Greenpeace spokesman Travis Nichols said by email that he was not aware of any additional protests planned.