Oil Collapse Gives US Colleges a Test on Backpedaling Donors

With oil prices down more than 50 percent since last summer, and expected to stay down deep into next year, the outlook for both public revenue and donations is grim in energy-heavy states like Alaska, Oklahoma and Louisiana. 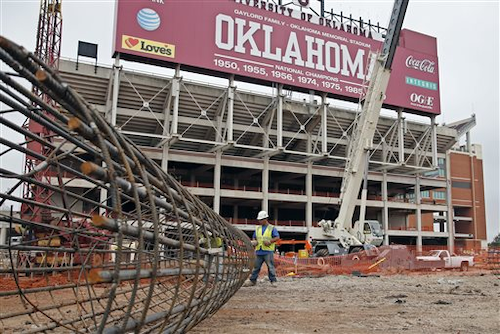 AUSTIN, Texas (AP) — It's easy to see what oil money means to the University of Texas. Tuition hasn't budged in three years because of gushing wells in the Permian Basin. More than a few buildings, including the football team headquarters, are named after wildcatters, and a pump jack stands outside the 100,000-seat stadium to commemorate the 1920s oil boom.

But the latest bust and tumbling crude prices are now pinching off the largesse that helps this university and others in oil-rich states afford what they want when state budgets are straitened, which is especially the case now. Already, the consequences are becoming obvious.

Campus construction projects are being stretched out or put in limbo, scholarship funds are taking a hit and across the Southwest, donors are asking for more time to make good on big pledges.

"When the price of oil was $100 a barrel we had a lot more gifts. They had the ability to make more gifts," said Bob Walker, who raised hundreds of millions of dollars for Texas A&M University for three decades before retiring last year.

The University of Oklahoma has scaled back a planned $370 million renovation to its football stadium. Tuition hikes are back on the table at Texas universities. At Louisiana State University, energy sector gifts have fallen from a quarter of all fundraising to a tenth, which is being felt as the school tries to offer students a new minor in energy.

"The answer we're hearing isn't 'No.' It's just 'Not right now,'" said Kirk Jewell, president of the OSU Foundation at Oklahoma State University, where half of the top 10 athletic boosters have ties to the energy industry.

U.S. colleges received a record $38 billion in charitable donations in 2014, according to the Council for Aid to Education — a sum that helped make up for the continuing shrinkage of appropriations from state governments. Donations and endowment are 10 percent of the budget at the University of Texas, up from 3 percent in the 1980s.

But with oil prices down more than 50 percent since last summer, and expected to stay down deep into next year, the outlook for both public revenue and donations is grim in energy-heavy states like Alaska, Oklahoma and Louisiana. Prospects are somewhat less dim in big oil producers like Texas and California where the economy is more diversified.

State policymakers in Oklahoma are warning about a budget shortfall exceeding a half-billion dollars. Just one month into the current budget year, Louisiana lawmakers were forced to cut $3.8 million from public colleges.

The mood is darkest of all in Alaska, where oil revenues pay for 90 percent of state spending. Schools already under a blanket hiring freeze are expecting a third year of budget reductions and possible orders to consolidate programs, said Carla Beam, president of the University of Alaska Foundation.

Several major universities in the Southwestern oil patch were wrapping up record-breaking capital campaigns when oil prices began plunging late in 2014, and development officers say they haven't yet assessed the full negative impact. But anecdotally, they say, donors are rattled.

University of Oklahoma President David Boren, while explaining the downsizing of the football stadium upgrade earlier this year, said half the net worth of some major donors had been "wiped out." Only four years ago, the university got $20 million from one benefactor, hydraulic fracturing pioneer Harold Hamm, for a new diabetes center.

At Texas Tech University, athletic director Kirby Hocutt said this spring there had been a "pause to some conversations" amid efforts to raise $43 million for new training facilities.

"The millionaires are worried," said Richard White, dean of the College of Business at Louisiana State University.

Students could feel the bite at Texas' Angelo State University, where one in three receive scholarship money from a foundation fed by oil royalties that have dropped by half. "It has slowed the growth of the endowment considerably," said foundation President Candice Belle Upton.

Texas' public universities are closely tied to oil because the royalties from the state's 2.1 million acres of oil and gas lands go directly to the University of Texas and Texas A&M System. But only about a dozen of the previously 100-plus rigs in the Permian Basin shale are still working, said Mark Houser, chief executive of the state's University Lands. The fiscal year ended in August with campus royalty revenues down 26 percent, a five-year low.