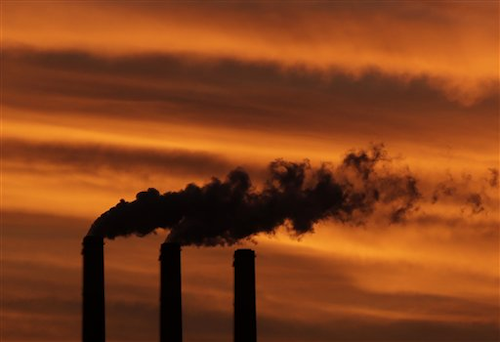 At the same time, the EPA moved to remove two states — South Carolina and Florida — from the "good neighbor" rules, saying they don't contribute significant amounts of smog to other states.

The Senate approved two GOP-sponsored resolutions disapproving the power-plant rules and rendering them inoperative. The measures were both approved, 52-46, Tuesday under the little-used Congressional Review Act, which allows Congress to block executive actions it considers onerous with simple majority votes. The maneuver is subject to a presidential veto and has rarely been successful in overturning executive branch rules.

The EPA's proposal on downwind pollution follows a federal appeals court ruling this summer that upheld the agency's right to impose the clean-air standards, which block states from adding to air pollution in other localities. Some states and industry groups had argued that the rule was overly burdensome.

The rule applies mostly to states in the South and Midwest that contribute to soot and smog along the East Coast.

Under the EPA's proposal, states would have to comply with air quality standards for ozone, or smog, set by the George W. Bush administration in 2008. Current rules are based on pollution standards developed in the late 1990s.

"This update will help protect the health and lives of millions of Americans by reducing exposure to ozone pollution, which is linked to serious public health effects including reduced lung function, asthma ... and early death from respiratory and cardiovascular causes," EPA Administrator Gina McCarthy said in a statement.

The proposal reinforces the obligations states have to address air pollution that is carried across state lines, McCarthy said.

Senate Majority Leader Mitch McConnell of Kentucky focused on the climate rule. He said Obama was "trying to impose deeply regressive energy regulations that would eliminate good-paying jobs, punish the poor and make it even harder for Kentuckians to put food on the table."

Sen. Shelley Moore Capito, R-W.Va., called the rule the most expensive environmental regulation ever imposed on the nation's power sector, adding that it would "choke off our most reliable and affordable source of energy and devastate the livelihoods of many folks around this country."

Republican Sens. Lindsey Graham of South Carolina and Marco Rubio of Florida, who are running for president, were campaigning and did not vote.

The Senate votes came less than two weeks before Obama and other world leaders are slated to meet in Paris to finalize an agreement to cut carbon emissions worldwide.

The White House has threatened to veto the resolutions, saying they undermine public health protections of the Clean Air Act and "stop critical U.S. efforts to reduce dangerous carbon pollution from power plants."

Senate Democratic Leader Harry Reid of Nevada said Republicans were continuing to "waste time waging partisan campaigns on behalf of greedy special interest groups," including billionaire brothers Charles and David Koch, who are major donors to Republican political candidates. Koch Industries is one of the largest private companies in America and is involved in oil refining, chemicals, pipelines and other businesses.

Reid called efforts to address climate change a global obligation and said, "Republicans should get in touch with reality, stop fighting the Koch brothers' losing battle to allow unlimited pollution and do what's right for our country."

The agency said it will take public comments for at least two months before finalizing the rule next year.