Mining Company In Brazil Says Other Dams At Risk Near Breach

Officials said that only one, not two dams as earlier reported, burst on Nov. 5. 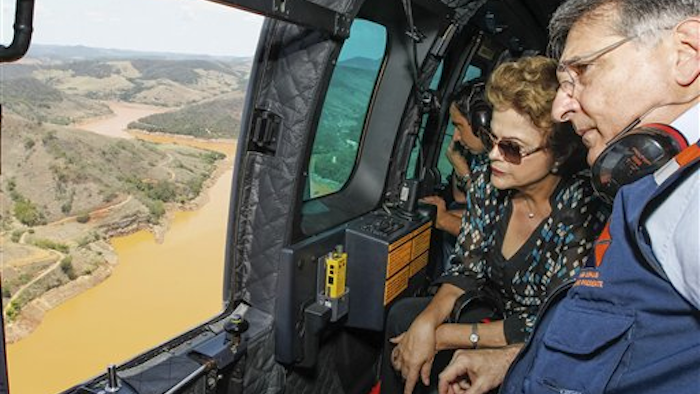 Two more dams at the iron ore mine that suffered a dam breach earlier this month are at risk of bursting and are undergoing emergency repairs, mining company officials said Tuesday

Klebber Terra, the director of operations at the Samarco mine in the southeastern state of Minas Gerais, said blocks of rocks were being used to reinforce the two dams, reported G1, the Internet portal of the Globo television network. Terra told a news conference that the work will take up to three months, G1 said.

"We are very sympathetic and distraught about what happened. We work with the best dam monitoring technicians but we cannot say that this tragedy could have been avoided," Terra said in comments carried by O Estado de S.Paulo newspaper.

Company officials also said that only one, not two dams as earlier reported, burst on Nov. 5. That breach unleashed a massive wave of mud, debris and water that practically wiped out the nearby hamlet of Bento Rodrigues, contaminated a river that's the source of water for residents of two states, and devastated aquatic life. Officials have called the contamination the worst-ever environmental disaster in Brazil.

The state fire department has said that at least seven people died in the disaster. There are another four bodies awaiting identification and 12 more people missing.

A separate report on Tuesday in the Estado de S.Paulo cited a lawmaker who said the accident caused an estimated $2.6 billion to $3.7 billion in damages. Rep. Leonardo Quintao said he based the estimate on assessments by parliamentary technical experts, the report said.

Samarco, which is jointly owned by mining giants Vale of Brazil and BHP Billiton of Australia, has signed a deal with state and federal public prosecutors to pay $262 million in damages.