US Agency Fines Takata up to $200 Million, Speeds up Air Bag Recalls

U.S. auto safety regulators said Tuesday it will fine Japanese parts supplier Takata Corp. up to $200 million, accelerate the recall process to replace the company's faulty air bag inflators and order it to stop using an unstable chemical linked to the defect. 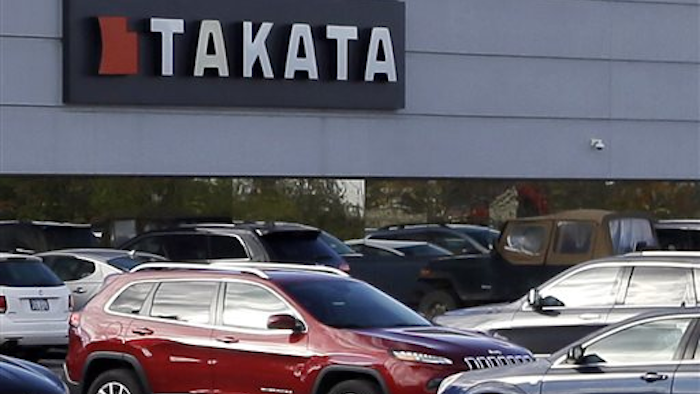 U.S. auto safety regulators said Tuesday it will fine Japanese parts supplier Takata Corp. up to $200 million, accelerate the recall process to replace the company's faulty air bag inflators and order it to stop using an unstable chemical linked to the defect.

"For years, Takata has built and sold defective inflators. It refused to acknowledge that they were defective," U.S. Department of Transportation Secretary Anthony Foxx said at a press conference at the agency's Washington headquarters. "This has been a mess and today the U.S. DOT is stepping in to clean up the mess."

The fine includes a $130 million penalty if Takata does not follow through on its agreement or if more violations are found. It is the largest civil penalty levied by the agency's National Highway Traffic Safety Administration.

NHTSA said the orders will speed up the recall process by "years" and has directed Takata and the 12 automakers involved in the recalls to prioritize the vehicles that receive replacement parts based on risk, such as the age of the car and exposure to high absolute humidity.

Takata and the automakers must be able to supply replacement kits to the highest risk vehicles by next June and fix all remaining inflators by the end of 2019.

Last month, the agency said of the around 19 million cars in the U.S. equipped with the faulty air bags linked to 8 deaths and about 100 injuries, only 22.5 percent of the vehicles have been fixed.

"We are accelerating Takata recalls to get safe air bags into American vehicles more quickly, ensuring that consumers at the greatest risk are protected, and addressing the long-term risk of Takata's use of a suspect propellant," NHTSA Administrator Mark Rosekind said in a press release.

The agency said it believes the chemical compound ammonium nitrate plays a role in the violent ruptures. It will be not only phased out of future products, but Takata will need to recall all air bags in the country using the unstable compound unless the company proves it is safe.

"The combination of Takata's delays and denials plus unexplained issues with ammonium nitrate inflators not already under recall leave us without confidence in these products going forward," Foxx said.

The agency will appoint an independent monitor to observe Takata for five years to ensure the company is complying with the orders.

Takata said it will cooperate with the agency and has agreed to phase out the manufacturing of the compound by the end of 2018.

"We will comply with all aspects of the settlement and are committed to being part of the solution," Takata CEO Shigehisa Takada said in a press release. "Today's announcement also marks a pivot point for Takata by setting out an orderly transition to the next generation of inflators."

Meanwhile, Honda Motor Co., which has a significant population of the affected vehicles, said Tuesday it has repaired 41 percent of its cars with the defective air bags.

The Japanese automaker said it is "deeply troubled" by Takata's behavior and is working with alternative parts suppliers to avoid using Takata-made replacement parts to fix the remaining vehicles. And Honda will not use Takata inflators in the front driver or passenger air bag in any new vehicles.

More than 50 million cars equipped with Takata air bags have been recalled globally since 2008, mostly in the United States and Japan.