A leak of radioactive material into the groundwater below a nuclear power station in New York City's suburbs highlights a chronic problem with the nation's atomic plants, some watchdogs said. 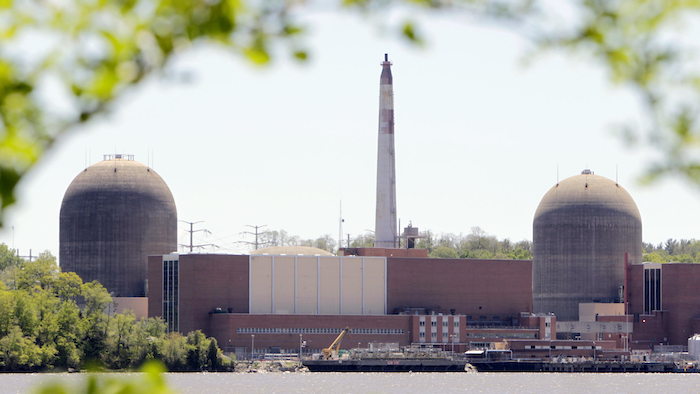 NEW YORK (AP) — A leak of radioactive material into the groundwater below a nuclear power station in New York City's suburbs highlights a chronic problem with the nation's atomic plants, some watchdogs said.

New testing has shown that the amount of tritium in the groundwater below the Indian Point power plant in Buchanan, New York, is about 740 times the amount allowed in drinking water, though officials said there was no public health risk from the leak.

Entergy Corp., which operates the plant at the edge of the Hudson River, said Wednesday that the latest samples from monitoring wells found tritium at a level of 14.8 million picocuries per liter. The U.S. Environmental Protection Agency has set a limit of no more than 20,000 picocuries per liter in drinking water.

Buchanan gets its public water supply from reservoirs in the Catskill mountains, not from local wells, so the danger to humans from the spill was likely to be negligible.

But critics of nuclear plants said the mere fact of the leak's occurrence is cause for concern, partly because investigators had yet to pinpoint how it happened.

"There a leak somewhere, and I don't think they know where it is," said Arnold Gundersen, a nuclear engineer and former industry executive who now runs a nonprofit group dedicated to nuclear safety.

An Associated Press investigation, published in 2011, found that three quarters of commercial nuclear power plants in the U.S. had reported tritium leaks.

Those spills were often linked to corroded, underground pipes. Experts have questioned whether the plants are capable of catching leaks and spills promptly in the maze of buried pipes that the plants use to move coolant.

Gundersen said he was concerned that other, potentially more problematic elements could also have leaked out that would add to the cleanup burden when the facility is eventually decommissioned.

"All of that stuff stays in the soil," he said.

Entergy spokesman Jerry Nappi said the radioactive water probably leaked during a recent operation to prepare for a planned refueling outage, which takes place every two years, but the New Orleans-based company was still investigating to figure out exactly how.

"Tritium making its way to the ground at Indian Point is not the way we want to operate," he said.

He said testing had also found elevated levels of antimony, at about 5,500 picocuries per liter.

The contaminated groundwater will eventually make its way to the Hudson River, where it will become so diluted it won't be detectable, Nappi said.

Gov. Andrew Cuomo has ordered the state's departments of health and environmental conservation to investigate, calling the leak "unacceptable."

Cuomo, who lives about 15 miles east of the plant, has long questioned the safety of having a nuclear plant so close to such a large population center. In 2007, as the state's attorney general, he accused the Nuclear Regulatory Commission of being irresponsible as it sought to relicense the plant.

Other politicians in the area have similar fears.

"It's like an old car ready to fall apart. Somewhere along the way, you have to say, 'the risk is too great,'" said Assemblyman Tom Abinanti, a Democrat from Greenburgh.

Nappi defended the plant's record, saying it had operated safely for more than 40 years.

Federal regulators are looking into the spill, with the Nuclear Regulatory Commission saying a radiation specialist was being sent to the site. The NRC also has staff stationed at the site on a permanent basis.