$5 Trillion Question For Trump Tax Plan: How To Pay For It?

Senate Republicans appeal willing to let the national debt rise by as much as $1.5 trillion over the next decade. Even that wouldn't likely be enough. 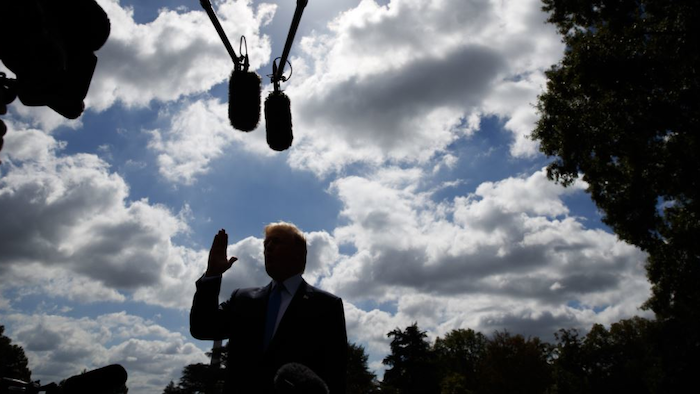 How do you pay for an estimated $5.8 trillion tax cut?

For President Donald Trump and Republican congressional leaders, that is the mostly unanswered $5,800,000,000,000 question.

The plan they released Wednesday took a first step toward outlining how Republicans propose to cover some of the monumental cost over the next 10 years, mainly by removing certain tax breaks. But even those proposed changes were left vague — and wouldn't remotely pay the full cost of the tax cut.

The administration says it would eliminate most personal tax breaks. Possibly gone would be people's ability to deduct state and local taxes as well as eligible medical expenses. But doing so would still leave the tax cut more than $2 trillion shy of paying for itself.

The Trump administration argues that it can accelerate the economy's growth far beyond its current pace and, in doing so, generate enough federal revenue to cover the shortfall. Most economists have called that wishful thinking.

That's why analysts say the government would have to help pay for the tax cut by slashing programs that serve the middle class. Or it would be forced to run the national debt up to dangerous levels, likely driving up borrowing rates for consumers and businesses.

Because the administration has put off a full accounting of the trade-offs it's prepared to make, the politically perilous decisions are being left for the tax-writing committees in the House and Senate to turn the blueprint into an actual bill.

"You can't have responsible tax reform and everyone wins," said Marc Goldwein, senior policy director for the Committee for a Responsible Federal Budget.

The tax cut is being proposed at a time when the publicly held national debt is already $14.6 trillion. Even if tax rates for companies and families were unchanged, the debt is expected to balloon by an additional $10 trillion over the next decade. That increase largely reflects the rising costs of Social Security and Medicare as the vast generation of baby boomers continues to retire.

The proposed tax cuts in the Trump plan would total $5.8 trillion over 10 years, according to an analysis by the Committee for Responsible Federal Budget and other reports. That figure includes the effects of reducing the number of individual tax brackets and shrinking the corporate tax rate to 20 percent from 35 percent, among other changes. (The plan doesn't specify which income levels would apply to each individual bracket.)

The plan does list a few changes to generate additional revenue. But these ideas could undermine some of Trump's claims that the middle class as a whole would benefit from the changes.

For example, families could no longer reduce their taxable income with personal exemptions for dependents in their household. This would return about $1.6 trillion to the government. It could also nullify the benefits Trump says would result from doubling the standard deduction people now receive if they don't itemize their taxes.

Losing the personal exemption means some middle class families might end up paying more in taxes, said Ernie Tedeschi, a former Treasury Department adviser who is a policy economist at the investment bank Evercore ISI.

"For the average family, they don't have enough details yet" to know whether the plan helps them, Tedeschi said.

An additional $1.6 trillion would, in theory, be generated by repealing most of the itemized deductions (excluding mortgage interest and charitable deductions). The administration has said itemized deductions usually help only the affluent. But in fact, many middle class households benefit from itemizing deductions in any given year. A prime example is the state and local tax deduction, which can help moderate income households in such high-cost states as California and New York.

There are other unmentioned deductions that could be lost to the middle class. Families can now itemize deductions for outsized medical costs or property damaged by natural disasters such as hurricanes, noted Seth Hanlon, a senior fellow at the liberal Center for American Progress and a former economic aide to President Barack Obama.

"There is going to be a large number of middle class families that are going to be severely disadvantaged," Hanlon said.

Even with all the additional revenue from these changes and others, the Trump plan would add $2.2 trillion to the debt. Estimates suggest that that figure would swell to $2.7 trillion if additional interest payments on the debt were included.

So how to cover that cost?

Senate Republicans have signaled their willingness to let the national debt rise by as much as $1.5 trillion over the next decade. Even that wouldn't likely be enough.

The administration has a ready response to that problem. Treasury Secretary Steven Mnuchin and Gary Cohn, Trump's top economic adviser, argue that the tax cut would spark economic growth exceeding 3 percent annually, well above its recent 2 percent average. That added growth would, they say, generate revenue to cover the remainder of the cost of the tax cut.

"Honestly, we think we can get over 3 percent, so it's not just the 3 percent bogey we're shooting at," Cohn said in an interview.

Academic economists surveyed by the University of Chicago in May overwhelmingly asserted that the tax cuts would fail to deliver the growth the White House is promising. That perspective is shared by economists monitoring the financial and credit markets.