Evidence Of Spills At Toxic Site During Floods From Hurricane Harvey

The U.S. government received reports of spills at one of Houston's dirtiest Superfund toxic waste sites after the rains from Hurricane Harvey stopped. 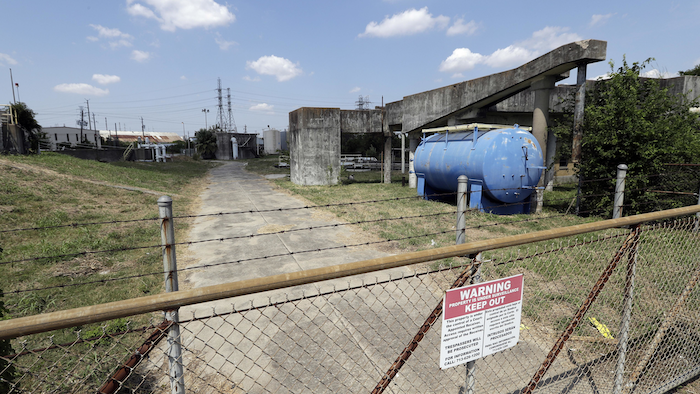 A gate at the U.S. Oil Recovery Superfund site is shown Thursday, Sept. 14, 2017, in Pasadena, Texas, where three tanks once used to store toxic waste were flooded during Hurricane Harvey. The Environmental Protection Agency says it has found no evidence that toxins washed off the site, but is still assessing damage. (AP Photo)

The U.S. government received reports of three spills at one of Houston's dirtiest Superfund toxic waste sites in the days after the drenching rains from Hurricane Harvey finally stopped. Aerial photos reviewed by The Associated Press show dark-colored water surrounding the site as the floods receded, flowing through Vince Bayou and into the city's ship channel.

The reported spills, which have been not publicly detailed, occurred at U.S. Oil Recovery, a former petroleum industry waste processing plant contaminated with a dangerous brew of cancer-causing chemicals. On Aug. 29, the day Harvey's remnants cleared out, a county pollution control team sent photos to the Environmental Protection Agency of three large concrete tanks flooded with water. That led PRP Group, the company overseeing the ongoing cleanup, to call a federal emergency hotline to report a spill affecting nearby Vince Bayou.

Over the next several days, the company reported two more spills of potentially contaminated storm water from U.S. Oil Recovery, according to reports and call logs obtained by the AP from the U.S. Coast Guard, which operates the National Response Center hotline. The EPA requires that spills of oil or hazardous substances in quantities that may be harmful to public health or the environment be immediately reported to the 24-hour hotline when public waterways are threatened.

The EPA has not publicly acknowledged the three spills that PRP Group reported to the Coast Guard. The agency said an on-scene coordinator was at the site last Wednesday and found no evidence that material had washed off the site. The EPA says it is still assessing the scene.

The AP reported in the days after Harvey that at least seven Superfund sites in and around Houston were underwater during the record-shattering storm. Journalists surveyed the sites by boat, vehicle and on foot. U.S. Oil Recovery was not one of the sites visited by AP. EPA said at the time that its personnel had been unable to reach the sites, though they surveyed the locations using aerial photos.

Following AP's report, EPA has been highlighting the federal agency's response to the flooding at Superfund sites. EPA Administrator Scott Pruitt reiterated that safeguarding the intensely-polluted sites is among his top priorities during a visit Friday to the San Jacinto River Waste Pits, one of the sites AP reported about two weeks ago.

Pruitt then boarded a Coast Guard aircraft for an aerial tour of other nearby Superfund sites flooded by Harvey, including U.S. Oil Recovery.

Photos taken Aug. 31 by the National Oceanic and Atmospheric Administration show dark-colored water surrounding the site two days after the first spill was reported to the government hotline. While the photos do not prove contaminated materials leaked from U.S. Oil Recovery, they do show that as the murky floodwaters receded, they flowed through Vince Bayou and emptied into the ship channel leading to the San Jacinto River. The hotline caller identified Vince Bayou as the waterway affected by a spill of unknown material in unknown amounts.

Thomas Voltaggio, a retired EPA official who oversaw Superfund cleanups and emergency responses for more than two decades, reviewed the aerial photos, hotline reports and other documents obtained by AP.

"It is intuitively obvious that the rains and floods of the magnitude that occurred during Hurricane Harvey would have resulted in some level of contamination having been released to the environment," said Voltaggio, who is now a private consultant. "Any contamination in those tanks would likely have entered Vince Bayou and potentially the Houston Ship Channel."

He said the amount of contaminants spread from the site during the storm will likely never be known, making the environmental impact difficult to measure. The Houston Ship Channel was already a polluted waterway, with Texas state health officials warning that women of childbearing age and children should not eat fish or crabs caught there because of contamination from dioxins and PCBs.

PRP Group, the corporation formed to oversee the cleanup at U.S. Oil Recovery, said it reported the spills as legally required but said subsequent testing of storm water remaining in the affected tanks showed it met federal drinking water standards. The company declined to provide AP copies of those lab reports or a list of specific chemicals for which it tested, saying the EPA was expected to release that information soon. 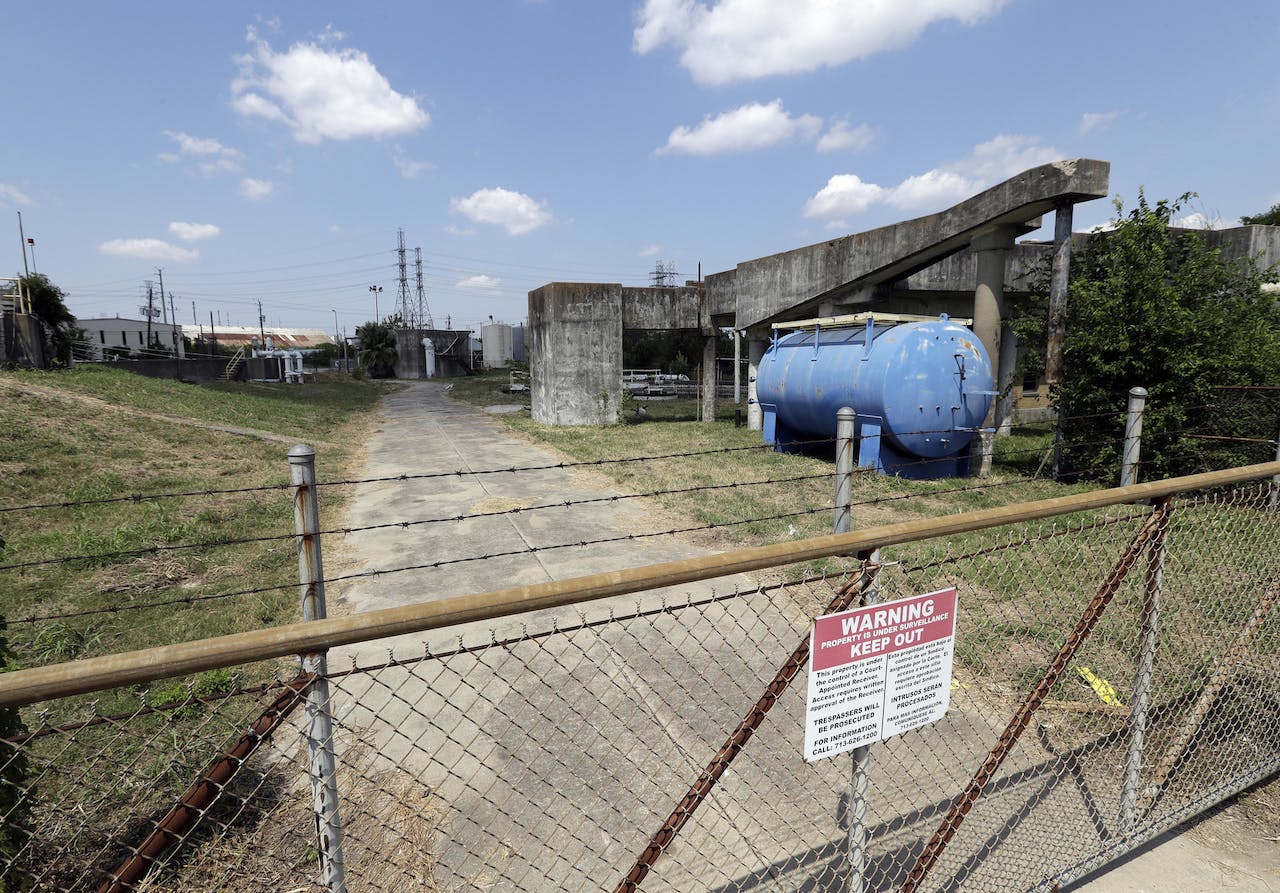 A gate at the U.S. Oil Recovery Superfund site is shown Thursday, Sept. 14, 2017, in Pasadena, Texas, where three tanks once used to store toxic waste were flooded during Hurricane Harvey. The Environmental Protection Agency says it has found no evidence that toxins washed off the site, but is still assessing damage. (AP Photo)

U.S. Oil Recovery was shut down in 2010 after regulators determined operations there posed an environmental threat to Vince Bayou, which flows through the property in Pasadena. Pollution at the former hazardous waste treatment plant is so bad that Texas prosecutors charged the company's owner, Klaus Genssler, with five criminal felonies. The German native fled the United States and is considered a fugitive. Genssler did not respond to efforts to contact him last week through his social media accounts or an email account linked to his website address.

More than 100 companies that sent hazardous materials and oily waste to U.S. Oil Recovery for processing are now paying for the multimillion-dollar cleanup there through a court-monitored settlement, including Baker Hughes Oilfield Operations Inc., U.S. Steel Corp. and Dow Chemical Co.

Past sampling of materials at the site revealed high concentrations of hazardous chemicals linked to cancer, such as benzene, ethylbenzene and trichloroethylene. The site also potentially contains toxic heavy metals, including mercury and arsenic.

A 2012 EPA study of the more than 500 Superfund sites across the United States located in flood zones specifically noted the risk that floodwaters might carry away and spread toxic materials over a wider area.

Over the past six years, remediation efforts at U.S. Oil Recovery have focused on the northern half of the site, including demolishing contaminated structures, removing an estimated 500 tons of sludge and hauling away more than 1,000 abandoned containers of waste.

PRP Group said the southern portion of the site, including the three waste tanks that flooded during Harvey, has not yet been fully cleaned. Over the years workers have removed more than 1.5 million gallons of liquid waste — enough to fill nearly three Olympic-sized swimming pools.

AP began asking the EPA whether contaminated material might have again leaked from U.S. Oil Recovery last week, after reviewing the aerial photos taken Aug. 31. The EPA said it visited the site on Sept. 4, nearly a week after site operators reported an initial spill, and again the following week. The EPA said that its staff saw no evidence that toxins had washed away from the scene during either visit.

"Yesterday, an EPA On-scene coordinator conducted an inspection of Vince Bayou to follow up on a rumor that material was offsite and did not find any evidence of a black oily discharge or material from the U.S. Oil Recovery site," an EPA media release said on Thursday.

PRP Group said the spills occurred at the toxic waste site on Aug. 29, Sept. 6 and Sept. 7. One of the EPA's media releases on Sept. 9, more than 11 days after the first call was made to the hotline, made reference to overflowing water at the scene, but did not describe it as a spill.

The company said it reported the first spill after Harvey's floodwaters swamped the three tanks, filling them. The resulting pressure that built up in the tanks dislodged plugs blocking a series of interconnecting pipes, causing the second and third spills reported to the hotline the following week.

The company does not know how much material leaked from the tanks, soaking into the soil or flowing into nearby Vince Bayou. As part of its post-storm cleanup workers have vacuumed 63 truckloads holding about 315,000 gallons from the tanks.

The Superfund site is located just a few hundred yards from the Pollution Control Services offices for Harris County, which includes Houston. Its director, Bob Allen, says his team took pictures of the flooding on Aug. 29, when the area that includes the three big tanks was still underwater. The AP requested those photos as public records, but they have not yet been released.

Allen said his staff did not note any black water or oily sheen on the surface at the time, and did not collect water samples for testing. He said the EPA later sampled the area to determine whether there was contamination.

"We knew that the water probably got into the plant, probably washed out some of the stuff that was in the clarifier," Allen said, referring to one of the old concrete tanks once used to store toxic waste. "Once they get done with the assessment of that site and the other Superfund Harris County sites, then they'll probably let us know, let the public know, what's been going on.

Unilever to Shed 1,500 Managers in Restructuring