Gov. Scott Walker signed a $3 billion incentive package Monday for Foxconn Technology Group to build a flat-screen plant in southeastern Wisconsin, a deal he says will provide thousands of jobs for generations. 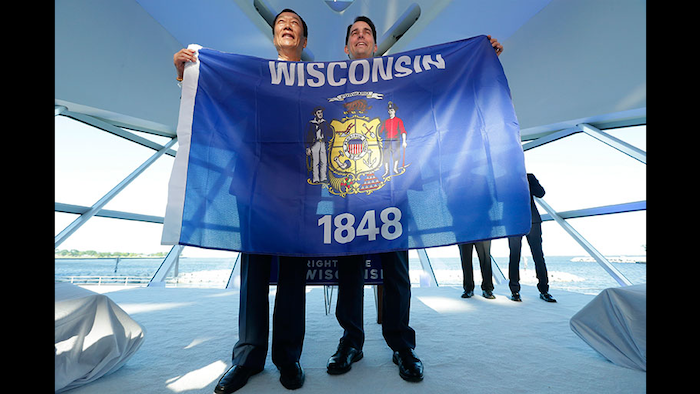 "This is about far into the future," Walker said. "This is about ensuring our children and our children's children will have those kind, of really, generational-type opportunities. This is one of those things that's transformational."

The governor told reporters after the signing that next steps call for the Wisconsin Economic Development Corporation to finalize a contract with Foxconn to execute the provisions in the bill. WEDC's board is scheduled to meet Sept. 28 to approve the agreement. Foxconn executives will then likely reveal the precise location for the plant before the contract is signed in early October.

Walker told WTMJ-AM radio on Monday morning that he expects groundbreaking this spring. Foxconn hopes to open the plant in 2020.

No one from Foxconn attended the event. Walker said the company's leaders planned to visit the state for the contract signing.

The bill provides nearly $3 billion in cash to Foxconn if it invests $10 billion in a new flat-screen factory in southeastern Wisconsin and employs 13,000 people. The measure provides $150 million in sales tax exemptions on construction equipment and allows the company to build in wetlands and waterways.

The package gives the conservative-leaning state Supreme Court the option to take appeals of circuit court decisions related to the Foxconn project directly rather than having them heard by an intermediate appellate court. Any lower court decision would be automatically stayed during the appeal.

The bill also calls for borrowing $252 million to rebuild Interstate 94 near the plant site but makes spending the money contingent on a federal match and approval from the Legislature's budget committee. Walker used his veto power Monday to eliminate the budget committee from the process, saying creating ambiguity about the availability of the state dollars could push the federal government to send potential matching dollars to other states.

Walker and supporters are heralding the deal as a once-in-a-lifetime opportunity to make the state a hub for the high-tech electronics industry. Foxconn is the world's largest contract manufacturer of electronics and is best known for making iPhones.

Opponents have decried the deal as a giveaway to Foxconn, saying it hasn't provided enough guarantees to protect taxpayers in case workers are laid off or Foxconn leaves the state. An analysis by the nonpartisan Legislative Fiscal Bureau found it will take at least 25 years for Wisconsin taxpayers to break even on the incentives.

Walker told reporters after the signing he believes Foxconn will uphold its pledge to create thousands of jobs.

"I'm more than confident this will happen," Walker said moments before he signed the bill.