Mine Dams Burst In Brazil Blanketing Area In Quicksand-Like Mud

Authorities said one person was killed, four were injured and 13 were missing. 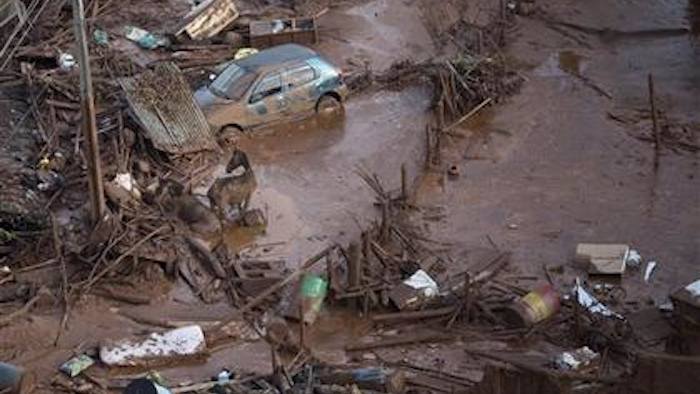 Brazilian rescuers searched feverishly Friday for possible survivors after two dams burst at an iron ore mine in a southeastern mountainous area. Authorities said one person was killed, four were injured and 13 were missing.

The Thursday afternoon rupture unleashed a mix of water and ore mining residue on a small village 7 kilometers (4 miles) downhill. Images from Globo TV showed the area awash in a sea of clay-red mud that tossed cars on their sides and blanketed buildings.

Authorities on Thursday said one dam at the Samarco iron ore mining operation had burst roughly 20 kilometers (12 miles) from the city of Mariana, which is 300 kilometers (185 miles) north of Rio de Janeiro.

But in a video posted later on Samarco's Facebook page, company President Ricardo Vescovi said two dams at the facility had failed. Officials have not said what caused the accident.

"Our focus in this critical moment is to preserve the integrity of people and of the environment," Vescovi said in the video. "We are deeply sorry and we are very moved by what happened, but we are also in full action to stop the damage caused by this tragic accident."

State fire department officials said Friday that the toll of 13 missing could rise, and that about 500 of the nearly 600 people thought to live in the area had been accounted for so far.

Brazilian television ran images of survivors taking shelter in a gym, where they picked through piles of donated clothing.

O Globo newspaper quoted Vinicius Teixeira of the fire department in state capital Belo Horizonte as saying rescue work was made difficult by the still-wet mud, which could behave like quicksand.

"Whoever steps on it runs a great risk of sinking and drowning in this mud," he said, adding that it reached roof-level in some areas. "There is a risk of bodies not being found."