China promised it will try to cap its rising emissions before 2030. 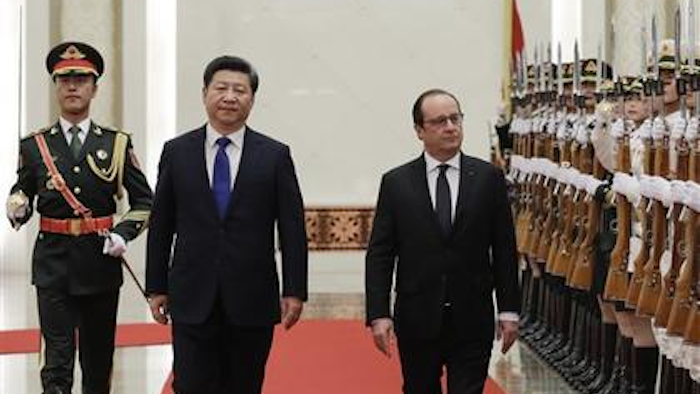 The Chinese and French presidents announced Monday they have agreed that a global climate change pact should require countries to review their emissions pledges every five years, in an important signal four weeks before world leaders meet in Paris.

France is proposing the automatic increase of countries' emissions targets in a climate deal to be thrashed out at a U.N. conference beginning at the end of November. French President Francois Hollande said Monday that he and his Chinese counterpart wanted "the necessary upward revision of the national pledges every five years" included in the Paris agreement.

Sitting next to President Xi Jinping, Hollande said at a news conference that upward revisions would be crucial to limiting global warming.

But a joint statement issued in the name of the two presidents limited the agreement to "a full review every five years of the progress made in order to reach the agreed long-term goals."

The support of China, the world's biggest emitter of greenhouse gases, is significant to any global deal to combat climate change.

In the joint declaration, the two presidents also declared their intention to release their own national strategies to develop low-carbon economies by 2050 as soon as possible within the next five years.

Environmental campaign group Greenpeace called the statement "an incremental step forward" and said work still needs to be done to raise ambition before and during the Paris conference.

"After waving goodbye to President Hollande tomorrow, Chinese leaders need to think hard about what more to bring to the table when they see him again in Paris at the end of this month," Greenpeace China climate policy adviser Li Shuo said in a statement.

China has promised it will try to cap its rising emissions before 2030 as part of its national pledge ahead of the Paris conference. It has also seen a decline in coal consumption and has become a leader in renewable energy.

Hollande said Xi confirmed that he would attend the opening of the climate conference, which runs from Nov. 30 through Dec. 11.