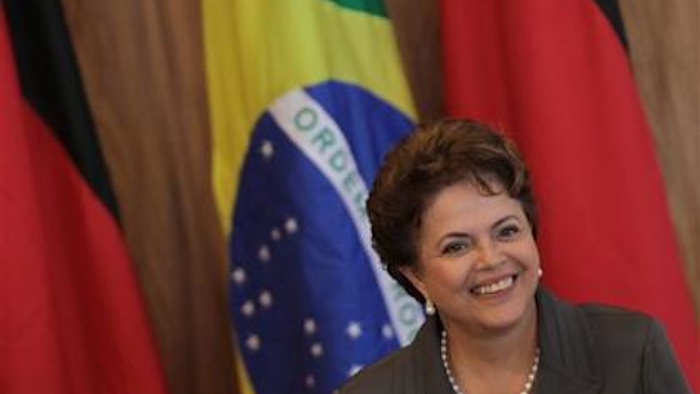 Brazil on Sunday became the first major developing country to pledge an absolute reduction in greenhouse gas emissions for an envisioned global pact against climate change.

The world's seventh biggest greenhouse gas polluter said it would cut its emissions by 37 percent by 2025 from 2005 levels by reducing deforestation and boosting the share of renewable sources in its energy mix. It also indicated an "intended reduction" of 43 percent by 2030.

"Our goals are just as ambitious, if not more so, than those set by developed countries," President Dilma Rousseff said as she announced the targets at the U.N. in New York.

In talks on a new climate agreement, set to be adopted in Paris in December, developed countries are expected to shoulder the biggest responsibility for cutting emissions of carbon dioxide and other greenhouse gases. For example, the U.S. has pledged to reduce its emissions by 26-28 percent between 2005 and 2025.

Major developing countries such as China and South Africa have pledged to rein in their emissions as their economies expand, rather than to slash them in absolute terms.

Brazil, however, has already achieved significant emissions cuts in the past decade primarily because of efforts to reduce deforestation in the Amazon.

Environmental groups tracking climate policy applauded Brazil for taking absolute reduction targets, but said they could have been even more ambitious.

"Ideally, we would have reached 1 gigaton by 2030. This pledge won't allow us to get to that number," she said.

Rousseff said that by 2030, Brazil, which has large dams, aims to get 66 percent of its electricity from hydropower and 23 percent from other renewable sources including wind, solar and biomass.

That's an increase from a joint announcement with the U.S. in June, when Brazil said it would double its non-hydropower renewable sources to 20 percent by 2030.

She also said that Brazil would strive to end illegal deforestation by 2030, a goal that Romeiro said it had previously hoped to achieve by this year.

A crunch issue in U.N. climate talks is how to divide the responsibility of fighting climate change between developed countries who have historically released the highest emissions and developing nations whose emissions are growing the fastest.

Environment Minister Izabella Teixeira told The Associated Press that Brazil's targets were consistent with its historical responsibility to deal with the problem.

Without naming anyone, she added that many countries say they want to fight global warming, "but when you check their numbers you see they are increasing their emissions."