As industrial robots become smarter, faster, more affordable, and develop advanced capabilities such as sensing, dexterity, memory and trainability, industrial manufacturers across industries are looking to advanced robotics to gain a...

PwC US and The Manufacturing Institute 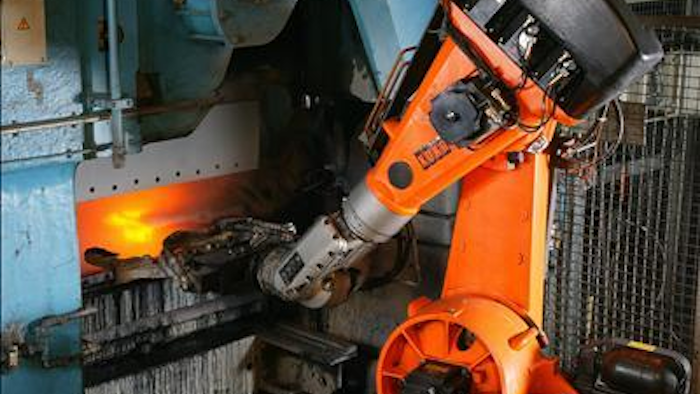 As industrial robots become smarter, faster, more affordable, and develop advanced capabilities such as sensing, dexterity, memory and trainability, industrial manufacturers across industries are looking to advanced robotics to gain a competitive business advantage, according to a report released today by PwC US in conjunction with The Manufacturing Institute. Based on a survey of 120 industrial manufacturers, The new hire: How a new generation of robots is transforming manufacturing found that while 59 percent of companies are currently using some form of robotics technology, barriers to adoption still exist due to limitations such as cost, the lack of perceived need, and access to expertise and skills.

According to PwC’s report, there are currently over 1.5 million robots working in factories across the globe, with an estimated 180,000 in the U.S. alone. That number is only expected to increase with the global industrial robot market estimated to reach $41 billion by 2020.

“The past several years have recorded a sharp resurgence in orders of industrial robots and this wider adoption comes at a time when manufacturers – both big and small – are trying to squeeze greater productivity from their workforce and respond quickly to customer preferences and expectations,” said Bob McCutcheon, PwC’s U.S. industrial products leader. “The manufacturing industry is primed for a more advanced integration of robotics and the speed of adoption continues to increase with every dollar invested in these new technologies. At PwC, we see this as the ongoing progression toward the ‘factory of the future,’ as disruptive technologies such as 3D printing and robotics have the ability to significantly improve efficiency, quality and operations.”

A flurry of investor activity has accompanied the rise in adoption of robots, particularly through venture capital investments. According to PwC, investments by U.S. venture capital firms in robotics technology companies rose to about $172 million in 2013, nearly tripling 2011 levels, providing a window into what the investment community believes will be a promising and profitable sector. It also indicates that the robotics industry could see an accelerated development as these venture capital-backed companies grow.

“The rise of robots is primarily attributed to large companies as they have the risk capital to deploy in robotics technology. Larger companies along with the venture community will accelerate adoption and drive down prices making robotics scalable for every size enterprise,” continued McCutcheon.

The role of robotics in a company’s changing or expanding operational footprint could be significant as manufacturers rethink the viability and attractiveness of offshoring. PwC’s report found that automation technology makes it easier for manufacturers to be closer to their customers and perform better for that local consumer, potentially leading to greater reshoring of manufacturing activity to the U.S. market. Machine-to-machine knowledge sharing allows companies to switch production from one locale to another, or from production of one product to another without considerable investments in talent, training, set-up time and related costs.  It may also help bring manufacturing back to the U.S. as businesses that deploy robotics look to skilled workforces to oversee these advanced manufacturers.

As the digital ecosystem continues to evolve with automation technologies gaining a larger presence in production facilities, distribution centers and through supply chains, manufacturers need to manage the benefits but also prepare for the implications of displacing human workers. According to PwC’s report, 27 percent of respondents believe the biggest impact of robots on the U.S. manufacturing workforce in the next three to five years will be the replacement of workers.

Conversely, a greater robotic workforce could potentially drive a need for more human talent to train and repair that growing workforce and develop the burgeoning technology. Thirty-five percent of respondents to PwC’s survey reported the biggest impact robots will have on the manufacturing workforce is that they will lead to new job opportunities to engineer advanced robots and robotic operating systems, followed by 26 percent who believe it will lead to more demand for talent to manage the robotic workplace.

“As companies continue to embrace robotics and other types of automation and become more data-driven, their success will largely hinge on shaping and building a workforce that can better leverage such technological advances. To do that, manufacturers are feeling a growing need to pull from a wider and deeper pool of talent,” said Gardner Carrick, Vice President, The Manufacturing Institute.

Despite strong momentum surrounding the development and adoption of robotic technology, there is still some resistance to its use, holding back widespread adoption. Of those surveyed who do not currently use advanced robotics technology, 27 percent listed the lack of perceived need as the biggest limitation for not adopting robotics in the next three to five years, followed by cost (26 percent) and insufficient resources and expertise (14 percent).

The new hire: How a new generation of robots is transforming manufacturingis the second segment in a three-part series of reports by PwC and The Manufacturing Institute on disruptive technology in the manufacturing industry. The first of the series: 3-D printing and the new shape of industrial manufacturingoutlines the opportunities and disruptions presented by 3D printing.