An internal Chevron surveillance video shows more than a dozen workers getting caught in the unknown substance and narrowly escaping the fire. 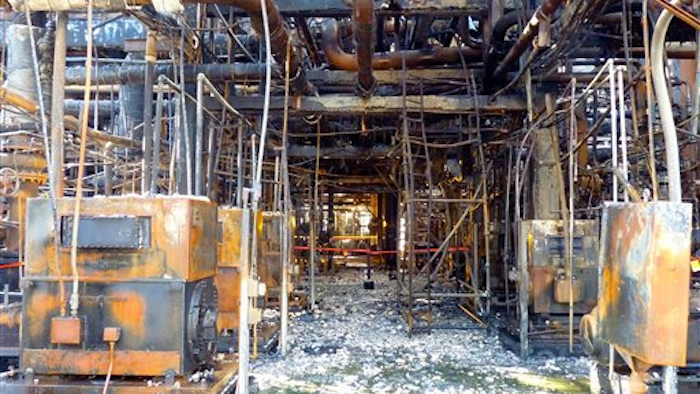 U.S. Chemical Safety Board officials said the video shows plant workers getting caught within the cloud shortly before the Aug. 6 blaze. More than a dozen workers managed to narrowly escape serious injury.

"Fortunately those personnel were able to extricate themselves from that cloud," said Don Holmstrom, the lead investigator for the U.S. Chemical Safety Board.

The vapor cloud was estimated to be about 150 to 200 feet high, as tall as the refinery tower. The blaze knocked an important refinery unit offline, reducing the facility's production and sending thousands of nearby residents to hospitals with breathing and eye irritation complaints.

Holmstrom said federal and state investigators were still trying to determine how to safely enter the area where the fire started. They want to examine a failed pipe blamed for the blaze, which Chevron chose not to replace nearly a year ago after an inspection.

Still, on Tuesday the charred crude unit was too hazardous to enter because of fire damage to structural beams and ongoing hydrocarbon leaks.

"There are one or more than one of these steel beams that have been compromised by the fire," said Daniel Horowitz, the chemical board's managing director, said. "The collapse of that structure is a risk we and others are unwilling to take so we can only approach (to about 10 feet) from the pipe."

Investigators said that distance is still too far for them to be able to make any visual judgments about how the pipe failed.

In addition to beams that were melted by the hot fire, the area is also being compromised by at least two small hydrocarbon leaks. The leaks pose a possible health concern for investigators, and have required them to strap on respirators when entering the area.

Investigators said the small leaks were not a danger to the nearby community, just to people working in the immediate area.

Horowitz said his team is meeting with Chevron Wednesday to determine how those leaks can be stopped. Currently, the company is spraying water on the leaks to ensure they don't catch fire.

The delays are worsening prospects for Chevron's ability to get the important unit back up and running. Horowitz said it would likely be three-to-four weeks before the damaged pipe can be removed for forensic testing.

The conflagration destroyed an area of the refinery that produces a large amount of the gasoline that satisfies California's clean-air regulations, which are the toughest in the nation.

Other parts of the refinery, which supplies 16 percent of California's daily gas consumption, are still producing fuels.

But the refinery's reduced output has sent state gas prices rising higher than normal, analyst said. The average price for a gallon of regular on Tuesday in California was $4.09, up from $3.86 last Tuesday.

A key target of the federal investigation is looking at why Chevron had not replaced the decades-old pipe after an inspection last November.

Chevron examined the 8-inch line that failed and a larger, 12-inch companion line linked to it last year. But the company decided the line was good for another five years of service.

The companion line, which was the same age as the pipe that failed, had been found to be too corroded to remain in service, investigators said.

The company has refused to speculate on when the unit will be back operational, but said it is cooperating fully with all of the investigations.

Meanwhile, Contra Costa County health officials said Tuesday that more than 9,000 people went to emergency rooms for breathing problems and other health issues that might have been caused by smoke from the fire.

Many people were sickened by particulate matter in the smoke, said Wendel Brunner, director of public health for Contra Costa County.

Two or three people were hospitalized, including a girl who was admitted to Children's Hospital Oakland after reporting her asthma was made worse by smoke, officials said.