Investigators were looking at how a small, seemingly insignificant leak quickly unraveled into an intense fire that sent acrid black smoke into the sky. 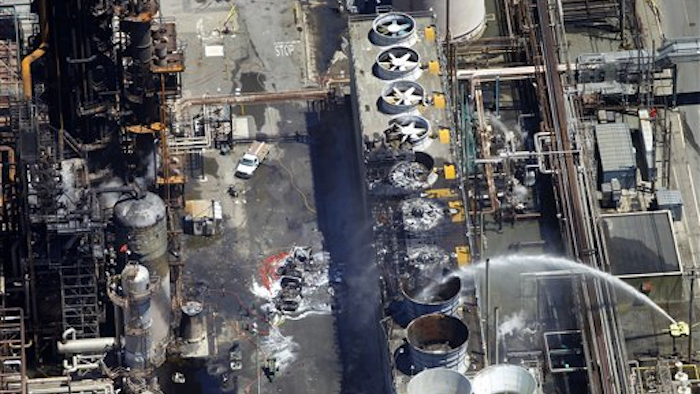 Firefighting crews continue to pour water onto a unit after a fire at a Chevron refinery on Tuesday, Aug. 7, 2012 in Richmond, Calif. The fire, which sent plumes of black smoke over the San Francisco Bay area, erupted Monday evening in the massive Chevron refinery about 10 miles (16 kilometers) northeast of San Francisco. It was out early Tuesday. (AP Photo/The Contra Costa Times, Aric Crabb)

RICHMOND, Calif. (AP) — Investigators were looking at how a small, seemingly insignificant leak at one of the country's biggest oil refineries quickly unraveled into an intense fire that sent acrid black smoke into the sky and hundreds of people to hospitals with health complaints.

The leak started as a drip at about 4:15 p.m. Monday, officials said. Chevron — which is required to "immediately" notify the public of any gas leak, fire or oil spill, according to state law — did not consider it an immediate danger to residents nearby.

"At that point in time, there really wasn't anything we could advise the community to do," said Mark Ayers, the refinery's fire chief. "We surely wouldn't advise anybody to shelter in place."

The company's engineers began stripping away insulation on the leaky pipe to investigate the source, which released a vapor of a flammable substance similar to diesel. About two and a half hours later, a conflagration had officials scrambling to warn residents to stay inside.

"We are still trying to determine whether Chevron gave timely notification," Sawyer said.

Richmond's mayor, some residents and community groups have criticized the company's response as too slow, marking the latest conflict between Chevron and the area's residents. The refinery has been the target of complaints and lawsuits by residents of the mostly low-income community about 10 miles northwest of San Francisco. The area is home to five major oil refineries.

Emotions ran high during a Tuesday night community meeting in Richmond, where hundreds of people heckled a panel of Chevron and local officials.

"I can assure you I have the utmost respect for this community," Nigel Hearne, the general manager of the refinery, said. Police officers lined the stage as the speakers left.

"We apologize for the fire and smoke caused by yesterday's incident," the company wrote in a statement. "Nothing is more important than safe operations and yesterday we did not meet that expectation."

"Investigators have notified us that Chevron's emergency response was excellent," Erika Monterroza, a spokeswoman for California's Division of Occupational Safety and Health, or Cal/OSHA, said. "Everyone was evacuated and Chevron set up an exclusion zone to keep people out of the area."

Still, Richmond Mayor Gayle McLaughlin said the fire was unacceptable and called for the company to improve its early-warning system.

"We live with the day-to-day risk of this type of manufacturing and refining that has an impact on our community with pollutants being released, but with the accident that happened yesterday, that doesn't mean it's acceptable, because it's not," McLaughlin said.

No patients were admitted to the facility, said Jessie Mangaliman, a spokesman for Kaiser Permanente.

Carol Bluitt, who lives blocks from the refinery, said she was traumatized by the blaze that darkened the sky for miles and smelled like burning rubber.

Firefighting crews continue to pour water onto a unit after a fire at a Chevron refinery on Tuesday, Aug. 7, 2012 in Richmond, Calif. (AP Photo/The Contra Costa Times, Aric Crabb)

"You could clearly tell it there was something toxic in the air. My eyes were really, really red and running," Bluitt said.

Bluitt said she went to the hospital Tuesday morning and complained that her chest was tight. They prescribed eye drops and an inhaler, she said.

The blaze in the refinery's No. 4 Crude Unit was contained in about five hours, Chevron said in a statement on its website. Three employees suffered minor injuries, according to the company.

County health officials used automated calls to warn residents of Richmond, San Pablo and the unincorporated community of North Richmond to stay inside and cover cracks around doors with tape or damp towels.

A fire at the refinery in January 2007 injured two workers and spewed low levels of sulfur dioxide and other toxins into the air. County officials said then that it was not enough to harm the health of nearby residents. That fire shut down the refinery for most of that year's first earnings quarter.

This latest disruption at one of the West Coast's big refineries was expected to affect gasoline prices in the region.

With inventories of gasoline in the region already low compared with the rest of the country, pump prices on the West Coast will soon average more than $4 a gallon, Kloza said.

Chevron spokesman Lloyd Avram said he did not know when the refinery could be restarted and declined to comment on the impact the shutdown might have on the gasoline market.

Analyst Patrick DeHaan of the website GasBuddy.com warned that Oregon and Washington would see a price hike soon.

"Spot prices have already increased by as much as 30 cents per gallon in some West Coast markets and that's before the refinery damage has been fully assessed," DeHaan said.