Nashville-based Gibson agreed to pay a $300,000 penalty as part of a settlement to "get back to the business of making guitars." 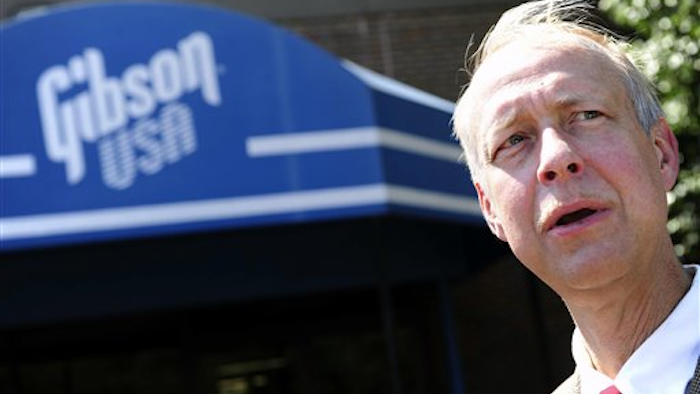 Nashville-based Gibson agreed to pay a $300,000 penalty, forfeit claims to about $262,000 worth of wood seized by federal agents and contribute $50,000 to the National Fish and Wildlife Foundation to promote the conservation of protected tree species.

"The agreement is fair and just in that it assesses serious penalties for Gibson's behavior while allowing Gibson to continue to focus on the business of making guitars," U.S. Attorney Jerry Martin said in a statement.

The privately held company is considered one of the top makers of acoustic and electric guitars, including the iconic Les Paul introduced in 1952.

"We felt compelled to settle as the costs of proving our case at trial would have cost millions of dollars and taken a very long time to resolve," CEO Henry Juszkiewicz said in a statement late Monday night.

"This allows us to get back to the business of making guitars," he said, noting that the settlement would allow them to continue sourcing rosewood and ebony from India as it has for decades.

Gibson's decision to cooperate with the federal Lacey Act banning the import of endangered wood products stood in contrast to a publicity campaign mounted in protest after agents raided Gibson facilities in Memphis and Nashville.

Republicans and tea party members had rallied behind Juszkiewicz at the time he denounced the raids as overzealous federal regulation that threatened American jobs. He reiterated the criticism Monday.

"We feel that Gibson was inappropriately targeted, and a matter that could have been addressed with a simple contact a caring human being representing the government," he said in his statement. "Instead, the Government used violent and hostile means with the full force of the US Government and several armed law enforcement agencies costing the tax payer millions of dollars and putting a job creating US manufacture at risk and at a competitive disadvantage.

A few weeks after the raids, a company spokesman claimed that a federal agent had "lied" in affidavits claiming the CEO knew the wood seized by authorities was illegally imported.

Those affidavits supporting the search warrant that authorized the raids alleged that shipments of imported Indian ebony and rosewood were given false labels to circumvent import restrictions.

The settlement says a Gibson employee learned during a 2008 trip to Madagascar — the source of some of the ebony wood that was seized — that it was illegal to import unfinished wood and sent a report about it to his superiors, including company President David Berryman.

The exotic woods used in such guitars are considered integral to the sound. And artists who have played Gibson instruments range widely from Chet Atkins and Maybelle Carter in country to Pete Townshend of The Who and Eric Clapton in rock to Larry Carlton and Paul in jazz.

George Gruhn, who owns a vintage guitar shop in Nashville, said he wasn't surprised that Gibson officials accepted the settlement.

Gruhn said the resolution of the Gibson case doesn't ease his concerns about the Lacey Act, which initially halted the trade in endangered wildlife goods, like ivory, but in 2008 added rare woods to the import ban.

"The problem is that virtually every instrument prior to 1970 contains Brazilian rosewood," he said. "Even on a Gibson LGO, which was their cheapest student guitar."

Justice and Interior Department officials said in a September letter that those who "unknowingly possess" an instrument made from illegally imported materials don't have a criminal problem.

Last year, Blackburn and fellow U.S. Reps. Jim Cooper of Nashville, a Democrat, introduced legislation they said would protect people from charges for unknowingly possessing illegally imported wood, and would require the federal government to establish a database of forbidden wood sources.

A coalition of environmental, logging industry and musicians' groups oppose the measure.