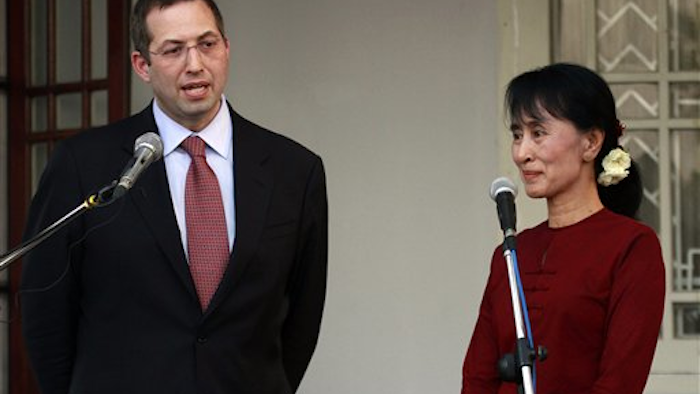 In this photo taken on March 14, 2012, Derek Mitchell, left, then U.S special envoy to Myanmar, speaks during a press conference after meeting with opposition leader Aung San Suu Kyi, right, at her residence in Yangon, Myanmar. (AP Photo/Khin Maung Win)

WASHINGTON (AP) — The Obama administration gave permission Wednesday for American companies to invest in Myanmar and work with its state oil and gas enterprise, a go-ahead that marks the most significant easing of U.S. sanctions against the former pariah nation.

At the same time, the administration expanded U.S. Treasury authority to punish those who undermine the nascent political reforms and sanctioned a Myanmar military industry involved in a deal for ballistic missile technology from North Korea.

The new restrictions, imposed even as the 15-year-old ban on investment and export of financial services was eased, underscored how far the country also known as Burma has to go before it truly cleans shop after five decades of military rule.

The announcement came hours after Derek Mitchell, the first U.S. ambassador to Myanmar in 22 years, presented his credentials in the Asian nation's remote capital. Washington has normalized diplomatic relations, the culmination of a three-year push to help Myanmar out of international isolation and lessen its reliance on its chief but distrusted ally, China.

But human rights groups and business advocates are increasingly at odds over how Washington should respond to the changes in Myanmar, and Wednesday's announcement exposed a rare difference between the administration and Suu Kyi, long a guiding force on U.S. policies toward the country.

Last month, the Nobel Peace laureate advised foreign companies not to invest in the state-run Myanma Oil and Gas Enterprise until it became more accountable and open. Doing business with the oil company is the only way to gain access to Myanmar's potentially lucrative energy resources, and U.S. companies fear with that without that opportunity, they will lose out to foreign competitors.

The administration argued that working with U.S. companies — that face tough anti-corruption constraints under U.S. law — could improve the situation.

"By allowing deals with Burma's state-owned oil company, the U.S. looks like it caved to industry pressure and undercut Aung San Suu Kyi and others in Burma who are promoting government accountability," said Arvind Ganesan of Human Rights Watch.

Aung Din of the U.S. Campaign for Burma, a Washington-based activist group, said the decision "will be appreciated by the Burmese generals, cronies and U.S. corporations, but not by the people of Burma."

The U.S. Chamber of Commerce commended the easing of sanctions. Its vice president of international affairs, John Murphy, said every other major economy, including Australia, Canada, and the European Union, has moved more swiftly than the U.S., and continuing sanctions would have only added to the head start for Asian and European companies.

"It's a false choice to say we have to choose between human rights and business interests in Burma," he said in a statement. "Ensuring U.S. companies have a strong presence in Burma will help raise labor and environmental practices and corporate social responsibility."

Western nations have moved swiftly in recent months to roll back sanctions, particularly after special elections that saw Suu Kyi elected to parliament after 15 years of house arrest. Governments have expressed hope that can bolster Thein Sein and help him win over military hardliners suspicious of the reform agenda and improve life in the impoverished nation.

Mindful of concerns over corruption and rights abuses, the administration said U.S. companies with more than $500,000 in aggregate new investment will be asked to file an annual report disclosing their procedures on human rights, land acquisitions, the environment and payments to Myanmar government entities. Additionally, companies have to notify the State Department within 60 days of investing with the Myanma Oil and Gas Enterprise.

National Security Council spokesman Tommy Vietor said the country's oil company merited closer oversight than other companies and the U.S. is working hard with that enterprise and the Myanmar government to quickly improve its operations.

"We believe that there will be benefits both to the people of Burma and to U.S. investors in allowing U.S. companies, in a careful, calibrated and responsible manner, to engage with MOGE," Vietor said in an email.

Human Rights Watch said the reporting requirements for U.S. investors were useful and innovative but would not erase the risk of companies becoming involved in rights abuses and corruption.

American investment is still forbidden with military-owned companies, and the administration sanctioned the Directorate of Defense Industries, which it said had carried out missile research and development at its facilities in Myanmar, where North Korean experts are active. The administration said in November 2008 that military officials, including the directorate's head, had signed a memorandum of understanding with North Korea to provide assistance to Myanmar to build medium-range, liquid-fueled ballistic missiles, and in the past year, North Korean ships have continued to arrive at Myanmar's ports carrying goods destined for its defense industries.

The U.S. and other governments have repeatedly urged Myanmar to sever its military ties with Pyongyang and to step up its engagement with the International Atomic Energy Agency to allay any lingering concerns it may have sought nuclear weapons, possibly with North Korean help.

The military is also accused of continuing serious human rights abuses, particularly in ethnic minority regions where it is fighting insurgents. And despite releases of hundreds of political prisoners by Thein Sein over the past year, the U.S. government says hundreds more are still detained.