Products advertised as free of a so-called "toxic trio" of chemicals actually have high levels of agents known to cause birth defects. 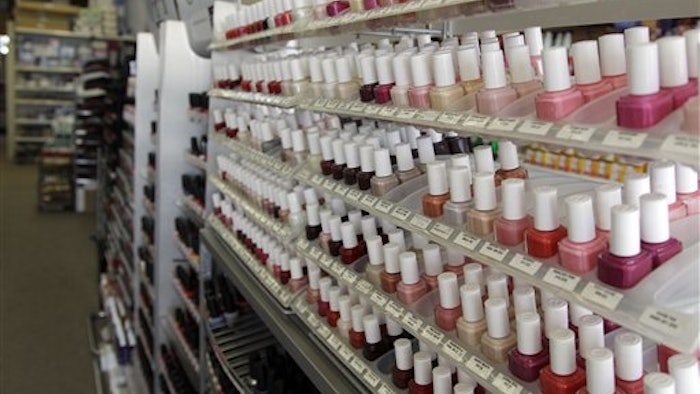 SAN FRANCISCO (AP) — Some nail polishes commonly found in California salons and advertised as free of a so-called "toxic trio" of chemicals actually have high levels of agents linked to birth defects, according to state chemical regulators.

A Department of Toxic Substances Control report to be released Tuesday determined that the mislabeled nail products have the potential to harm thousands of workers in more than 48,000 nail salons in California, and their customers.

The use of the three chemicals in nail products is not illegal if properly labeled. But agency officials said the false claims may be a violation of a state law that requires disclosure of harmful chemicals in consumer products. A final decision on whether the companies will face legal action, which can include fines and an order to attach warning labels to their products, will be made by the state attorney general.

Investigators chose 25 brands at random, including a number of products claiming to be free of the chemicals toluene, dibutyl phthalate (DBP) and formaldehyde, which are known as the toxic trio. Regulators said exposure to large amounts of the chemicals has been linked to developmental problems, asthma and other illnesses.

Investigators found that 10 of 12 products that claimed to be free of toluene actually contained it, with four of the products having dangerously high levels.

The report also found that five of seven products that claimed to be "free of the toxic three" actually included one or more of the agents in significant levels.

The agency said it did not have enough data to accurately estimate how many people were being exposed to the chemicals through the products.

"We know there are exposures at salons, both to workers and customers, and we're concerned about potential harm," said Karl Palmer, the DTSC's pollution prevention performance manager who oversaw the report.

"Our strategy first and foremost is to shed light on the reality of what's in these products and put this information out to everyone."

The DTSC said all three chemicals are linked to chronic health conditions when inhaled, and that the 121,000 licensed nail care technicians who work in the salons, many of them young Asian-American women, are most at risk.

The agency said the salons are often poorly ventilated, leading to exposure to a number of harmful chemicals.

Loann Tran, co-owner of Happy Nails in Salinas, Calif., said she can only control certain elements of workplace safety for the handful of workers and customers in her salon: better ventilation and equipment sterilization. She cannot force manufacturers to accurately label products, she said, and hopes the report will help.

"They have to be responsible for what they are doing with their products, it's shocking," Tran said. "We work in this field, and we need this knowledge to help make our environment healthier."

Because of these workplace health issues, some cities around the nation have passed laws seeking to increase safety for workers and customers at nail salons.

San Francisco passed an ordinance in October 2010 that gives a "green seal" to salons that voluntarily choose to use nail polishes free of the three chemicals included in the DTSC's report. New York City had a similar ordinance to recognize salons that choose products devoid of the toxic trio.

"We are alarmed by the results of this report," Julia Liou, co-founder of the California Healthy Nail Salon Collaborative and a public health administrator for Asian Health Services, said in a statement. "The misbranding of products is not only a major public health problem, but also interferes with a salon worker's right to a safe and healthy work environment."

DBP has been banned in nail products in the European Union, which has strict limits on the amount of formaldehyde and toluene that can be used.

Doug Schoon, a scientist who works with the Nail Manufacturers Council, agreed that mislabeling products should never be done, but said that proper ventilation and training of salon workers are much more important to preventing negative health effects. He said the levels of toluene and other chemicals found in the nail polishes featured in the report did not pose a serious threat.

He said the "need for appropriate ventilation for the work you're doing, whether it be in printing shops or other workplaces, is a huge area of opportunity that the (DTSC) should be focusing on."

The California attorney general's office said it will have to review DTSC's findings before making a decision on any legal action.

"We will need to examine the data for compliance with Prop. 65 and other state laws," said Lynda Gledhill, a spokeswoman for the attorney general's office.

Proposition 65 is a state law that requires that all harmful chemicals in a product be revealed by the manufacturer. It requires warning signs be posted in areas where consumers could be exposed.

Mike Vo, vice president of Miss Professional Nail Products Inc., the maker of the Sation products and others on the list, said he disputed DTSC's findings.

"We will look at the report and challenge it," he said.