The International Union of Operating Engineers argues that by defunding union dues, the new law will infringe upon unions' free speech rights. 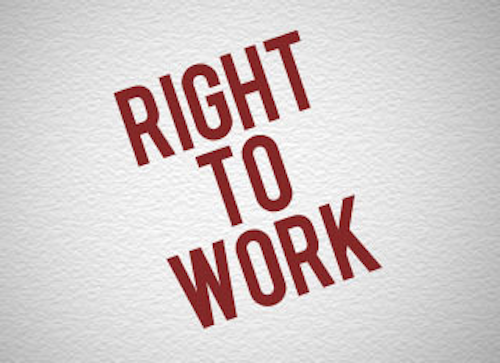 INDIANAPOLIS (AP) — Indiana's new right-to-work law should be struck down because it infringes upon unions' free speech rights by depriving them of the dues that fund their political speech, attorneys for a union challenging the law contend, citing the U.S. Supreme Court's so-called Citizens United ruling that eased restrictions on corporate campaign spending.

Attorneys for the International Union of Operating Engineers Local 150 argue in a court brief that Indiana's new law, which allows workers to not pay union dues even if a union bargains on their behalf, interferes with the union's free speech rights and "impinges on this fundamental right of union membership."

The argument is just one of many tucked into the hefty 45-page brief the union filed in federal court late last month in response to the state's motion to dismiss the lawsuit. A hearing on the state's motion is scheduled for April 26 in U.S. District Court in Hammond.

Along with other arguments based on state and federal constitutions and federal labor law, the union cites the 2010 Citizens United decision, which struck down on free-speech grounds restrictions on corporations' and union spending on advertising endorsing or opposing certain candidates.

The Indiana union's lawyers contend that the right-to-work law interferes with the union's free speech rights by stifling the collection of money that helps pay for its political speech.

"In this case, the state of Indiana restricted a channel of speech-supporting finance," the union brief maintains. "The Union legitimately utilizes dues money collected through the agency shop provisions in its collective bargaining agreements, in part, to finance political speech The Indiana Right to Work law prohibits agency shop agreements, and that prohibition restricts a channel through which speech-supporting finance might flow."

Adam Skaggs, a lawyer with the Brennan Center for Justice at New York University School of Law, said it would be a "stretch" to read the Supreme Court decision in such a way because the ruling is about spending money, not collecting it.

"I'm not sure that Citizens United is going to bear the weight they're attempting to put on it," Skaggs said.

Jim Bopp, the Terre Haute lawyer and Republican activist who crafted the argument that resulted in Citizens United, said a ruling accepting the union's argument would "turn Citizens United on its head."

"The free speech is for you to speak ... it's not that you have the authority to have others pay for it," he said.

Bopp also was involved in organizing funding for ads advocating passage of the Indiana right-to-work law.

The head of a national right-to-work group that lobbied for the law's passage agreed.

"The notion that a union's First Amendment rights are being violated is suspect," said Mark Mix, president of the Virginia-based National Right to Work Legal Foundation, which has asked permission to file a friend of the court brief in the case. "To make that case, one must assume that everyone in the union agrees with how money is spent."

"Shouldn't freedom of speech be about voluntary speech as opposed to compelled speech?" he added.

But Dale Pierson, one of the attorneys representing Local 150, said workers don't have to pay for union speech with which they don't agree. Federal courts settled that issue decades ago, he said, holding that workers could only be required to pay the union the cost of representing them.

"They don't have to and they haven't been. They have a right to opt out and pay just their fair share of collective bargaining," Pierson said.

Under right-to-work, he said, workers don't have to pay even that. That violates a provision of Indiana's constitution that says no one has to provide services without just compensation, he said, since federal law requires the union to represent all the workers.

"We think that's going to be one of the strongest legal arguments for striking down this right-to-work law," Pierson said.

Attorneys for the state say in their 14-page response to the union that the First Amendment arguments are out of place because the union didn't raise them in its original complaint. They concede that the legal strategy, however, is "understandable because right-to-work laws have not been stricken on First Amendment grounds."