Chocolate is certainly the flavor of the month with Valentine’s Day looming large. Manufacturing chocolate is far from a simple process. Often overlooked, a key factor that helps to deliver success is temperature control. 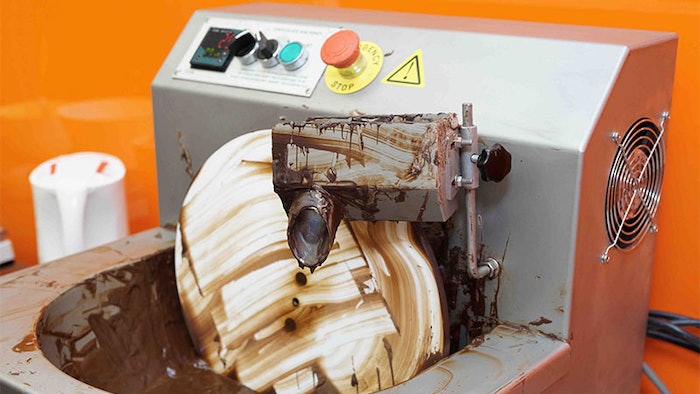 There is an argument to be made that there is no factor more influential in the manufacture of food than temperature (and its near neighbor, time). Boiling, roasting, frying, chilling, freezing, sterilizing, pasteurizing – one or more of these is fundamental to the production of most types of food, from ingredient storage to processing to packing to distribution.

There is equally an argument to be made that no food type is more susceptible to temperature than chocolate – not only in its ‘basic’ form, but in the crucial role that temperature plays in determining the quality and characteristics of the finished product.

What follows is, necessarily, a simplification of what is an incredibly sophisticated process, developed over hundreds of years and a process subject to sometimes significant adaptation by each chocolate manufacturer.

It all begins with the roasting of the beans. Well, not quite.

Cocoa beans are prone to e.coli and salmonella bacteria, and must therefore be pasteurized at around 130 degrees for five minutes. That’s the same as for any other food that is susceptible to contamination: any pathogens need to be inactivated.

When the beans are shipped to manufacturers from places such as St Lucia, they have already established 80% of their flavor through fermentation on the estate. They then use the roasting stage and recipe development to create the final flavor profile of the couverture. The roasting time and temperature depends on the beans themselves. Beans from Vietnam are much smaller so chocolate manufacturers roast for 20 minutes at 255°F, whereas St Lucian beans are much bigger, so they are roasted for 30 minutes at 265°F. Keeping the temperature below 285°F helps preserve the flavors of our single origin beans. Roasting above this temperature is used for beans that don’t have much of their own unique flavor so a ‘roasted’ note is created as part of the chocolate profile.

The next stage in the process involves what the chocolate industry knows as the ‘nibs’ – what’s left over once the cocoa shells have been removed by winnowing. The nibs are roasted – and again, the duration and temperature of the roasting is determined by the type of nibs, and the outcome desired by the manufacturer.

Some manufacturers grind nibs for 72-96 hours, depending on the recipe. When they start the process, they use temperature to warm up the machine but once the process has been started the grinding of the nibs creates its own heat through friction. It will maintain its own temperature at around 120-130°F. Temperatures above this could caramelize the milk or sugar powders and create an undesired flavor.

The roasted nibs are then ground and liquefied to produce chocolate liquor (which, incidentally, tastes nothing like chocolate) and then is usually pressed to extract cocoa butter, with the remaining solids being processed to create chocolate powder. One of the wonders of the chocolate manufacturing process is that, having separated the two key constituents of chocolate at the outset, they are subsequently recombined.

An interesting side note: there have been numerous studies published on the beneficial impact on health of consuming chocolate on account of it containing antioxidants, flavanols and polyphenols. It is said that processing it in these early stages at temperatures lower than 115°F preserves higher levels of these.

The role of cocoa butter in chocolate manufacturer cannot be overstated, by the way: a key property it brings with it is that it remains a solid at room temperature, but melts at 90–100°F, which is why chocolate is transformed when placed in the mouth.

No discussion of chocolate manufacture is complete without mentioning conching. A process unique to chocolate-making, it is the step that immediately follows the addition of other ingredients to the mix (which may include sugar or milk) and is perhaps the single biggest contributor to the organoleptic qualities of the finished product. In conching, metal rollers or mixers grind or knead the mixture to refine and blend it, with heat from the friction turning it into, and maintaining it in, a liquid state. The process looks to m=ain a temperature of around 175°F. Air flowing through the conche removes unwanted acids; moisture is reduced by the process; and substances produced in the original roasting are oxidized, creating a more mellow flavor.

Conching transforms what would otherwise be a gritty and uneven texture into the characteristic smooth mouthfeel of chocolate. One of the key contributors to the price of premium chocolate is the length of time it has been conched: while 4-6 hours is generally considered adequate, gourmet chocolate may have been conched for up to 80 hours – adding significantly to manufacturing cost. This results in particle sizes that are smaller than the distance between human taste buds and increases the ‘velvety’ sensation on the tongue. Conching also changes the flavor distribution within the chocolate, with extended conching creating a homogeneity that gives high end chocolate its unique taste.

Here again, control of temperature is critical. The temperature can rise up to 176°F for dark chocolate, but should not exceed 131°F for milk chocolate to avoid caramelization.

As well as taste and mouthfeel, however, there are other characteristics we associate with great chocolate.

Chocolate needs to have shine. It also needs to have that characteristic sharp ‘snap’, have a pure color and be resistant to fingerprints. These characteristics are all achieved by what is perhaps the most temperature-critical part of the chocolate manufacturing process: tempering. Tempering is a highly controlled process which sees the temperature of the chocolate very gradually raised, gradually lowered and gradually raised again in order to form exactly the right kind of crystals.

For tempering, chocolate manufacturers use a cooling tunnel that takes the chocolate from ambient air temperature down to 45-55°F and then gradually back up to ambient temperature again.

Why tempering? Cocoa butter comprises several glycerides of fatty acids – which solidify at different temperatures. When the liquid chocolate is cooled, fatty acid crystals form nuclei around which the other fatty acids will crystallize – creating a single, stable form. Once that action has taken place, however, the temperature needs to be raised to prevent them from solidifying. The binding which takes place during tempering also makes the product resistant to developing chocolate bloom – the white film that can form on the surface.

Manufacturers have their own ideas about tempering temperatures, but a rule of thumb would see:

And that’s about it. Now, the chocolate is ready for molding.

The viscosity of the chocolate is an essential attribute. Maintaining the correct temperature ensures that it is neither too liquid nor too solid so measuring and controlling temperature is critical to everything done during the manufacture of chocolate.

Making chocolate is typical of the food and beverage manufacturing environments for which the MAXVU temperature controller from West Control Solutions was designed. The compact MAXVU controller delivers easy set-up (taking a minute or less), simplicity in operation and cost-effectiveness, making it a ‘best fit’ for less-demanding temperature control applications.

In spite of its simplicity, however, functionality is not compromised. Less commonly required functions and parameters, for example, are available yet not displayed in the quick-start menu for convenience. The MAXVU also offers class-leading brightness, clarity and simplicity of its display. This makes it highly flexible in deployment, as the display is visible from long distances and wide angles.

Human consumption of chocolate is said to date back to around 2000BC. It’s said to derive its name from what the Mayans called it – ‘xocolatl’, which means ‘bitter water’. Perhaps if they’d known what we know now about the importance of roasting, conching and tempering, and the critical role temperature control plays at each stage of the chocolate manufacturing process, we’d have had a different name for one of life’s most important treats.