Environmental groups are concerned about protected species in the area. 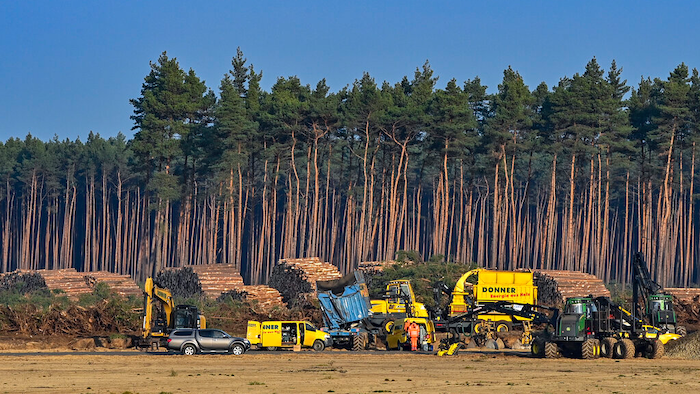 Felled trees lie on the construction site of the Tesla Gigafactory in Gruenheide near Berlin, Germany.
Associated Press

BERLIN (AP) — A German court has ruled that automaker Tesla Inc. has to stop clearing trees on the site where it's building its first electric car factory in Europe, the news agency dpa reported Thursday.

The top administrative court in the Berlin-Brandenburg region decided on a temporary ban for the clearing of the forest outside the German capital, after two environmentalist groups appealed against a lower court's decision to allow the felling.

A court official said the ban would last until a decision was made on the appeal by the environmentalist groups NABU and Gruene Liga, dpa reported. The factory is meant to open next summer.

The groups claim that animals living in the forest haven't been safely resettled before the clearing of the trees in an area of 83 hectares (200 acres). Specifically, the environmentalists worry about sand lizards and smooth snakes, NABU wrote on its website.

Both are protected species in Germany.

The company wants to start manufacturing 150,000 electric cars a year in the new plant from mid-2021, with plans to increase that number to half a million annually.

Palo Alto, California-based Tesla announced late last year that it had decided to build its first European factory in the Berlin area. The planned site is at Gruenheide, just east of the capital in Brandenburg state.