NEW DELHI (AP) — Expectations were high when five big, developing nations in 2009 joined as the so-called BRICS. The cooperation of the fast-rising economies driving world growth seemed to herald a new era of putting poverty alleviation and infrastructure development first. The five BRICS... 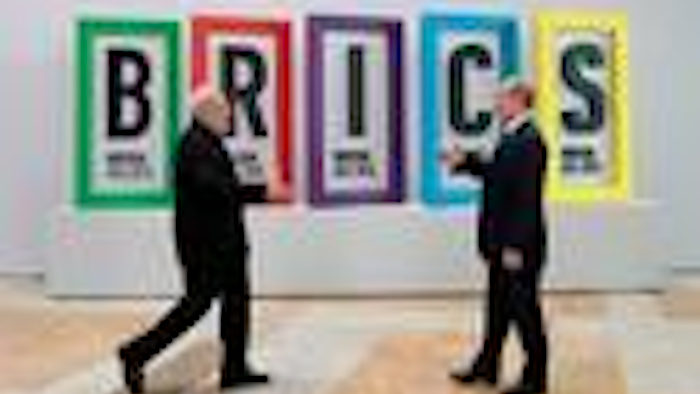 NEW DELHI (AP) — Expectations were high when five big, developing nations in 2009 joined as the so-called BRICS. The cooperation of the fast-rising economies driving world growth seemed to herald a new era of putting poverty alleviation and infrastructure development first.

The five BRICS countries — Brazil, Russia, India, China and South Africa — do not lack for heft. They represent nearly half the world's population and a quarter of its economy, at a combined $16.6 trillion. But at a summit in the western Indian state of Goa this weekend, their leaders will be struggling to temper their tendency to compete, rather than collaborate, in boosting their slowing economies.

The authoritarian systems in Russia and China diverge from the lively democracies in India, South Africa and Brazil. Conflicting alliances with non-BRICS countries mean the group is unlikely to reach a consensus over issues such as the war in Syria or tensions in the South China Sea.

Within their ranks, the four other nations are chafing at China's increasing dominance in manufacturing and trade and seem unlikely to support a push by Beijing for more open markets when they are striving to keep their own heads above water.

"BRICS is still a work in progress," says H.H.S. Vishwanathan, a former Indian diplomat in the U.S. and several African countries. "If one looks at statements from the last seven summits, the agenda of the group is constantly evolving and expanding."

Chinese academics and analysts have floated the idea of pushing for a free-trade agreement among the BRICS. A Chinese Commerce Ministry spokesman said last month that, while China hasn't made such a proposal formally, it believes that removing tariffs and other barriers could be important for practical cooperation between the five nations.

Such an idea would likely fall flat with other BRICS countries anxious over cheap Chinese goods flooding their markets and already burdened by huge trade deficits with Beijing.

"It is likely the Chinese may not bring it up at all, because they would not want to be in an embarrassing position," Vishwanathan said. "This is a nonstarter for the BRICS."

In Goa, the BRICS leaders are likely to buttress their development-focused economic agenda with a decision to establish their own credit-rating agency, which they argue would treat developing countries more fairly than existing ones favoring Western economies.

"While we cannot expect any big announcement over a BRICS free trade arrangement, the Goa summit statement will reflect the desire of the five to strengthen trading arrangements to push intra-BRICS trade," said Samir Saran, vice-president of the Observer Research Foundation think tank in New Delhi and a member of the BRICS Think Tank Council.

To date, the BRICS group's biggest achievement has been launching a financing alternative to the International Monetary Fund and World Bank intended to expand lending for infrastructure projects, initially within their countries. The Shanghai-based New Development Bank approved its first set of loans totaling $911 million this year for renewable energy projects in the five founding member nations.

"The fact that the NDB was created in three years and has already cleared more than $900 million worth of projects this year is quite creditable," said Vishwanathan, the former Indian diplomat.

Overshadowing the meeting in Goa is the hard reality of slowing growth around the globe.

China's expansion has slowed to its slowest pace in 25 years, though it is still near a robust annual pace of 7 percent.

Russia has been flummoxed by declining oil prices. Brazil is just emerging from its worst recession since the 1930s. South Africa's economic turmoil could lead to its credit rating being downgraded to junk by the year's end.

India, with an economy growing at a 7.5 percent pace, is still failing to create the 1 million new jobs it needs each month as enormous numbers of youths join the work force.

Still, they still have the potential to alter the order of world trade, said Biswajeet Dhar, an economics professor at New Delhi's Jawaharlal Nehru University. Other trading arrangements, such as the WTO, are heavily influenced by the industrialized countries, he notes. And a U.S.-led push for a Pacific Rim trade block, the Trans-Pacific Partnership, has yet to take off.

"This is the opportunity for the BRICS countries to craft a more equitable global trading order," Dhar said.

AP researcher Yu Bing in Beijing contributed to this report.