The Latest: Plane that crashed had 2 sets of controls

EAST HARTFORD, Conn. (AP) — The Latest on a small plane crash in East Hartford, Connecticut, near jet-engine maker Pratt & Whitney (all times local): 11:40 a.m. Police say there were two sets of controls aboard a small plane that crashed in Connecticut with a flight instructor and student on... 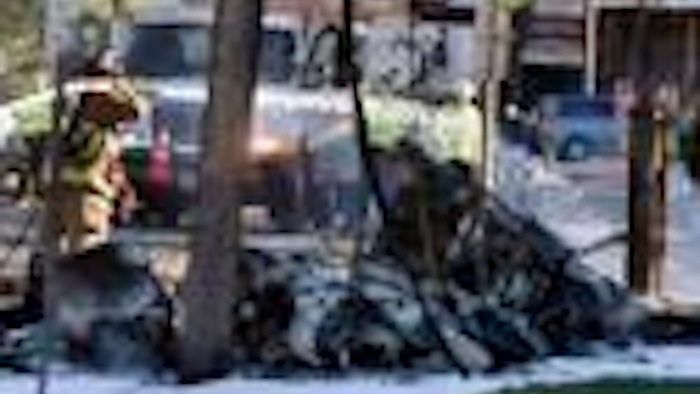 Police say there were two sets of controls aboard a small plane that crashed in Connecticut with a flight instructor and student on board, killing one of them.

East Hartford police Lt. Joshua Litwin told reporters Wednesday that he didn't know who was controlling the plane when it crashed on a road.

One person was killed and another survived when the Piper PA-34 Seneca crashed Tuesday afternoon as they were trying to land at Brainard Airport in Hartford, just across the Connecticut River from the crash site. It wasn't immediately clear whether the instructor or student had died.

Litwin says the person who escaped the wreckage is being treated for burns and is expected to survive.

The cause of the crash remains under investigation.

The mayor of East Hartford, Connecticut, says the survivor of a small plane crash near a military jet-engine manufacturer told authorities that it was intentional.

Mayor Marcia Leclerc (leh-CLAIR') told The Associated Press on Wednesday that the survivor told local detectives the crash was not an accident. Leclerc cautioned that the information has not been confirmed.

Authorities say a student pilot and an instructor were trying to land the Piper PA-34 Seneca at Brainard Airport in Hartford when it struck a utility pole and crashed around 4 p.m. Tuesday, bursting into flames. The pilot is hospitalized with serious burns and the passenger is presumed dead.

East Hartford police asked the FBI to assist the investigation because it happened near Pratt & Whitney, which makes military and commercial jet engines.

The police chief in East Hartford, Connecticut, has asked the FBI to assist the investigation into a fatal plane crash because it happened so close to Pratt & Whitney corporate headquarters.

The Federal Aviation Administration and National Transportation Safety Board are also involved in the investigation.

Authorities say a student pilot and an instructor were trying to land the Piper PA-34 Seneca at Brainard Airport in Hartford when it struck a utility pole and crashed onto the road around 4 p.m. Tuesday, bursting into flames.

Police say the pilot was hospitalized with serious burns and the passenger was in the wreckage and presumed dead. Police haven't released names.

Two people in a minivan were taken to a hospital with minor injuries.