SAMUT SAKHON, Thailand (AP) — Facing international pressure over human trafficking in its seafood sector, Thailand promised almost a year ago to compensate victims of slavery and industry leaders vowed to bring all fish processing in-house. That hasn't always happened. Instead, some formerly... 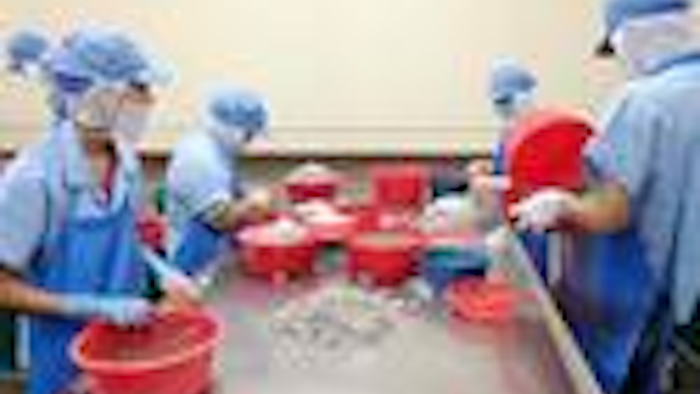 That hasn't always happened. Instead, some formerly enslaved shrimp peelers have been deported. Shrimp peeling sheds are being inspected and authorized to keep operating.

The Associated Press found that while some Thai companies that export shrimp to the U.S. have given formerly entrapped workers better jobs in-house, others still use middlemen who employ laborers in remote, guarded warehouses.

Shed owners frequently break environmental, labor or safety laws. Seventy-five percent of the 109 inspected so far this year were cited for violations, and 24 were ordered to close.

Human-rights and media reports documenting abuse in Thailand's $7 billion annual seafood export industry have brought international pressure. Last year, the AP reported on slavery inside the Gig Peeling shed outside Bangkok in Samut Sakhon, where more than 100 people were locked inside and forced to work 16 hours a day, ripping guts, heads and tails off shrimp that entered supply chains of most major U.S. supermarkets and companies including Red Lobster, Whole Foods and Wal-Mart.

One of the workers, Tin Nyo Win, ran away and told police, who raided the factory and rescued the other workers, including his wife. This month, the couple were deported to Myanmar after being held almost a year in a Thai government shelter.

Those Thai reforms — on paper — include paying whistleblowers like Win and providing victims compensation, education, employment and other assistance. But Win said he and his wife weren't even given food sometimes.

Authorities said that although the couple were victims of modern-day slavery, they had illegally entered Thailand to begin with. Nattamon Punbhochar at the Thai foreign ministry said the couple never requested compensation and were deported in accordance with a memorandum of understanding Thailand has with Myanmar.

Col. Prasert Siriphanapitat, Samut Sakhon deputy police commander, said five people including a shed owner have been charged in Win's case. All are out on bail.

The AP recently visited a handful of Samut Sakhon shrimp sheds buzzing with workers hand-peeling shrimp on residential streets or behind walls.

Documents at Boonchai show it processes shrimp for May Ao Food Co., one of Thailand's leading exporters to the U.S.

Though Boonchai's operations passed a government inspection, the industry had vowed to eliminate middlemen. May Ao's shrimp carries global industry certification that says "peeling and heading of shrimp must occur in facilities owned by and completely controlled by" the processing plants. May Ao is also a member of the Thai Frozen Foods Association, which promised "to eradicate third-party pre-processing."

May Ao and TFFA officials initially said all shrimp peeling is in-house before conceding that it wasn't. TFFA President Poj Aramwattananont said May Ao's factory is too small to handle all the labor, and that there's nothing illegal about pre-processing in independent warehouses.

"We are not 100 percent clean. You will always find some problems, but those are rare," he said.

"I have more rights. I like it," said Thet Paing Oo, 23, a migrant from Myanmar.

He said he spent six years working 15-hour shifts at shrimp sheds without a day off. Now his salary has increased and he gets one day off a week.

Yu Wa, 35, also from Myanmar, teared up at memories of her previous shed, where she was locked inside and paid by the kilogram, not per day.

"I am treated well and the boss is good," she said. "It's much better."