Here is a timeline of the emissions scandal that has dogged automaker Volkswagen for the past year. ___ 2015 Sept. 18: The U.S. Environmental Protection Agency says Volkswagen installed software on more than 475,000 cars that enabled them to cheat on emissions tests. The software reduced... 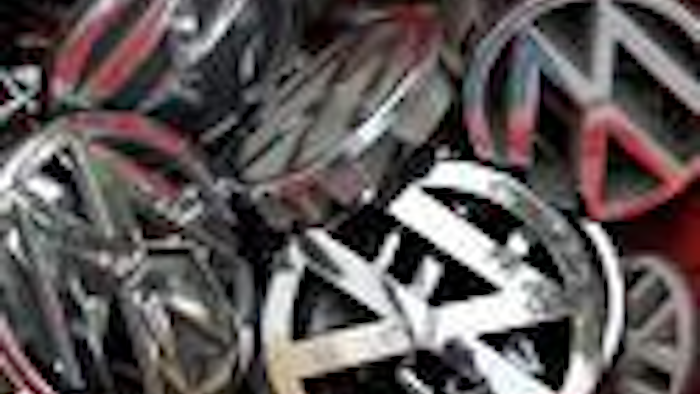 Here is a timeline of the emissions scandal that has dogged automaker Volkswagen for the past year.

Sept. 18: The U.S. Environmental Protection Agency says Volkswagen installed software on more than 475,000 cars that enabled them to cheat on emissions tests. The software reduced nitrogen oxide emissions when the cars were placed on a test machine but allowed higher emissions and improved engine performance during normal driving. The EPA was alerted to the discrepancy in a report from the International Council on Clean Transportation.

Sept. 22: Volkswagen says about 11 million diesel vehicles worldwide were fitted with the deceptive software. It sets aside 6.5 billion euros ($7.3 billion) to deal with the costs of the scandal, including expected recalls.

Sept. 23: Volkswagen CEO Martin Winterkorn resigns. He takes responsibility for "irregularities" found by U.S. inspectors, but insists he personally did nothing wrong.

Sept. 25: Volkswagen appoints Matthias Mueller, the head of the group's Porsche unit, as the new CEO.

Oct. 1: Volkswagen names Hans Dieter Poetsch, its chief financial officer, as the new board chairman. The move had been planned since before the crisis but raises concerns about the ability of longtime insiders to get to the bottom of the matter.

Oct. 8: Volkswagen's top U.S. executive, Michael Horn, testifies before Congress. He apologizes for the scandal and blames it on "a couple of software engineers."

Oct. 15: Germany orders recall of all Volkswagen cars with the test-cheating software. By European Union rules, Germany's move means that all 8 million such cars are obliged to be recalled across the 28-country bloc.

Oct. 28: Volkswagen reports a loss of $1.83 billion in the third quarter after booking a charge of $7.5 billion to cover the costs of recalls connected to the scandal.

Nov. 2: The EPA and the California Air Resources Board say Volkswagen also installed the cheating software on thousands of Audi, Porsche and VW cars with 3.0-liter, six-cylinder diesel engines. The previous revelations of cheating involved four-cylinder diesels in smaller cars. Volkswagen initially rejects the new allegation, then admits the 3.0-liter engines have had illegal "defeat devices" since 2009.

Jan. 4: The U.S. Justice Department sues Volkswagen over emissions-cheating software found in nearly 600,000 vehicles sold in the U.S. with 2.0-liter and 3.0-liter diesel engines, potentially exposing the company to billions in fines for violations of the Clean Air Act.

April 21: U.S. District Court Judge Charles Breyer says U.S. Volkswagen owners with 2.0-liter diesels will be able to sell them back to the company or have them fixed. Says further details will be released in June.

April 22: Volkswagen takes an $18.2 billion charge to cover the cost of the diesel scandal and delays the results of its internal probe until the fourth quarter. It reports a full-year loss of $1.53 billion.

June 1: U.S. sales of the Volkswagen brand are down 13 percent in the first five months of the year. Global sales of Volkswagen cars are down 2 percent.

June 28: Volkswagen agrees to settlements that could total as much as $15.3 billion to resolve environmental and consumer claims arising from the scandal.

July 28: Volkswagen says its second quarter net earnings more than halved to 1.2 billion euros. Its global sales, however, held up. They rose 5.1 percent in June as European and Chinese demand offset a 11.7 percent slump in the U.S.

Aug. 25: Volkswagen reaches tentative deal with 650 U.S. dealers to compensate them for losses. The value of the settlement was not disclosed.

Sept. 9: Volkswagen engineer James Robert Liang pleads guilty to one count of conspiracy defraud the government in the U.S. Justice Department's ongoing investigation. He says he will cooperate in the probe.

Sept. 21: German court says it has received a total of 1,400 investor lawsuits against Volkswagen seeking damages worth 8.2 billion euros ($9.2 billion).