Nigeria Sues Over $12B in 'Illegal' Oil Exports

Nigeria is suing several leading oil companies for $12.7 billion of crude oil that allegedly was exported illegally to the United States between 2011 and 2014. 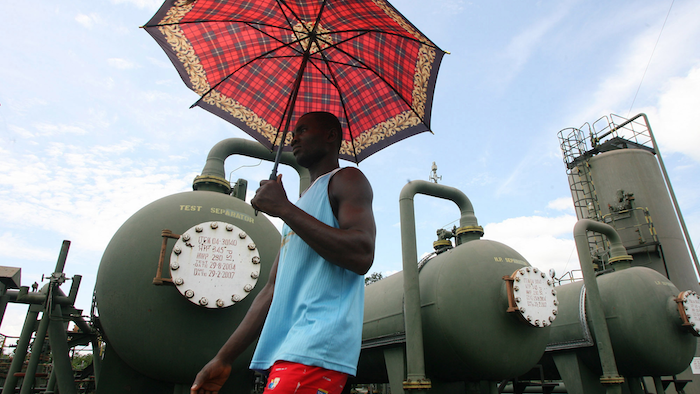 AGOS, Nigeria (AP) — Nigeria is suing several leading oil companies for $12.7 billion of crude oil that allegedly was exported illegally to the United States between 2011 and 2014, officials said Tuesday.

Chevron would not comment since the issue "is the subject of ongoing litigation," said a spokeswoman at the company's Houston headquarters, Isabel Ordonez. Other companies did not immediately respond to requests for comment.

The cases could provoke new anger against oil companies already accused of polluting farmland and fishing grounds. Local frustration has contributed to an armed movement in the oil-producing Niger Delta, where militants are demanding the multinationals pull out.

Officials familiar with the cases said Nigeria's government alleges that the companies did not declare more than 57 million barrels of crude oil shipments. That was deduced from audits of declared exports and what was unloaded in the United States.

Some shiploads registered less when they left Nigeria and more on reaching the United States, while some entire shiploads were undeclared in Nigeria, said the officials, who spoke on condition of anonymity because the cases still are in court.

The United States was the biggest importer of Nigerian oil until it began exploiting its own shale oil reserves, though Nigerian exports to the U.S. have increased six-fold this year, according to OPEC.

Michael Kanko confirmed that his U.S.-based ImportGenius database was used by attorneys to confirm declarations made to U.S. customs by shippers and importers.

Law professor Fabian Ajogwu is representing the Nigerian government in the case against Chevron, which comes up first on Sept. 30.