NEW YORK (AP) — It's getting rarer for phone launches to generate excitement these days — especially in the Android world, where all models use the same underlying Google software. Every year, phones get routine refreshes such as faster processors, better cameras and longer battery life. But... 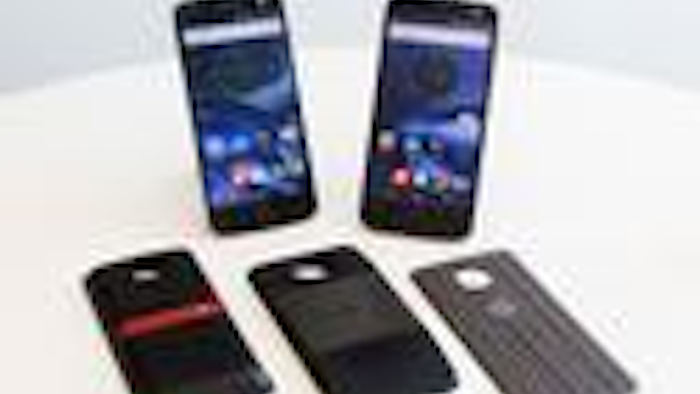 NEW YORK (AP) — It's getting rarer for phone launches to generate excitement these days — especially in the Android world, where all models use the same underlying Google software. Every year, phones get routine refreshes such as faster processors, better cameras and longer battery life.

But Android phone makers haven't given up trying to stand out. Samsung, for instance, hopes to encourage upgrades by giving its new Galaxy Note 7 phone an eye scanner for identification and related security features. Other manufacturers are looking beyond the phone entirely, pinning their hopes on innovative accessories. Motorola offers mix-and-match modules that let you upgrade your phone on the fly, while Alcatel is focused on adding virtual-reality features, including a headset.

Fingerprint scanners are now standard in high-end phones, following their big debut in the 2013 iPhone 5S. In the Note 7, Samsung takes the notion of such "biometric" security a step further, adding an iris scanner that detects patterns in your eyes to confirm your identity.

The feature is easy to set up, and the iris detection works well — as long as you're not in direct sunlight or wearing glasses (much less sunglasses). Samsung even warns that contact lenses might mess things up, although the scanner worked fine when I wore them. To unlock the phone, you need to turn on the screen and swipe; then you just stare at the screen. The fingerprint scanner works even with the screen off and glasses on, making it the far better choice unless your fingers are wet.

Many Android phones offer a face-detection feature for unlocking phones, but that's all it does. With the Note 7, the iris or fingerprint can also unlock a secure folder where you can stash sensitive photos, documents and email accounts you might want to keep away from friends who borrow your phone to look at baby pictures.

It's a good concept, although in practice it can feel like you're using two separate phones. When browsing photos in the "secure" gallery, all your other photos are invisible. You need to go back out to the "unsecure" gallery to view those. And there's no way to move text messaging to the Secure Folder.

Beyond that, the Note 7 has a more resilient screen, more storage and more ways to use the stylus — for instance, you can translate a phrase just by holding the pen over a word. Samsung also brings water resistance and its excellent Galaxy S7 camera to the jumbo Note 7, while offering easier access to camera settings using swipes.

Nothing is radically new, but the improvements are great if you're already looking to upgrade. The Note 7 comes out Friday and will cost $850 to $880 in the U.S., depending on the carrier. It's about $100 more than what last year's Note cost at launch, but all models now have a screen that curves over the sides of the phone, something previously reserved for a more expensive "Edge" version.

BUILD YOUR OWN PHONE

Motorola is the latest manufacturer to embrace a new concept called modular design . With it, customers can customize their phones on-the-fly by swapping out components to get, say, a bigger battery or more powerful speakers. Another replaceable module can turn the phone into a wall projector for presentations. This takes the idea of personalization way beyond choosing the phone's color or storage.

LG introduced an earlier modular design with its G5 phone in April, although that phone forces you to shut it down every time you replace a module. Motorola lets you replace modules without missing a Snapchat. Modules attach to the phone using powerful magnets, yet they snap on and off easily, like Lego blocks.

Of course, many phone cases and other accessories offer similar functionality, but they aren't as fun as what the company calls Moto Mods.

For now, you can only use these modules with the Moto Z ($625) and Moto Z Force ($720) phones, which are currently available only through Verizon in the U.S. under the Droid brand. And these modules will cost you: a spare battery is $60 to $90, the speaker is $80 and the projector is a whopping $300. You could shell out more than $1,200 if you also opt for a designer phone back made of fabric, wood or leather.

The concept is pretty radical as Android innovations go, but there's a chicken-and-egg problem. Third-party developers need to know there are customers out there before they'll commit the time and money to building imaginative modules. A module with a larger camera lens for better zooming, for instance, would be awesome. But there are no crowds demanding that feature — at least not yet.

LG faces the same problem with its G5 modules. For now, it lets you swap batteries and attach a camera grip with physical buttons to take shots and control video recording.

Alcatel's approach to innovation is to not sell you a phone at all. Instead, it wants to offer you a virtual-reality setup for $400. You get a mid-range Android phone, the Idol 4S, along with a VR headset, JBL headphones and an Incipio protective case for the phone. Alcatel doesn't sell the 4S separately, but based on the $280 price of last year's Idol 3, you're paying roughly $100 for the accessories.

Alcatel's headset is a step up from Google Cardboard, a $15 contraption that's not meant to be comfortable — it's made of cardboard, after all. But it lacks the head-tracking capabilities of Samsung's $100 Gear VR, which on Friday is getting a wider field of view and a black interior for more-immersive viewing.

Unfortunately, Alcatel's innovation might feel obsolete in just a few months, when Google releases its Daydream system for headsets and phones. Daydream is designed for higher-end phones than the Idol 4S, so Alcatel's VR system won't be compatible.