CHICAGO (AP) — Bruce Rauner takes pride in not being like any of Illinois' previous governors, either on matters of style or substance. A multimillionaire in his first public office, the former private equity investor drops by watering holes in the state capital of Springfield to have a lowbrow... 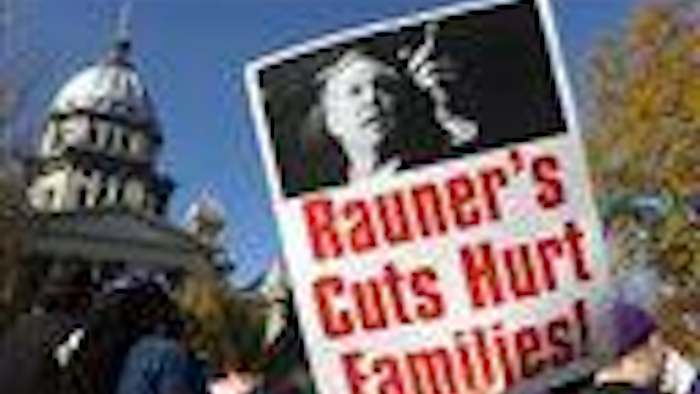 CHICAGO (AP) — Bruce Rauner takes pride in not being like any of Illinois' previous governors, either on matters of style or substance.

A multimillionaire in his first public office, the former private equity investor drops by watering holes in the state capital of Springfield to have a lowbrow Stag beer, despite having belonged to a six-figure wine club.

He eschews backroom steak dinners and doesn't drink caffeine, instead subsisting on so many salads and vegetable juices that some in the press corps have speculated about the carrot-orange tint to his skin. It's not unusual for him to be the worst-dressed man in a room, sporting plaid shirts that look like they came from the sale rack at a discount store.

Mostly, though, it's his politics. Unlike even his Republican predecessors, who often cut deals with Democrats and their labor union allies in the Legislature, Rauner boasts about being the first to stand up to them, even as it's led to a record-breaking stalemate. Seven months after Illinois' last budget expired, the state still doesn't have a new one, and money is running out for many programs.

Now, after the most unusual first year of any new governor in the country, Rauner is starting 2016 with signs that the strangest may be yet to come. As he prepares for his second State of the State speech this week, he is talking tougher than ever about his adversaries, particularly the "union bosses" he has already called "corrupt," and is raising the specter of growing chaos, including public employee strikes, layoffs and shutdowns in state services.

Rauner is one of a handful of GOP governors elected in recent years to lead mostly Democratic states, such as Wisconsin and Michigan, which has produced some big collisions. The situation echoes what's been seen lately in Washington and in parts of the national Republican party — using showdowns and shutdowns rather than compromises to achieve your goals.

But the struggle in Illinois is especially bitter and prolonged because the Democrats there are so strong, holding supermajorities in the Legislature.

Rauner, who spent more than $27 million from his own bank account to unseat the Democratic incumbent, says he's on a mission to reform a state that wastes public money, has $9 billion in unpaid bills and wants to solve problems with tax increases. He has promised to "deliver value for taxpayers" in part by ending the "self-dealing" by longtime politicians that has led to Illinois' worst-in-the-nation credit rating.

"The key to success in everything in life is persistence, and I am an extraordinarily persistent person," Rauner said Monday. "We need fundamental, dramatic change in Illinois ... We're not going to back down on it."

Rauner is demanding changes he says will attract more jobs to the state, such as weakened unions and lower workers' compensation costs, before he will approve a tax hike that Democrats want to help close a roughly $5 billion budget gap.

Democrats, including Rauner's top rival House Speaker Michael Madigan, have accused him of holding the budget hostage until he gets some of his priorities. They say his changes will lead to lower wages and hurt the middle class. And they believe he will eventually have to back down.

Rauner, Madigan said last week, is "more interested in driving down the wages and standard of living of middle-class families than working together to solve our state's problems."

Rauner's supporters, however, see him as a kind of hero. During stops in GOP-friendly southern Illinois late last year people lined up to take selfies with the long-armed governor, shake his hand and say thank you.

"I know it's got to be a fight but stay after it," local car dealer Keith Summers told Rauner during an event at a Mattoon manufacturing plant.

Both sides see the worsening fallout as perfect ammunition for campaign ads heading into the 2016 elections, when Rauner hopes to chip away at Democrats' statehouse majorities. That's promoted chatter that the siege could last beyond November.

Already, a growing number of social service agencies are closing because of the freeze in state funds. Lutheran Social Services just laid off half its staff and terminated programs such as in-home care for seniors and substance abuse counseling serving about 5,000 people. Several thousand university students are no longer receiving state tuition grants.

With contract deadlines approaching for the 40,000-member AFSCME, the state's largest public-worker union, and for Chicago public teachers, Rauner has said he doesn't want strikes, but if they happen, "We'll win."

Last week, Rauner pushed for a state takeover of the Chicago Public Schools, said Chicago itself should consider filing for bankruptcy and called Mayor Rahm Emanuel a failure.

Calling a news conference to announce a rare bipartisan deal on Illinois' worst-in-the-nation pension crisis, Rauner couldn't stop himself from threatening to strip unions of their power to bargain over wages — remarks that almost derailed the agreement. And he promised that legislators who vote to support the "Chicago machine" will be "called out."

Asked what that meant Rauner responded: "You watch."