Securities filings show Meridian has raised only about 6% of the project's costs to date. 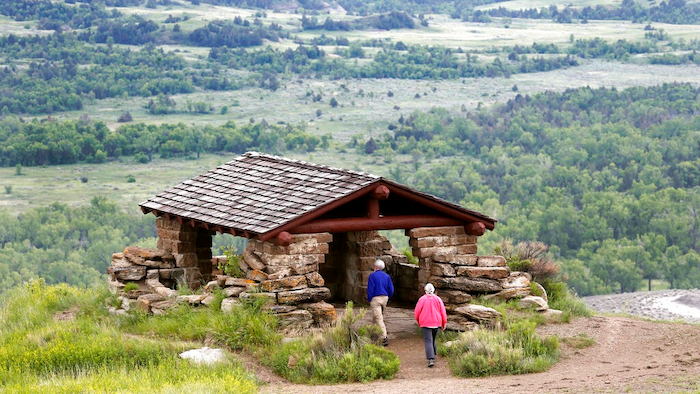 In this June 11, 2014, file photo, visitors hike to a stone lookout over the Little Missouri River inside the Theodore Roosevelt National Park, located in the Badlands of North Dakota. Anemic funding, alleged unpaid work and legal fights are hobbling developers of a proposed $800 million oil refinery near the park in western North Dakota. But the project manager for Meridian Energy Group's Davis Refinery, which has drawn criticism from environmental groups and others who worry it would add to pollution near the national park, insists it will be built.
AP Photo/Charles Rex Arbogast, File

But the project manager for Meridian Energy Group’s Davis Refinery — which has drawn criticism from environmental groups and others who worry it would add to pollution near the national park — insists it will be built.

“The project is still on track and moving in the right direction,” Dan Hedrington said. “Is the project still being built? Yes.”

Meridian wants to build the refinery just 3 miles (5 kilometers) from the park, which is the state's top tourist attraction with more than 700,000 visitors annually. Environmental groups argue pollution from the factory will spoil scenery and air quality at the 30,000-acre (12,000-hectare) park.

The company has said the project first proposed in 2016 will be the "cleanest refinery on the planet" and a model for environmentally friendly technology. But environmental groups are leery and have two disputes pending before North Dakota’s Supreme Court.

The National Parks Conservation Association in March filed an appeal to the Supreme Court, arguing that an air quality permit issued by the state Health Department and upheld by a state judge violates the federal Clean Air Act. The Environmental Law and Policy Center and the Dakota Resource Council also appealed last year to the state's high court, arguing developers aren't being honest about the refinery's size.

Meridian began site work in 2018, aiming to have the refinery operating by mid-2021. Meridian CEO William Prentice told The Associated Press in August that the company delayed its startup until 2022 due to funding and legal setbacks.

Meridian’s original state permit allowing it to begin work at the site expired last month but was extended by regulators for another 18 months. Prentice, in a letter to the state Department of Environmental Quality, blamed “litigation” as “the direct cause of delays to the financing and construction” of the project.

The state’s initial approval wasn't based on the site but on a determination after an 18-month review that the refinery wouldn't be a major source of pollution and wouldn't negatively impact the park.

Prentice's letter said the company is “fully committed” to building the refinery “assuming ... litigation is successfully concluded in the near future.”

Securities filings show Meridian has raised only about 6% of the project's costs to date.

St. Paul, Minnesota-based SEH Design/Build in November filed a $2.18 million lien, alleging it has not been paid for site preparation work. Records show the 157-acre (63.5-hectare) parcel where the work was done is owned by Greg Kessel, a local landowner who was appointed to the company’s board.

Hedrington, the project manager, said “payments are being made” on the lien, but would not disclose the amount.