Activists are staging rallies Friday outside Siemens offices over its involvement in a coal mine project in Australia. 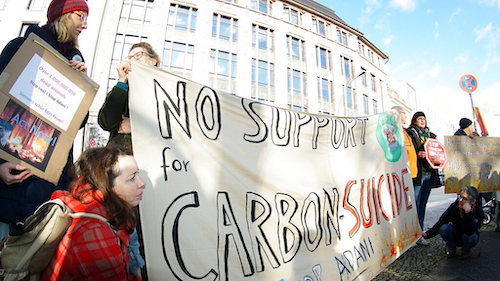 Activist of 'Extinction Rebellion' and 'Parents for Future Berlin' attend a protest rally against the climate policy of Australia's government in front of Australia's embassy in Berlin, Germany, Friday, Jan. 10, 2020.
AP Photo/Michael Sohn

BERLIN (AP) — Climate activists are staging rallies Friday outside the offices of German engineering firm Siemens over its involvement in a coal mine project in Australia.

The group Fridays for Future, which has held weekly protests demanding action against climate change for over a year, wants Siemens to quit the Adani mine project because emissions from coal-fired power plants contribute to global warming.

Siemens chief executive Joe Kaeser has offered to meet with representatives of the group and said the company takes the activists' concerns seriously.

Kaeser also said on Twitter last month that he would “diligently look into the matter.”

Siemens has put in an offer to supply signaling systems for the mine.

Australia, which is currently battling massive wildfires following months of drought and above-average temperatures, is one of the world's biggest coal exporters.