Allegations of improper water disposal and lax regulatory oversight have plagued California's oil industry in recent weeks. But unlike New York, the Golden State appears unlikely to ban the practice of drilling for oil using hydraulic fracturing, or fracking. 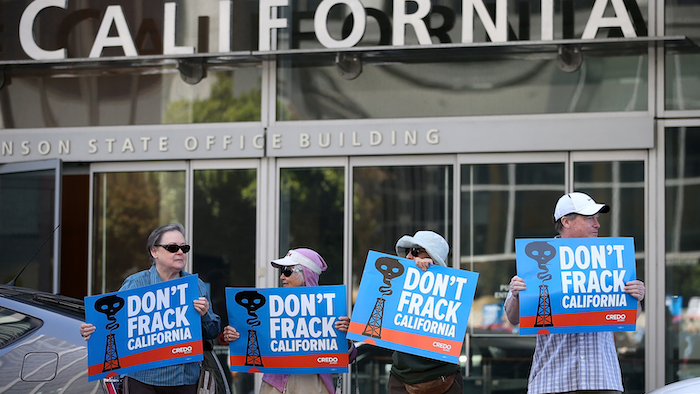 But unlike New York, the Golden State appears unlikely to ban the practice of drilling for oil using hydraulic fracturing, or fracking.

State officials shut down a dozen wells earlier this month, and regulators told a state Senate panel that although tests of nearby water showed no contamination, they would change the culture and management style of the state Division of Oil, Gas and Geothermal Resources.

"It’s very clear that there has been a terrible imbalance," said Sen. Hannah-Beth Jackson, a Democrat from Santa Barbara. “There is a culture here that has been so much moved by the oil and gas industry."

The controversy comes amid ongoing tension between environmentalists and the administration of Democratic Gov. Jerry Brown over fracking, which accounts for about one-fifth of California’s oil production. Protests--including a rally that drew thousands in Brown's hometown of Oakland last month--called for Brown to ban fracking outright.

Brown, however, hasn't given any indication he'll do so despite a long record of favoring environmental causes and his administration's efforts to dramatically increase renewable energy use.

"The reason why I have some sympathy for oil drilling in California is because 98 percent of the people are using oil that is imported, and until we get them in electric cars or walking or riding their bikes, we need oil," Brown said last year. "But we’ve got to get off it."

In the wake of the improper permitting, the U.S. Environmental Protection Agency originally threatened to revoke California's authority to enforce federal water law. But this week, the EPA accepted the state's proposal to rectify the problems.

In addition to the immediate closing of the Central Valley wells, state officials face deadlines of May 15 to review injection wells operating in aquifers without oil, July 15 to file for potential exemptions with the EPA, and Oct. 15 to stop injections into protected aquifers altogether.