Republican Donald Trump has won the U.S. presidential election in a surprise upset after polls had predicted a comfortable lead for his Democratic opponent, Hillary Clinton. Here is a snapshot of some of Trump's energy-related statements.

NEW YORK — Republican Donald Trump has won the U.S. presidential election in a surprise upset after polls had predicted a comfortable lead for his Democratic opponent, Hillary Clinton.

While Trump has given few concrete details about his energy plans, his statements during the campaign indicate he would likely adopt policies that attempt to expand fossil fuel production, ease regulations on industry and roll back President Barack Obama's clean air policies.

Here is a snapshot of some of Trump's energy-related statements:

Trump has said he supports all forms of energy and wants the market to decide which ones succeed. He has promised to open all federal lands and waters to fossil fuel production, in contrast to Clinton, who had called for new, stricter limits on oil and gas production on public lands and indicated she wanted U.S. offshore production confined to only the Gulf of Mexico.

Analysts say it is impossible to determine just how much of an impact a Trump administration may have on domestic supply because of a number of shifting factors, particularly prices.

But Trump, widely seen as a far bigger supporter of the oil and natural gas industry, will likely rebuff any environmentalist attempts to curb domestic fossil fuel production and will likely give U.S. producers access to far more on and offshore plays than Clinton would have.

"I think it's like the production of anything, if you have access to more of it, you're going to have more," North Dakota Representative Kevin Cramer, a Republican and top Trump energy adviser, told S&P Global Platts. "In fact, whether it correlates to more overall production or not, it certainly provides a diversity of opportunities for producers so that, with a low market price, they can pick the most productive places to drill with the greatest efficiencies."

Trump has said he will pursue a policy path to open up more U.S. lands and waters to drilling and, in turn, boost consumption of even cheaper domestic oil and other fossil fuels. Analysts say his broad plans to boost U.S. production and eliminate many of President Obama's regulatory efforts to combat climate change may result in less demand reduction than if Clinton were elected.

Trump would likely quash efforts to institute new greenhouse gas performance standards for petroleum refineries and may push to weaken future fuel economy standards for light-duty vehicles, but those possible moves would not necessarily correspond with an increase in demand, particularly since efficiency gains already in place in the U.S. vehicle fleet are already forecast to cut gasoline demand as much as 500,000 barrels per day (b/d) by 2020.

At the same time, oil demand is driven by a country's gross domestic product and will likely be defined by economic factors largely outside the new president's control, said Stewart Glickman, head of energy equity research for S&P Global Market Intelligence. In spite of any policy changes, if gross domestic product (GDP) goes up, people will likely drive more and demand will increase, Glickman added.

Trump has promised to either dismantle or overhaul the Environmental Protection Agency (EPA) and roll back Obama administration regulations to curb coal industry pollution. Cramer said Trump believes EPA needs to return to its core mission of protecting clean water and clean air, and that Congress has granted it too much leeway in interpreting legislation.

Trump is expected to try to scrap the Clean Power Plan. He questions the widely held scientific consensus that human activity is causing climate change.

Trump is expected to abandon, or at least weaken, efforts by EPA and the Department of the Interior to regulate methane emissions from oil and gas operations and also could weaken future car and truck fuel-economy standards. 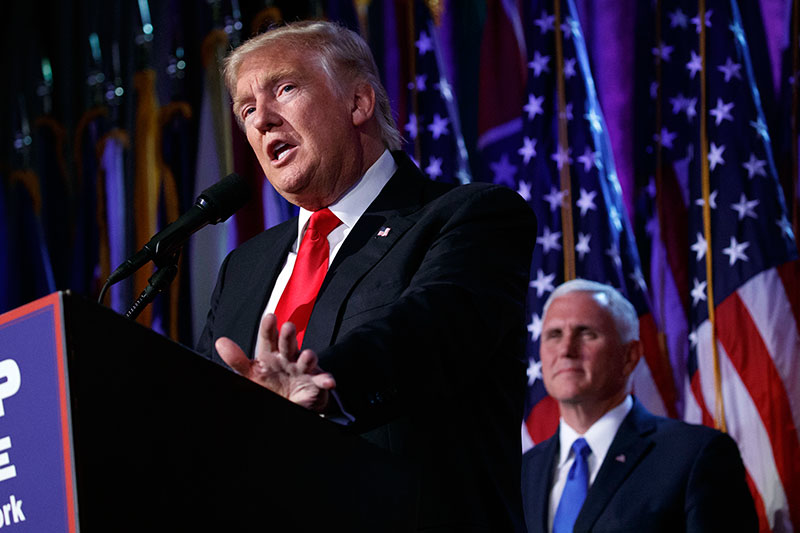 Trump has not addressed the Dakota Access Pipeline controversy, but he holds personal investments in project sponsors Energy Transfer Partners and Phillips 66. He has said that, if elected, he would urge TransCanada to renew its Keystone XL permit application, which the Obama administration rejected in late 2015 after years of debate.

Aside from those high-profile pipeline controversies, it's unlikely the next president will have a big impact on future midstream projects, since authority over most oil and gas pipelines falls outside the administrative branch. But liquefied natural gas (LNG) export facilities and cross-border oil and gas pipelines must receive a presidential permit, and Trump's appointees will be weighing those applications.

Trump has said he would spend "at least double" what Clinton planned on infrastructure, funding it with new debt to take advantage of still-low interest rates.

Trump's possible efforts to end incentives for alternative energy development would boost near-term demand for fossil fuels. For example, a potential cut in the Investment Tax Credit to 10 percent from the current 30 percent would slash solar installation demand by 60 percent, according to S&P Global Market Intelligence.

Trump has offered broad public support to the Renewable Fuel Standard (RFS), but in September he unveiled an economic policy package that included a statement that the market underpinning the RFS, the EPA's Renewable Identification Number program, "penalizes" refiners for not meeting "impossible" requirements. After these statements were criticized, they were removed from Trump's campaign website and staffers claimed they were posted in error.

Trump will have the power to nominate justices to the Supreme Court, subject to Senate approval, potentially shaping the court's ideological balance for decades. Filling vacancies on the U.S. Court of Appeals for the District of Columbia Circuit also could influence decisions about environmental regulations.

He will fill key positions at EPA, Interior, the Department of Energy and other agencies that make decisions affecting energy and make appointments to the Federal Energy Regulatory Commission.

Trump said he would create an "American Desk" in the Department of Commerce to "protect the economic interests of the American worker and the national interests of the United States. It's going to be America first." In 2015, 70 percent of the 64 trade cases Commerce launched involved steel products.