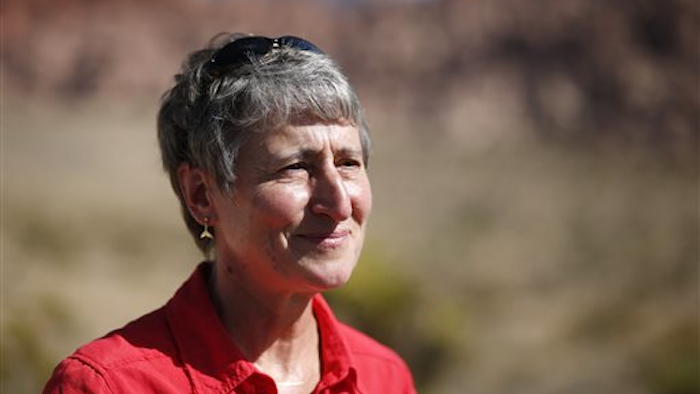 The Obama administration has proposed a fee on oil and gas drillers that would allow the land management agency to hire more than 60 inspectors, but the proposal has not gained traction in Congress.

The land bureau faces a "major backlog of inspections" as it tries to keep pace with a drilling boom that has sharply increased U.S. oil and gas production in recent years, Jewell said.

"We do not have the resources necessary to do the job," Jewell said at a breakfast sponsored by the Christian Science Monitor. The inspectors are needed to protect the environment and prevent potential health hazards caused by leaking wells, she said.

The Associated Press reported last year that 40 percent of new wells on federal and Indian land with a higher pollution risk were not inspected from 2009 to 2012.

Asked if the situation had improved since then, Jewell said no, adding: "We are under-resourced."

While the proposed fee has stalled in Congress, Jewell said it remains the agency's best option to whittle its inspections backlog.

"It makes no sense not to match supply and demand," she said, adding that if the drilling boom slows or fizzles, the need to charge a fee would go away.

Jewell also lamented a practice in which energy companies "flare" or burn off vast supplies of natural gas as they drill for oil. A report by the Government Accountability Office said 40 percent of the gas being burned or vented could be captured economically and sold.

The bureau has not completed new guidelines on flaring, but Jewell said a proposed rule could be released for public comment later this year. But even without new federal rules, Jewell urged energy companies to rethink their practice of flaring natural gas in the pursuit of higher-priced oil.

"It's crazy to vent natural gas into the atmosphere when natural gas is a fuel that can produce electricity at a much lower carbon footprint than other (energy) sources like coal," Jewell said.

On a related topic, Jewell said she is confident that new rules for oil and gas drilling on federal lands nationwide will be upheld, despite a court challenge by four states and two industry groups. The Bureau of Land Management has delayed implementing the rules until a federal judge in Wyoming decides on the case.

Jewell said the rules "are based on common sense and science," although she acknowledged some changes may be required.

The rules, announced in March, would require oil and gas developers to report the chemicals they pump underground during hydraulic fracturing. The drilling procedure, also known as fracking, involves pumping huge volumes of water mixed with fine sand and chemicals underground to crack open deposits and boost flows of oil and gas.

The petroleum industry argues the rules would be costly to oil and gas developers. Officials in Wyoming, Colorado, Utah and North Dakota claim the rules would damage their economies by causing energy companies to move off federal lands to regions where oil and gas reserves can be exploited from private land, where the federal government has less oversight. Two industry groups, the Western Energy Alliance and Independent Petroleum Association of America, joined the lawsuit.

Six environmental groups have sided with the Obama administration, saying the government needs strong rules for oil and gas drilling to protect water, wildlife and other resources on federal land.

Jewell also said she is optimistic the administration can avoid a proposal to list the greater sage grouse as endangered, even while working to protect the bird's habitat and stave off further declines in grouse populations.

Jewell said she has "stayed completely at arm's length" as the Fish and Wildlife Service decides what to do. The agency is part of the Interior Department.

The bird's fate has become a potential political liability for Democrats heading into the 2016 election. Federal protections could prompt limits on energy drilling, grazing and other activities across the grouse's range in 11 Western states.

Republicans have seized on the issue as evidence of wildlife protection laws run amok and say it underscores an urgent need to scale back the federal Endangered Species Act.

But Jewell said the act is working as intended, citing efforts by a variety of Western states and interest groups to collaborate on measures to protect the sage grouse while allowing energy development and grazing.