Palisades nuclear power plant in southwestern Michigan shut down Wednesday due to an equipment failure and will get an early start on a planned $58 million refueling, maintenance and inspection project that had been scheduled to start this weekend, officials said. 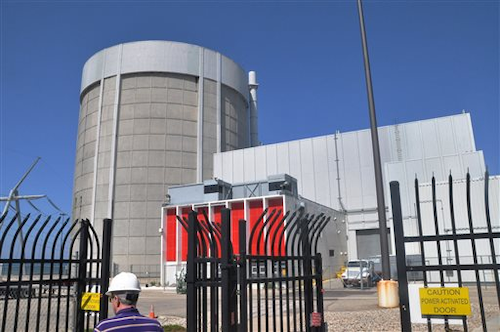 COVERT TOWNSHIP, Mich. (AP) — Palisades nuclear power plant in southwestern Michigan shut down Wednesday due to an equipment failure and will get an early start on a planned $58 million refueling, maintenance and inspection project that had been scheduled to start this weekend, officials said.

New Orleans-based Entergy, which owns the plant, said it shut down automatically at 1:17 a.m. due to a failure in the turbine generator system — a non-nuclear, non-safety related system. Equipment functioned normally after the shutdown at the plant in Van Buren County's Covert Township on the shore of Lake Michigan, Entergy said.

"We've had an exceptional operational run since returning to service from our last refueling outage in March of 2014," Tony Vitale, Palisades site vice president, said in a statement.

The plant has been under increased scrutiny by regulators. Earlier this year, Palisades said the facility would work to increase transparency and public outreach after its safety rating was lowered in a federal review. A violation was found related to how some workers' radiation doses were monitored and calculated.

During the refueling and maintenance outage, which originally was scheduled to start Sept. 20, about 1,000 temporary workers will assist the plant's 600 full-time employees. They'll perform upgrades, inspections and replacements that can only be completed while the plant is shut down.

Safety upgrades ordered after the Japanese nuclear accident at Fukushima in 2011 also will be made, a separate investment totaling $50 million. The work, which Rose said began last November, is designed to improve safety for possible external events, such as tornados, flooding and earthquakes.

Separately, DTE Energy Co. said the reactor at the Fermi 2 nuclear power plant in southeastern Michigan has been shut down after a problem with a system used to cool auxiliary equipment, the Monroe News reported. The manual shutdown took place late Sunday.

The plant is located along Lake Erie in Monroe County's Frenchtown Township. Detroit-based DTE said crews will evaluate plant equipment and look to see whether any repairs are necessary.