Linking Fukushima & Hiroshima Upsetting To Many

"No more Hiroshimas!" ''No more Fukushimas!" Those slogans are chanted together at rallies by Japanese who want both an end to nuclear power in Japan and an end to nuclear weapons around the world. But many in this city are distressed by efforts to connect Hiroshima's history to the tsunami-triggered meltdowns at the Fukushima Dai-ichi nuclear plant. 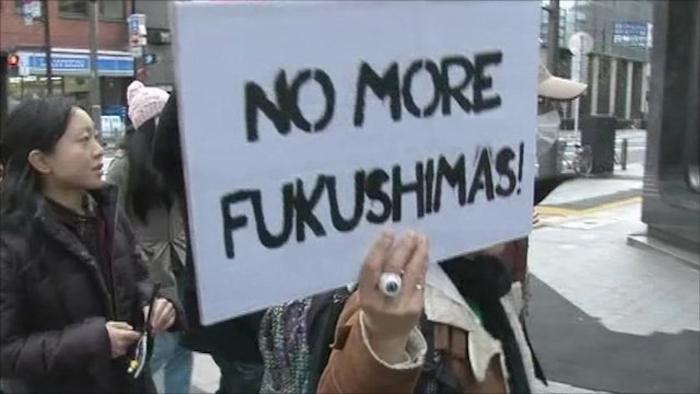 But many in this city are distressed by efforts to connect Hiroshima's history to the tsunami-triggered meltdowns at the Fukushima Dai-ichi nuclear plant. Like the bomb the United States dropped on Hiroshima August 6, 1945, the March 2011 Fukushima disaster unleashed radiation that will affect the region's health for decades. Hiroshima medical experts, the world's most renowned on radiation-related sicknesses, are being called on for advice on how the meltdowns may have harmed people who lived near the power plant along the northeastern coast of Japan.

Some in the historical movement against nuclear non-proliferation have joined the protests that have popped up after Fukushima, calling for an end to nuclear power. Calls out of Hiroshima to do away with nuclear weapons carry great moral weight in Japan, and activists are asking the city to join forces and sign their petitions demanding the government ditch nuclear power. To opponents of this idea, the differences between Hiroshima and Fukushima dwarf the similarities. Only one of the two catastrophes was an act of war that unleashed death, fire and horror on a scale the world had never seen.

"Our position, and this is a position we can never compromise, is that nuclear weapons are an absolute evil," Hiroshima Mayor Kazumi Matsui said in an interview at city hall, his voice trembling. "I oppose connecting the two simply because they both involve radiation." The widespread sentiment in this southwestern city, he said, is that Hiroshima has endured something more terrible than the aftermath of a nuclear accident, and people resent getting lumped together. Matsui lost relatives in the attack, and his parents' home was destroyed.

The bombing killed some 140,000 people — some instantly, others within months. Three days later, the U.S. dropped a second atomic bomb on Nagasaki, killing an estimated 70,000 people shortly before the end of World War II. Those categorized by the government as sick from the Hiroshima bombing's radiation still number more than 200,000. No one is known to have died from the Fukushima radiation, but the plant's three nuclear meltdowns will take decades to clean up and it is impossible to know what the health toll will ultimately be. Only recently has the government acknowledged that much more radioactive water is leaking into the sea than it had previously believed.

The Japanese government has detected 44 confirmed and suspected cases of thyroid cancer among the 217,000 youngsters, 18 and under, checked in Fukushima. Thyroid cancer among children is generally rare, estimated at only one in a million. The link to radiation is still inconclusive, and extensive testing of Fukushima children could account for the higher numbers. But according to the World Health Organization, thyroid cancer struck thousands of people after the only nuclear-plant disaster worse than Fukushima, the 1986 Chernobyl meltdown in what is now Ukraine.

Robert Jacobs, professor at the Hiroshima Peace Institute, sees similarities between Hiroshima and Fukushima, calling the latter a "slow-motion nuclear war." He said the cumulative radiation dosage from Fukushima could be quite significant because the leaks are likely to continue for decades. Some medical experts are worried about sickness that may emerge in coming years, although the amount of deadly energy released at the moment of the atomic bombing was far greater than what spewed from Fukushima.Hiromichi Ugaya, a former journalist at the Asahi newspaper who has been documenting Fukushima, said it is "an irony of history" that Japan failed to prevent the world's second-worst nuclear plant disaster, even though it is the only country on Earth to have been attacked with nuclear weapons.

"Japan was the one country that should have been careful with nuclear technology," said Ugaya, who recently wrote a book called "Road From Hiroshima to Fukushima." He considers nuclear weapons and nuclear power to share a historical backdrop. "The atomic bomb and nuclear power are like twin siblings if you trace their history," he said. Some in Hiroshima are adamant about denying any ties. One reason is that they feel closer than ever to finally achieving their goal of nonproliferation, or at least winning an international commitment to that goal. Hopes are high that U.S. President Barack Obama will visit Hiroshima before his term ends. If realized, it would mark the first ever visit by an American president in office. And they fear that allying with Fukushima too much may derail that effort.

Another reason: Hiroshima was strategically used to promote nuclear power. It was seen as the perfect place to highlight the technology's peaceful uses. At the Hiroshima Peace Memorial Museum, it is bombs and not reactors that are the enemy. A digital clock ticks away the days since the nuclear attack. Another clock shows the days from the last nuclear test. People line up to pray before a nearby memorial. The sad skeletal remains of a dome have become an international symbol, a prayer for peace.

"Look at these pictures," said Kenji Shiga, chief of the museum, pointing to a photo of a corpse so blackened and deformed one must squint to make out a head. "And this is one of the less gruesome ones. Here, it all came with a bang," Shiga said, stressing the differences between Hiroshima and Fukushima. "This is not a place merely dripping radiation."

Sunao Tsuboi, 88, is a bomb victim, who survived miraculously. A part of his ear is gone, and his face is blotched with burn marks. When he emerged from unconsciousness 40 days after the bombing, the war was long over. He was so weak and scarred he had to start by practicing crawling on the floor. He pities Fukushima, but, like the others, stresses the differences. The people of Hiroshima are "hibakusha," which means "radiation victims," while the people of Fukushima are "hisaisha," which means "disaster victims," said Tsuboi. "They wanted to kill us — no mistake about that," he said. "Maybe there will be problems in Fukushima because of the radiation, and we don't know yet if some people may end up dying. But here it was about annihilation."

Shuntaro Hida, 96, was among the doctors who treated the people of Hiroshima within days of the bombing. He has been outspoken about the dangers of what scientists call internal radiation, the ingestion of radioactive material from the air, water and food. Hida said he witnessed the deaths of hundreds of people who entered Hiroshima after the bombing, victims of radiation exposure that led to diseases including cancer, strokes, organ failure and leukemia. "No one wanted the world to know that the bomb could continue to kill for so many years later," he said.

In Hida's view, that is at least one area in which the nuclear cataclysms are intertwined. He said Hiroshima never fully faced up to the effects of internal radiation, and that same mistake is being repeated in Fukushima.