A former U.S. nuclear regulatory chief, Gregory Jaczko, said Tuesday that leaks of contaminated water at the crippled Fukushima plant had been known since early in the crisis and have worsened because Japan acted too slowly. Jaczko said he was surprised how long it took Japan to start tackling the problem. 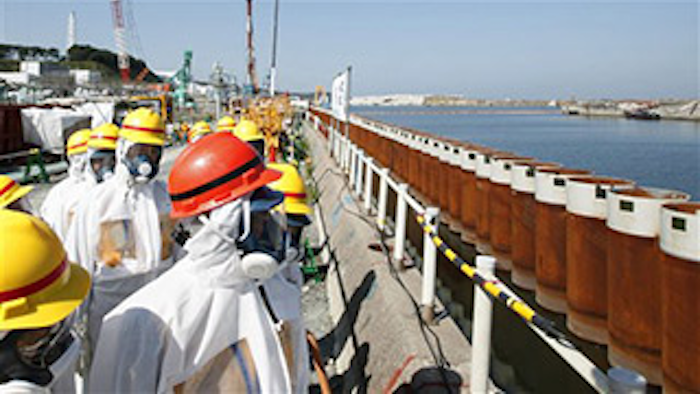 A former U.S. nuclear regulatory chief said Tuesday that leaks of contaminated water at the crippled Fukushima plant had been known since early in the crisis and have worsened because Japan

acted too slowly. Gregory Jaczko said that U.S. and Japanese officials knew leaks would occur when massive amounts of water were used to cool molten reactors at the Fukushima Dai-ichi plant after a major earthquake and tsunami hit in March 2011. Jaczko said he was surprised how long it took Japan to start tackling the problem.

"It's been known for a long time that this would be an issue," he told a news conference in Tokyo. "My biggest surprise is to some extent how it's been allowed to deteriorate, a little bit, and how it's almost become a surprise again that there are contamination problems, that there is leakage out into the sea."

When the plant was in critical condition with three reactor cores melted and in dire need of cooling water, Jaczko said, Japanese and U.S. officials disputed how much water should be put in because of the imminent leaks of radiation contaminated water and measures needed to contain that problem. He said the Japanese government was concerned that the flooding those reactor vessels and reactor buildings with cooling water "would lead to greater leakage of ground water," whereas the NRC emphasized the need to keep reactors cool and under control to minimize airborne contamination. But the "focus was lost" on the need to keep addressing the radioactive water problem, apparently delaying action on mitigating the problem, said Jaczko, who was in Japan at the invitation of an anti-nuclear citizen's group. He resigned as chairman of the U.S. Nuclear Regulatory Commission last year.

Japanese officials confirmed for first time in July that contaminated ground water has been leaking into the Pacific from soon after the accident. Leaders of the opposition Democratic Party of Japan, which was in power during the crisis, acknowledged last week that a plan to build an underground wall to surround the reactor and turbine buildings to block contaminated water leaks from the area was put off after plant operator Tokyo Electric Power Co. resisted the plan, citing financial reasons. Only the construction of the steel seawall to prevent the leaks into the sea has since begun, set for completion next year.

Democratic lawmaker Sumio Mabuchi, who was special assistant to the prime minister during the crisis, told a party meeting last Wednesday that in June 2011 TEPCO promised to build an underground wall but asked that a public announcement not be made to avoid "public confusion" over the huge additional cost burden on the struggling utility. A TEPCO internal memo, dated June 13, 2011, and obtained Tuesday by the Associated Press, acknowledges the need to build an underground boundary, possibly made of clay-soil slurry mix, around the No. 1-4 reactor and turbine basements to stop contaminants from leaking into groundwater and eventually flowing into the sea. The plan was submitted to the government after the first massive leak of highly toxic water from the No. 2 reactor basement in April 2011 "in order not to further contaminate the sea," the memo said, promising to start construction of the wall as soon as it obtained government permission. The memo noted that the cost of the wall could go as high as 100 billion yen ($1 billion), saying the company was concerned about unclear government funding prospects. TEPCO was nationalized in July 2012. In a statement earlier this month, TEPCO cited technical complexity in designing the wall, as well as high radiation levels near the reactor area as reasons for not building the wall.

Public criticism of TEPCO and the government for their handling of the crisis remains high, especially after the recent string of underground water leaks into the ocean and from storage tanks holding contaminated water used to cool the reactors. The government is funding the development of more advanced water treatment equipment to make the contaminated water clean enough to be released into the sea and paying for a costly ice wall to surround the reactor and turbine buildings to prevent further contamination of outside groundwater.

"Project Mootopia" will tackle climate change through seaweed supplements and manure management.
May 11th, 2022
Follow Us
Most Recent