With President Trump pulling the U.S. out of the Paris climate accord, China and California signed an agreement to work together on reducing emissions. 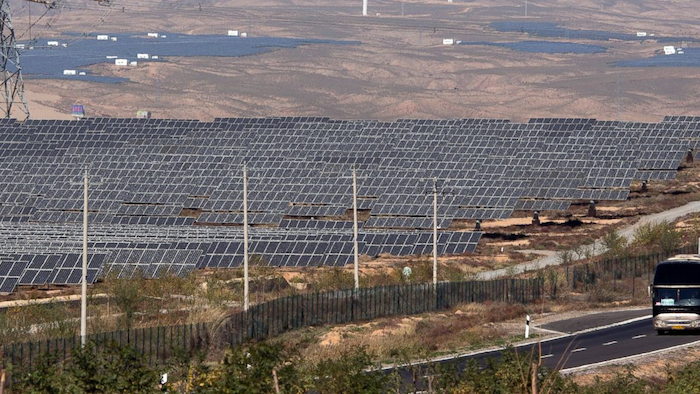 In this file photo taken Saturday, Oct. 10, 2015, a bus moves past by solar power and wind power farms in northwestern China's Ningxia Hui autonomous region. By backing off the U.S. commitment to address climate change, President Donald Trump leaves an opening for a chief economic rival, China, to expand its increasing dominance in the renewable energy industry. In reacting to Trump's announcement that he was withdrawing the U.S. from the Paris climate accord, China reaffirmed its commitment to the landmark agreement and is poised to spend heavily in coming years on renewables. (AP Photo/Ng Han Guan, File)

With President Donald Trump pulling the U.S. out of the Paris climate accord, China and California signed an agreement Tuesday to work together on reducing emissions, as the state's governor warned that "disaster still looms" without urgent action.

Gov. Jerry Brown told The Associated Press at an international clean energy conference in Beijing that Trump's decision to pull the U.S. out of the Paris agreement will ultimately prove only a temporary setback.

For now, he said, China, European countries and individual U.S. states will fill the gap left by the federal government's move to abdicate leadership on the issue.

"Nobody can stay on the sidelines. We can't afford any dropouts in the tremendous human challenge to make the transition to a sustainable future," Brown said. "Disaster still looms and we've got to make the turn."

Brown later held a closed-door meeting with Chinese President Xi Jinping, during which the two pledged to expand trade between California and China with an emphasis on so-called green technologies that could help address climate change, Brown said. Trump's announcement last week that he wants to pull out of the Paris accord did not come up, according to the governor.

"Xi spoke in very positive terms," Brown told reporters after the meeting. "I don't think there's any desire to get into verbal battles with President Trump."

Trump's decision drew heavy criticism within the U.S. and internationally, including in China, which swiftly recommitted itself to the agreement forged with the administration of former U.S. President Barack Obama. Trump argued that the Paris agreement favors emerging economies such as China's and India's at the expense of U.S. workers.

Tuesday's agreement between California and China's Ministry of Science and Technology effectively sidestepped Trump's move, bringing about alignment on an issue of rising global importance between the world's second-largest economy — China — and California, whose economy is the largest of any U.S. state and the sixth largest in the world.

Brown signed similar collaboration agreements over the past several days with leaders in two Chinese provinces, Jiangsu and Sichuan.

Like the Paris accord, the deals are all nonbinding. They call for investments in low-carbon energy sources, cooperation on climate research and the commercialization of cleaner technologies. The agreements do not establish new emission reduction goals.

The U.S. has long been a major player in the clean energy arena, driving innovations in electric cars, renewable power and other sectors of the industry. California, with some of the strictest climate controls in the nation, has been at the forefront of the sector.

China in recent years overtook the U.S. as the world leader in renewable power development. But it has also struggled to integrate its sprawling wind and solar facilities into an electricity grid still dominated by coal-fueled power plants.

At the same time, Chinese leaders face growing public pressure at home to reduce the health-damaging smog that blankets many urban areas.

In this file photo taken Saturday, Oct. 10, 2015, a bus moves past by solar power and wind power farms in northwestern China's Ningxia Hui autonomous region. By backing off the U.S. commitment to address climate change, President Donald Trump leaves an opening for a chief economic rival, China, to expand its increasing dominance in the renewable energy industry. In reacting to Trump's announcement that he was withdrawing the U.S. from the Paris climate accord, China reaffirmed its commitment to the landmark agreement and is poised to spend heavily in coming years on renewables. (AP Photo/Ng Han Guan, File)

China is by far the world's largest user of coal, which accounts for almost two-thirds of its energy use and has made it the No. 1 emitter of climate-changing greenhouse gases.

Communist Party leaders pledged that greenhouse gas emissions will peak no later than 2030 under the Paris pact, and start to fall after then. They have canceled the planned construction of more than 100 new coal-fired power plants and plan to invest at least $360 billion in green-energy projects by the end of the decade. The nation's consumption of coal fell in 2016 for a third consecutive year, but rebounded slightly in 2017.

It could meet its 2030 target a decade early.

Trump Energy Secretary Rick Perry also is attending this week's energy meeting in Beijing. Observers say delegates from other countries will be listening closely to the former Texas governor to gauge how Trump administration policies will shape global energy trends.

During a Tuesday forum devoted to capturing carbon dioxide emitted from coal plants and other large industrial sources, Perry said his agency was pursuing an "all of the above" strategy that includes research intended to spur innovation for coal, nuclear, renewables and other fuels. He left the event without taking questions.

Perry is from a state that is known for its oil production but that has also had significant renewables development. Texas has some of the largest wind farms in the country and a fast-expanding solar sector.

Such U.S. advances in renewables won't simply disappear under Trump, said David Sandalow, a former undersecretary of energy in the Obama administration now at Columbia University's Center on Global Energy Policy. Too many companies and states are heavily invested in the sector for that to happen, he said.

But a lack of government support for clean energy will cost the U.S. jobs, Sandalow added, with cuts to research programs that Trump has proposed being a sign of what's to come.

"It's backward looking and it's going to hurt the U.S.," he said. "The contrast with what's happening in China could not be more stark."

Interviewed Tuesday morning on American cable channel MSNBC, U.S. Environmental Protection Agency Administrator Scott Pruitt touted U.S. emissions reductions over past years and said that despite withdrawing from the Paris accord, the Trump administration would continue to engage others, particularly developing nations, on the effort.

"We have a strong, strong approach to reducing emissions. We have nothing to be apologetic about," Pruitt said. "America is not going to be disengaged, we are going to maintain engagement."

Trump is a strong advocate of boosting U.S. fossil fuel industries, in particular coal mining. Cheap natural gas and tighter pollution restrictions toppled coal from its dominant position in the U.S. power sector during Obama's tenure. Experts say it's unlikely to regain that position anytime soon, regardless of what Trump does.

Without mentioning Trump by name, Brown told attendees at a forum on electric vehicles that "there are still people in powerful places who are resisting reality."

Later, when asked by the AP what could prompt the U.S. to return to the forefront of climate change efforts, Brown replied, "Science, facts, the world, the marketplace."