Construction on the roughly 270-mile leg could begin early next year. 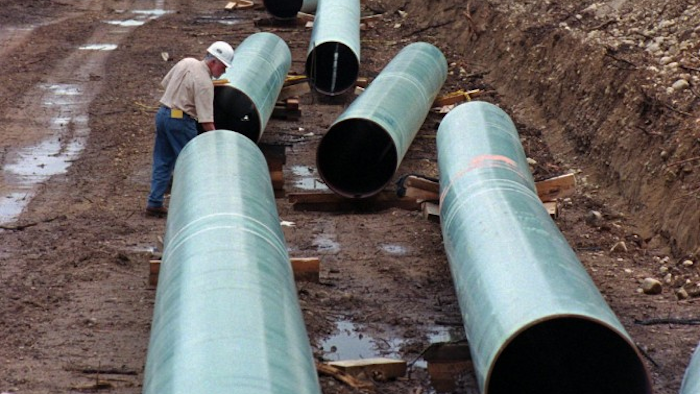 South Dakota regulators approved a construction permit Monday for a pipeline that will cross through the state as it carries North Dakota oil to Illinois.

The South Dakota Public Utilities Commission voted 2-1 to approve the permit for the Dakota Access Pipeline, and construction on the roughly 270-mile leg could begin early next year.

The 1,130-mile pipeline, proposed by Dallas-based Energy Transfer Partners, would move at least 450,000 barrels of crude daily from the Bakken oil patch in western North Dakota through South Dakota and Iowa to an existing pipeline in Patoka, Illinois, where shippers can access Midwest and Gulf Coast markets.

While hailed as a safe and cost-effective way to transport crude oil, opponents worry the pipeline could lead to environmental contamination.

The $3.8 billion project needs approval in all four states, but South Dakota is the first, the company said.

"This is an important infrastructure project that will provide a more direct, cost-effective, safer and environmentally responsible manner to transport this crude oil," spokeswoman Vicki Granado said in a statement. "We look forward to being a part of South Dakota's business and civic communities."

Public Utilities Commission Chairman Chris Nelson said the firm demonstrated that it has the legal right to have the permit issued.

Commissioner Gary Hanson, who voted against the permit, said he's concerned the pipeline is routed too close to fast-growing areas in the southeastern corner of South Dakota.

Hanson said he ultimately doesn't want to keep the project from being built, but said he just wants it "done right."

"The relative cost of rerouting this pipeline farther away from this growth area is pennies to the dollar for a multibillion-dollar pipeline," Hanson said.

Supporters of the project cite a need for energy security, point to the jobs it would create and maintain that transporting oil by pipeline is safer than moving it by rail or truck.

Opponents worry the pipeline could contaminate water supplies, farmland and archaeological sites, and harm habitat for wildlife, including endangered species.

Tony Helland, a member of conservation and family agriculture group Dakota Rural Action, said in a statement that the regulatory atmosphere in South Dakota favors incoming corporations and projects over the rights of state landowners.

The group said its unclear if there will be an appeal of the commission's decision.

The panel granted the permit with conditions. In addition to complying with state and local laws, Dakota Access — a company formed for the project — will give the commission quarterly reports, hire a liaison officer approved by the commission to deal with landowner disputes and log landowner concerns.

An independent third party, which must be approved by the commission, is also required to monitor compliance with the permit.