Three decades ago, a University of Nevada researcher who obtained one of the first U.S. Energy Department grants to study the potential to turn plants into biofuels became convinced that a roadside weed — curly top gumweed — was growing along the road to the future. 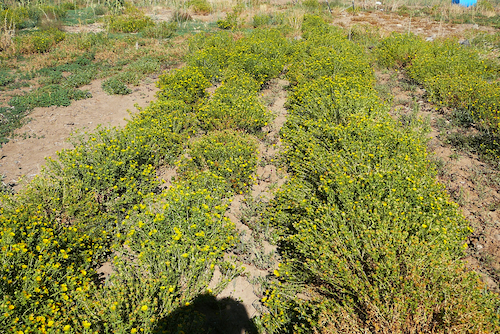 RENO, Nev. (AP) — Three decades ago, a University of Nevada researcher who obtained one of the first U.S. Energy Department grants to study the potential to turn plants into biofuels became convinced that a roadside weed — curly top gumweed — was growing along the road to the future.

Now, scientists who've been cultivating gumweed on the Reno campus think they are on the verge of producing diesel fuel, and perhaps someday jet fuel, from the sticky cousin of the sunflower that grows across much of Nevada's high desert and doesn't compete for acreage with animal feed or food crops used to make ethanol.

Glenn Miller, an environmental sciences professor in UNR's College of Agriculture, Biotechnology and Natural Resources, is leading the project in the second year of a four-year, $500,000 grant from the U.S. Department of Agriculture.

Miller didn't know much about gumweed when Darrell Lemaire, a mining engineer, secured the DOE grant in 1980 and approached him about doing some research in his lab.

Lemaire was an interesting guy.

The two scientists began growing gumweed on campus about 10 years ago and their project evolved from the premise that biofuels shouldn't be competing with food crops in Nebraska and Kansas.

"You could grow it in places like Nevada where you are not growing soybeans or corn," Miller said.

Lemaire, 89, published his findings in a 1982 book, Cultivation of Hydrocarbon Producing Plants Native to the Western U.S., and the Whole Plant Utilization of the Oils and Byproducts.

"This was after the Carter years when Jimmy Carter wore sweaters whenever he addressed the nation from the White House to indicate to everybody we were running out of energy," Miller said.

Miller said UNR researchers have successfully produced fuel by extracting hydrocarbons from the weed's oil and are in the process of getting it tested as a diesel fuel. Now it's a question of refining the process to determine if farmers can make money on it.

In recent years, environmentalists have argued that ethanol adds to global warming by removing millions of acres of land from conservation reserve programs for use in corn production, and has led to higher food costs worldwide as more corn is used for fuel.

"As prices once again reach $80 or more per barrel, this type of technology will look increasingly attractive to an industrial world struggling to reduce its carbon emissions," Payne said.

Hongfei Lin, a collaborator in UNR's College of Engineering, is trying to find a more cost-effective way to convert biomass into fuel. Instead of adding hydrogen to biomass, he's exploring utilization of oxidation — the same process involved when substances come in contact with oxygen molecules, such as when a fresh cut apple turns brown or a copper penny turns green.

Lin estimates that if gumweed was raised on just 10 percent of the thousands of square miles in Nevada where sagebrush currently grows, it could produce an estimated 400 million to 600 million gallons of biofuels annually.

Gumweed has been used many different ways historically. Native Americans used it for medicinal purposes and early pioneers chomped on it as a substitute for chewing gum.

"I have tried eating the stuff," Miller said. "It tastes terrible. I don't think there's any future in that."