EPA Downplays Dangers Of Mine Spill, But Concerns Linger

The Interior is conducting an independent review of the spill at the EPA's request. 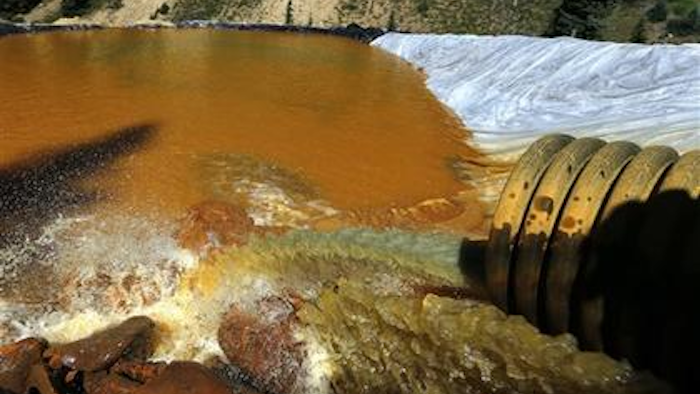 More than two weeks after a mine spill fouled waterways in several Western states, officials expressed concern Thursday over the long-term effects of contaminated river bottoms as the federal agency that triggered the accident downplayed the dangers.

U.S. Environmental Protection Agency workers released more than 3 million gallons of contaminated water Aug. 5 while investigating an inactive mine site near Silverton, Colorado. The spill prompted the shutdown of public drinking-water systems and left rivers in the region tinged a disturbing yellow-orange color that has since faded.

The EPA said in recent days that poisons including lead and thallium have been detected in river sediment samples collected from the Animas River, which travels from Colorado into northern New Mexico, joining the San Juan River before emptying into Lake Powell along the Utah-Arizona border.

In Colorado, contaminants exceeding drinking-water standards were found in seven private wells out of more than 100 tested, according to the EPA. Details on what contaminants were found and at what concentrations were not disclosed. Officials said Thursday that they would continue to investigate the wells, but noted that it was not clear if the spill was to blame.

But state health officials were more cautious as they attempted to nail down the potential for long-term damage to private drinking wells and aquatic life, from the heavy metals and other contaminants that dropped out of the passing plume.

Experts warn that sediments could be stirred up from river bottoms by storms or during the annual spring runoff, when snow at high elevations in the Rocky Mountains melts.

The sediment contains thallium, a naturally occurring metal that can cause hair loss and kidney or liver problems, as well as lead, which can delay mental development in children.

"We are concerned about this particular sediment load given how the various constituents in the sediment may continue to affect the stream," Colorado health officials said in a statement released by Jan Stapleman, spokeswoman for the state Department of Public Health and the Environment.

The officials added that there was "ongoing potential for those (private) wells to be affected as the sediment migrates into the groundwater table." It could take years to gather enough data to accurately gauge the extent of problems for fish and other aquatic life, they said.

In Utah, scientists from the state Department of Environmental Quality said tests to date suggested the water in the San Juan River presents little health risk to users. Agency officials said they were turning to a long-term monitoring strategy focusing on sediment and what, if any, steps can be taken to deal with it.

In the interim, Utah health officials warned river visitors not to drink the water and to minimize contact with dirt and sand.

In New Mexico, environmental regulators monitoring the sediment said the threat it posed was an "open question" that required long-term investigation.

After tumbling from the heights of Colorado's Rockies, the Animas slows as it enters New Mexico, allowing more sediment to drop out of the water column and onto the river bottom, said Bruce Yurdin, a water quality expert with the New Mexico Environment Department.

Contaminants can be taken up by insects living on the bottom, which are then consumed by fish and ultimately by people fishing on the popular waterway.

Yet it could be difficult to distinguish problems caused by the EPA's spill from the long history of contamination flowing from upstream mines, Yurdin said.

Thirty-eight private water wells have been sampled in New Mexico, according to the EPA. Results of those tests were not provided.

Arizona wildlife officials planned to test the tissue of fish from Lake Powell for potential contaminants.

Despite repeated requests from The Associated Press, the EPA has not released further information on the pre-spill contamination levels in the Animas and San Juan rivers, which would shed light on how much things have changed.

Navajo President Russell Begaye visited Silverton over the weekend and poured water over sediment settling on the banks of the river. He watched as yellowish sediment flowed over the rocks and downstream.

"These are things I'm concerned about, is what happens when the rain comes," Begaye said in a video posted on his office's Facebook page.

Tribal spokesman Mihio Manus said the president was considering lifting an advisory Saturday against using the San Juan River for irrigation. The EPA planned to end water deliveries for agriculture to the reservation on Friday.

The Interior Department, which is conducting an independent review of the spill at the EPA's request, said Thursday that it expects to deliver a final report by late October.

The probe will be overseen by Interior's Bureau of Reclamation.