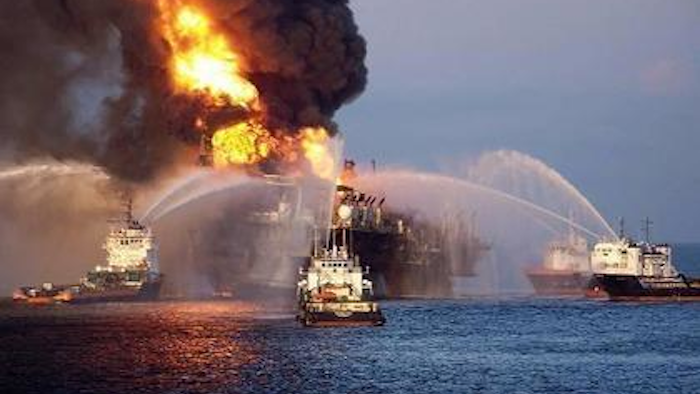 Clusters of landlocked municipalities more than 100 miles from the Gulf Coast have secured millions of dollars in BP money through settlements designed to compensate local governments for lost tourism dollars and other economic damage from the company's 2010 oil spill, according to records obtained by The Associated Press.

Nearly $8 million of that money went to 32 government entities that are more than 100 miles from the coast, in places like the Mississippi Delta and suburbs of central Alabama, the records show.

BP's well blowout off Louisiana's coast triggered a deadly explosion that killed 11 rig workers and spewed millions of gallons of oil into the Gulf of Mexico, staining beaches, killing wildlife and scaring away tourists.

The company agreed last month to pay up to $1 billion to resolve economic claims by local governments, but the settlement payouts have fallen well short of that maximum amount. The records obtained by the AP provide the most comprehensive accounting of where the money went and what types of government entities received shares.

The AP analyzed minimum distances from the center point of each city or town to the coastline to determine which locations were farther than 100 miles away from the coast.

Among the smaller cities receiving money is Ruleville, a Mississippi Delta city that landed $40,748. Ruleville, which is nearly 300 miles from the coast and has about 3,000 residents, said it lost revenue from sales taxes and other sources due to a drop in tourist travel after the spill. The city, perhaps best known as the hometown of civil rights activist Fannie Lou Hamer, is in an area that is a popular destination for blues music fans.

Irondale Mayor Tommy Joe Alexander — whose city in the Birmingham suburbs received a $57,225 settlement award — said a seafood shortage after BP's spill led to a decrease in sales tax generated by local restaurants.

"We're very fortunate that we did get something," he said. "There was an impact on the whole state."

BP's settlements with local governments are part of its broader $18.7 billion agreement with the five Gulf Coast states and the federal government. Larger portions of settlement money are dedicated to coastal restoration work. BP already has paid billions of dollars in compensation to Gulf Coast businesses and residents who claim the spill cost them money.

July 15 was the deadline for local governments to decide whether to accept the settlement offer, which could not be renegotiated. BP, which couldn't veto individual payments, accepted the package of settlements on July 27.

A modest "windfall" for several communities far from the coast must have been an afterthought for BP given the broader deal's high stakes, according to Ed Sherman, a Tulane University Law School professor emeritus and expert in complex litigation.

"It's not a great deal of money when you consider the total amount of the settlement," Sherman said.

Only a handful of local governments have publicly announced that they rejected a settlement offer. They are free to continue pursuing their claims, but may have to wait for a trial date if BP is unwilling to negotiate a separate deal.

Many local governments that sued BP over the spill enlisted help from private attorneys who handled their claims on a contingency basis, typically in exchange for at least 20 percent of the settlement amount.

Ike Gulas, an attorney who filed claims for several government entities in the Birmingham area, said officials from other local communities contacted him after the settlement was announced last month and were disappointed to learn it was too late to file their own claims.

"A lot of lawyers looked at it and didn't think there was a claim there, but we did," Gulas said.

"The timing was bad," Paden said of the spill. "The general economy was in bad shape. We can show objectively that the revenues were down for that period of time."

The federal judge overseeing most of the spill-related litigation against BP appointed a panel of neutral parties, including former FBI director Louis Freeh and Lafayette-based attorney Patrick Juneau, to determine the amounts of each settlement offer. The formulas and criteria used by the panel members have not been publicly disclosed.

The panel made offers to each local government that met certain legal requirements. To qualify, each government entity had to formally present its Oil Pollution Act claim to BP and either file a lawsuit or submit a two-page claim form directly to the federal court in New Orleans.

The $687.4 million in payments doesn't include awards to local governments that resolved their BP claims before the broader settlement was announced on July 2.

The bulk of the settlement money — which was paid by BP in lump sums and can be spent on anything — is going to city and county or parish governments along the coast. Nearly $157 million, almost one quarter of the total, is going to more than 50 public school districts. Law-enforcement agencies are receiving around $21 million. Airports are getting nearly $15 million. About $6 million is going to hospitals.

"It was a terrible time for it to happen. It was right after the recession," he said. "The budgets were cut. Pay raises were flat."

Henry Kelley, a spokesman for the Okaloosa County, Florida, public schools, said the school board hadn't yet decided how to use its $2 million settlement award.

"We're not flush with cash. If spent properly, this will make a big impact," he said.