Despite Price Slump, It Still Pays Big To Be An Oil CEO

The AP report on CEO pay in the U.S. has not been kind to oil and gas bosses. 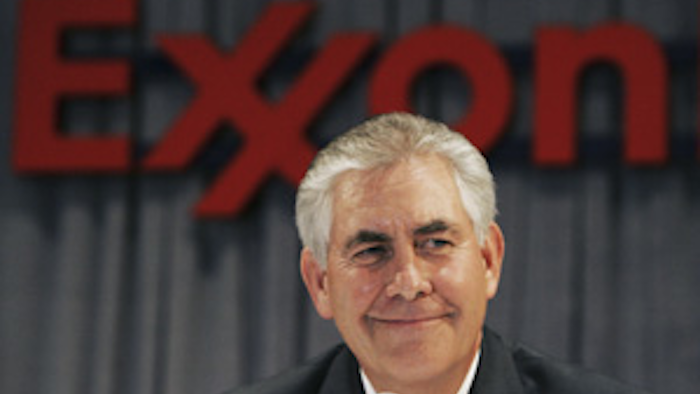 The Associated Press has released a new look at CEO pay in the U.S. and at first glance, it looks like the year hasn’t been kind to oil and gas bosses.

This year’s top seats are mostly occupied by TV big wigs. David Zazlav, head of Discovery Communications (the home of “Shark Week”) topped the list with a $156.1 million salary that increased by an eye-popping 368 percent last year.

Other media CEOs littering the top 10 list include Leslie Moonves of CBS, Philippe Dauman of Viacom and Marissa Mayer of Yahoo.

Nowhere in the top 10 is an energy CEO — in fact, there are none in the top 25. The top oil and gas CEO was ExxonMobil’s Rex Tillerson who came in at No. 29 with a $28.4 million paycheck.

But this doesn’t mean the days of big oil barons are over.

While oil, gas and chemicals CEOs may not be able to boast about having the top salaries, overall, their industry experienced the highest growth in CEO pay last year.

When looking just in terms of growth between 2013 and 2014, John Richels of Devon Energy comes in at No. 3 — his salary increased by 301 percent to $14.9 million. Patricia Woertz of Archer Daniels Midland, a major food and agriculture product company, saw an increase in her salary of 138 percent to $16.3 million.

According to AP: “The industry with the biggest pay increase was basic materials, which includes oil, mining and chemical companies. Median pay at these companies rose by 15 percent last year.”

Of course, thousands of workers in the oil industry haven’t remained as immune to the downturn in oil prices. Since the price of a barrel plummeted by 50 percent, the layoffs have been historic.

According to a Wall Street Journal report from last month, around 100,000 oil workers have been laid off so far. Most are workers from oil fields and drilling companies, but office workers and high-skilled employees like geologists and petroleum engineers have also been hit by job cuts.

And for those still in the industry, the disparity between the top and everyone else is huge — at BP the CEO earns about 50 times the average employee.

The rise in oil CEOs is also at odds with oil company profits, which have fallen significantly in recent months for many companies. A few weeks ago, Bloomberg reported that Shell’s net income had dropped in nine of the last 12 months while BP’s had fallen in six.

“The only people not hit by the drop in oil price are the CEOs running the companies,” said Gregory Elders, a London-based analyst at Bloomberg Intelligence.