The Obama administration is making a concerted effort to cast its energy policy as an economic success that is creating jobs, securing the nation against international upheavals and shifting energy use to cleaner sources. 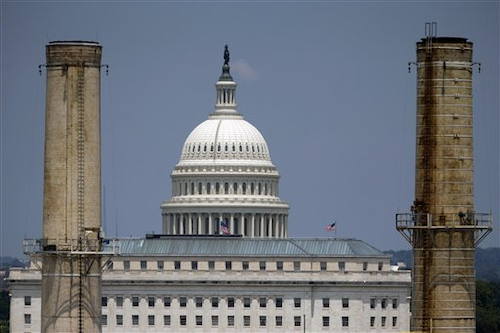 WASHINGTON (AP) -- Setting the stage for upcoming restrictions on coal-fired power plants, the Obama administration is making a concerted effort to cast its energy policy as an economic success that is creating jobs, securing the nation against international upheavals and shifting energy use to cleaner sources.

In a 42-page report released Thursday, the White House argues that significant increases in the domestic production of natural gas and reductions in oil consumption have better positioned the United States to advance its economic and environmental goals.

Few of the report's conclusions are new, but it includes a detailed analysis of how past reliance on petroleum imports made the U.S. economy especially susceptible to oil price shocks, a vulnerability that White House economists say has been diminished by a reduced U.S. demand for foreign oil.

The report, obtained in advance by The Associated Press, is designed to inoculate the administration against criticism that new Environmental Protection Agency regulations on coal-fired power plants, expected to be unveiled Monday, will increase electricity costs, cost jobs and be a drag on economic growth. Conservatives and business groups such as the U.S. Chamber of Commerce have argued that the reductions in emissions will be too small and the consequences to the economy too large to justify new restrictions.

While the White House economic report does not address those criticisms directly, it says greater domestic energy production, the use of wind and solar power and the reduction in oil consumption "have had substantial economic and energy security benefits, and they are helping to reduce carbon emissions in the energy sector and thereby tackle the challenge posed by climate change."

A quarter of the report is devoted to analyzing the economic impact of the United States' shift from importing more energy than it produced to producing more than it imports. The White House makes the case that the U.S. economy is better protected from high oil prices now than before.

So, if an upheaval occurs in an oil-producing country and sends prices soaring, U.S. consumers would still pay the higher costs at the pump, creating adverse economic reverberations. But because the U.S. is producing more than it imports, a greater portion of that consumer spending would stay in the U.S. and contribute to the economy instead of fleeing overseas. In theory, U.S. drillers would get more money, pay more in taxes and create jobs to find more oil.

That said, the U.S. remains a top oil importer, second only to China, and is the No. 1 consumer of oil.

Yet many of the trends that buttress the administration's case are attributable to dramatic technological advances that have vastly expanded the extraction of domestic natural gas and oil. The main process, called hydraulic fracturing, has caused a furor within the environmental movement.

Natural gas is cleaner-burning than coal or oil, and the White House has embraced it as a "transitional fuel." The report concedes "extraction of natural gas raises some environmental concerns," and says the administration supports "safe and responsible development."

In addition, some of the positive trends predate Obama's presidency, which began in 2009. The report acknowledges that the decline in petroleum consumption, for example, began in 2006, though it attributes much of the initial decline to the start of the recession. Meanwhile, natural gas consumption has risen 18 percent since 2005.