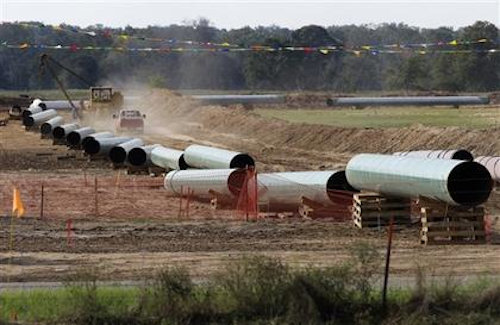 The defects — high rates of bad welds, dented pipe and damaged pipeline coating — have been fixed. But the federal Pipeline and Hazardous Materials Safety Administration wants to make sure similar problems don't occur during construction of the pipeline's controversial northern segment, which is on hold pending a decision by the Obama administration.

One condition requires TransCanada to hire a third-party contractor chosen by the pipeline safety agency to monitor the construction and make reports to the safety administration on whether the work is sound.

The second requires TransCanada to adopt a quality management program to ensure "this pipeline is — from the beginning — built to the highest standards by both Keystone personnel and its many contractors."

The conditions are buried near the end of the 26 appendices in a voluminous environmental impact statement on Keystone XL released by the State Department on Jan. 31.

Most of Appendix Z is devoted to 57 well-known "special conditions" that TransCanada agreed to three years ago. But conditions 58 and 59 are listed on an additional page.

"Everybody looked at that appendix and said, 'Oh, 57 conditions. Move on.' Well, there are a couple more there," energy analyst Kevin Book said. "They just added them without saying anything."

The new conditions were added four months after the pipeline safety agency sent TransCanada two warning letters last year about defects and other construction problems on the Keystone Gulf Coast Pipeline, which extends from Oklahoma to the Texas Gulf Coast.

Inspections by the safety agency found TransCanada wasn't using approved welding procedures to connect pipes, the letter said. The company had hired welders who weren't qualified to work on the project because TransCanada used improper procedures to test them, the letter said. In order to qualify to work on a pipeline, welders must have recent experience using approved welding procedures and pass a test of their work.

The weld failure rates are "horrible," said Robert Bea, professor emeritus of civil and environmental engineering at the University of California, Berkeley. "The level of defects is indeed cause for alarm and indicative of something that is going on in the Keystone organization that isn't satisfactory."

In high-risk projects such as nuclear submarines or nuclear power plants, even one-tenth of a percent rate of bad welds would be cause for deep concern, Bea said. He is a certified welder and was an expert consultant on the construction of the trans-Alaska pipeline in the 1970s.

"In this case, you are talking about a pipeline that has requirements on its performance that rival those of a nuclear power plant," he said.

Another letter, dated Sept. 10, said a government inspector witnessed TransCanada officials investigating dents in pipeline that had been laid without first sufficiently clearing rock from trenches or from soil used as backfill. The same letter said coating that protects pipeline from corrosion was damaged by weld splatter because a contractor hadn't followed the company's welding procedures. Eventually, pipeline was excavated in 98 places to make coating repairs.

Dents and damaged coatings are serious defects because they can weaken pipes and lead to failures, Bea said.

Davis Sheremata, a spokesman for TransCanada, cautioned against drawing a connection between construction problems found on the southern leg between Cushing, Oklahoma, and Nederland, Texas, and conditions placed on the northern leg, which will extend from Alberta, Canada, to Nebraska's southeast corner. The southern leg's problems are "a separate matter," he said in an email.

"TransCanada had identified and addressed these issues prior to any product being introduced into the pipeline and reported them voluntarily" to the government, Sheremata said. "The fact that the anomalies on the exterior of the pipe were discovered in the first place is a direct result of the 57 special safety conditions we agreed to implement on this project and Keystone XL, many of which are not required by regulation but are standard practice on all TransCanada pipeline construction projects."

But Book said the timing "would seem to suggest (the pipeline safety agency) was uncomfortable with the construction of Keystone south and that was part of their reasoning" for imposing additional conditions on the northern leg.

Damon Hill, a spokesman for the pipeline safety agency, said the additional conditions were the result of "observations in the field during construction projects from several pipeline operators over the past few years," as well as the agency's general knowledge and experience.

Keystone is intended to transport oil from Canadian tar sands to oil refineries on the Gulf Coast. Supporters say the pipeline will create thousands of jobs and aid energy independence. Environmentalists warn of possible spills and say tar sands oil is especially "dirty" and will contribute to global warming.

The project has become a major flashpoint alongside the larger debate over carbon emissions, drilling policies and tax breaks for energy companies.

The administration said in April it was putting off its decision on whether to approve the pipeline indefinitely. A decision now isn't expected until after the November elections.