Dirtiest Power Plant To Get Clean

The massive western Pennsylvania power plant is expected in a few years to turn from one of the worst polluters in the country to a model for how coal-fired power plants can slash pollution. 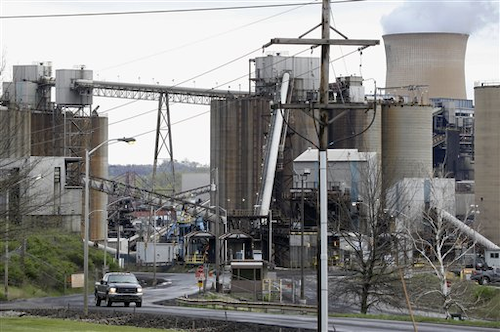 HOMER CITY, Pa. (AP) -- A massive coal-fired power plant in western Pennsylvania is turning from one of the worst polluters in the country to a model for how such a facility can clean up its act.

Homer City Generating Station is expected to make the transformation in a few years. When it does, it will end four decades of nearly limitless pollution from two of its units that had long escaped regulation.

Three years ago the plant was the first to sue the Obama administration over a rule to force it to reduce its sulfur dioxide pollution, arguing it would spike electricity prices and cause "immediate and devastating" consequences. None of those dire predictions came to pass, and the Supreme Court has upheld the Environmental Protection Agency's rule in the case initiated by the plant.

The story of the Homer City plant reflects the precarious position of older coal-fired plants these days, squeezed between cheap and plentiful natural gas and a string of environmental rules the Obama administration has targeted at coal, which supplies about 40 percent of the nation's electricity.

The latest regulation, the first proposal to curb earth-warming carbon dioxide from power plants, is due next week and will pose yet another challenge to coal-fired power plants. Dozens of coal-fueled units have already announced they would close in the face of new rules.

Homer City also shows how political and economic rhetoric sometimes doesn't match reality. Despite claims by Republicans and industry critics that the Obama administration's regulations will shut down coal-fired power plants, Homer City survived — partly because it bought itself time by tying up the regulation in courts. Even environmental groups that applaud each coal plant closing and protested Homer City's pollution now say the facility is setting a benchmark for air pollution control that other coal plants should follow, even if it takes decades.

"If there is a war on coal, that plant won," said Eric Schaeffer, the executive director of the Environmental Integrity Project and a former enforcement official at EPA.

The owners of the western Pennsylvania power plant — it releases more sulfur dioxide than any other power plant in the U.S. — have committed to installing $750 million worth of pollution control equipment by 2016 that will make deeper cuts in sulfur than the rule it once opposed.

GE Energy Financial Services, the plant's majority owner, now says it can do it — and without electricity bills increasing for the 2 million households it provides with power.

"We believe in the plant's long-term value, and that installing equipment will enable it to comply with environmental regulations," said Andy Katell, a spokesman for GE, which has been the plant's primary owner since 2001 and did not participate in the litigation.

The operator of the facility, Edison Mission Energy, couldn't raise the money to pay for the pollution controls and filed for bankruptcy before the case made it to the Supreme Court. Numerous states, environmental groups and other companies operating power plants joined the litigation keeping it alive.

Not all have fared so well. The parent company of Luminant, another challenger to the EPA rule and Texas' largest power generator, filed for bankruptcy in April after it was faced with more stringent environmental regulations and cheap natural gas prices that made it difficult to pay down its debt.

For more than 40 years, Homer City has spewed sulfur dioxide from two of its three units completely unchecked, and still does because it is largely exempt from federal air pollution laws passed years after it was built in 1969. Last year, the facility released 114,245 tons of sulfur dioxide, more than all of the power plants in neighboring New York combined.

"It is an emblem, a poster child of the challenge of interstate air pollution," said Lem Srolovic, the head of the Environmental Protection Bureau for the New York Attorney General's Office, in an interview with The Associated Press.

New York, along with New Jersey and Pennsylvania and the EPA, sued Homer City in 2011, arguing it was operating in violation of the Clean Air Act because it failed to install pollution control technology in the 1990s, when it made upgrades that increased emissions. A federal judge dismissed the case, arguing it fell outside the statute of limitations.

But U.S. District Judge Terrence McVerry said in his opinion that he appreciated the frustration "that society at large continues to bear the brunt of significant sulfur dioxide emissions from that grandfathered facility."

A class-action lawsuit filed by local citizens to get the plant to clean up its pollution also failed. And the Sierra Club appealed the plant's plans to control sulfur dioxide, securing a settlement in 2012 that requires it to show that it will not exceed sulfur dioxide limits.

"It should be the new standard for coal plant permits in the country," said Tom Schuster, who heads the Sierra Club's Beyond Coal campaign in Pennsylvania. "When coal-fired power plants are held responsible, the health and quality of life benefits far outweigh any cost."

The EPA estimates that about 30 percent of the coal-fired units in the U.S. are operating without scrubbers, pollution control equipment to control not only for sulfur dioxide, but also mercury, a toxic metal that will be controlled for the first time from power plants next year. The scrubbers are called that because they "scrub" the sulfur out of the smoke released by coal-burning boilers.

All must install them soon, or be retired, to meet new EPA rules. Homer City received a yearlong extension on the deadline from Pennsylvania's Department of Environmental Protection.

"They will be the last of the existing power plants installing scrubbers," Vince Brisini, a deputy secretary for the Pennsylvania DEP, said of Homer City. "Those that don't have scrubbers will not survive."

Of the 1,687 people who live in Homer City, where the power plant's towering smokestacks have long served as a local landmark, many are relieved that the plant's 255 jobs are staying put, for now. The plant in the future will likely have to reduce smog-forming nitrogen oxides further to comply with the rule the Supreme Court revived last month. And it will also have to comply with upcoming rules to reduce the gases blamed for global warming.

"I'm all in favor of saving the environment," said Rob Nymick, the borough manager. "But it's also important to have jobs in this area. We lose the power plant, we're in trouble."