BNSF Says Future Of Crude By Rail Depends On Safety

The head of the biggest railroad hauling North Dakota crude says the future of oil shipments depends on proving that it can be done safely. 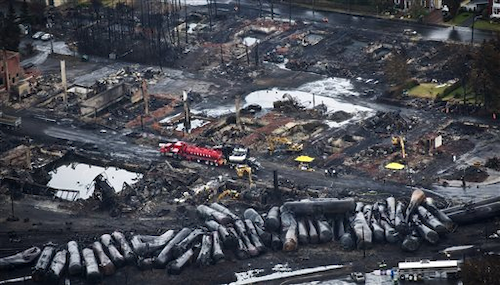 BISMARCK, N.D. (AP) -- The future of crude oil shipments by train depends on proving to the public that it can be done safely, the head of BNSF Railway Co. said Wednesday.

"Without focus on the elements of safety, the social license to haul crude by rail will disappear, to say nothing of the regulatory agencies' response," BNSF Executive Chairman Matt Rose told several hundred people at the Williston Basin Petroleum Conference in Bismarck.

BNSF is based in Fort Worth, Texas, but is part of Warren Buffett's Berkshire Hathaway Inc., based in Omaha, Nebraska. The railroad is the biggest player in the rich oil fields of Montana and North Dakota, hauling about 75 percent of the more than 1 million barrels that moves out of the region daily.

Rose told the conference that the railroad is committed to preventing accidents like its Dec. 30 crash outside Casselton that left an ominous cloud over the town and led some residents to evacuate. The disaster in the small town west of Fargo was one of at least eight major accidents during the last year, including an explosion of Bakken crude in Lac-Megantic, Quebec that killed 47 people. Other trains carrying Bakken crude have since derailed and caught fire in Alabama, New Brunswick and Virginia.

The crash occurred when a train carrying soybeans derailed in front of a BNSF oil train, causing that train to also derail and set off fiery explosions. The crash spilled about 400,000 gallons of crude oil, which took nearly three months to clean up.

Rose said the railroad has learned from the disaster and has done such things as decreased train speeds in some areas and increased inspections. The railroad also announced in February that it would voluntarily purchase a fleet a of 5,000 strengthened tank cars to improve safety for hazardous materials shipments. The company said it hoped to accelerate the transition to a new generation of safer tank cars and give manufacturers a head start in designing them as federal officials consider changes to the current standards.

Not everyone in the oil sector is eager to transition to stronger tank cars. At the expo a day earlier, Kari Cutting, vice president of the North Dakota Petroleum Council, said it was "not proven that extra steel is going to prevent those breaches."

Oil from North Dakota began being shipped by trains in 2008 when the state reached capacity for pipeline shipments. The state is now the nation's No. 2 oil producer, behind Texas.

BNSF said it plans to invest $5 billion in its railroad this year, including $900 million to expand capacity where crude oil shipments are surging. Its 2014 spending plan is about $1 billion more than last year, a record, Rose said.

Much of the upgrades will be aimed at safety, he said.

"BNSF believes, at the end of the day, that every rail accident is preventable," Rose said.