Just as ethanol producers have been seeing the industry's most profitable months ever, the federal government is considering whether to lower the amount of the corn-based fuel that must be blended into gasoline. 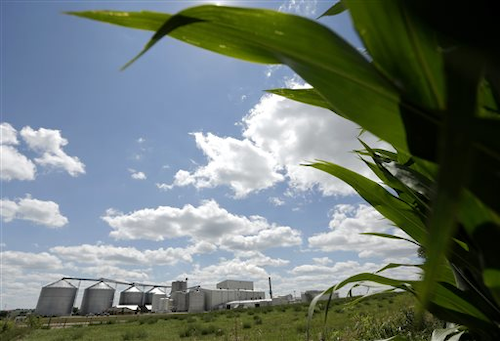 DES MOINES, Iowa (AP) -- Just as ethanol producers have been seeing the industry's most profitable months ever, the federal government is considering whether to lower the amount of the corn-based fuel that must be blended into gasoline.

That could be a serious blow to a biofuels industry that saw booms and busts connected to corn and petroleum prices before a renewable fuel standard approved by Congress in 2007 acted as a stabilizing factor.

The law, designed to reduce the nation's reliance on foreign oil and cut automobile emissions, increased the amount of ethanol required to be used each year, setting the standard at 14.4 billion gallons of corn-based ethanol for this year. In November, however, the EPA proposed the first rollback since the standard was enacted, to 13 billion gallons.

"There are several factors in play and those factors are constantly changing the demand for fuel," said Bob Perciasepe, deputy administrator of the EPA who was in Des Moines last week for a meeting of President Barack Obama's task force on climate change.

EPA officials say fewer gallons of ethanol are necessary because the fuel efficiency of cars improved more quickly than expected, helping lower fuel demand. The U.S. consumed about 134 billion gallons of gasoline last year, about 6 percent less than the record high of about 142 billion gallons consumed in 2007, according to the U.S. Energy Information Administration.

The EPA, which has received more than 343,000 comments on its proposal, plans to reach a final decision in late June.

Frustrating for the ethanol industry is that the EPA's recommendation came just as ethanol was hitting its stride in profitability.

By comparison, the average ethanol plant profit from 2007 to 2013 was 20 cents per bushel.

The model used to compute the profit was designed at Iowa State University to be representative of the average ethanol plant built in the last five years based on production capacity, construction costs, debt, fixed costs and other factors.

Ethanol plant profitability is driven largely by the cost of each bushel of corn, the amount the plant gets paid for each gallon of ethanol made, and income from a byproduct called dried distillers grain, a high-protein livestock feed.

The rapid rise in profitability occurred as ethanol prices jumped 63 percent between the end of January and the end of March while corn prices rose just 8 percent over the same period. Feeding the ethanol price jump were low supplies coming out of the winter months, rail transportation issues, and strong demand from Canada and the Philippines.

"To have a first quarter like we did, especially after the number of years we just struggled to keep our nose above water and hope for better days, feels really good," said Monte Shaw, director of the Iowa Renewable Fuels Association, a trade group. "The current EPA proposal — and obviously we hope it gets changed — is like saying thanks, but no more."

Shaw said the EPA's proposal will stifle growth in the industry, but "if they bump the number back up, I definitely see plants kicking into high gear and some idle plants still out there might come back on line, and we could see some growth."

The petroleum industry continues to fight the expansion of ethanol, arguing that many vehicles aren't certified to run on higher-ethanol blends.

Officials in corn production states are lobbying hard to convince the EPA to restore the renewable fuel standard.

"We think they've made a terrible mistake and they've relied on inaccurate and out-of-date information," Iowa Gov. Terry Branstad said in an interview. "We've done a lot — Iowa State University and others — to supply them with updated and accurate information."

Iowa leads the nation in ethanol production with 42 ethanol plants and two under construction in addition to 12 biodiesel facilities. Other top ethanol producers are Nebraska, Illinois, and Minnesota.