A major supplier to the oil and gas industry says it will begin disclosing 100 percent of the chemicals used in hydraulic fracturing fluid, with no exemptions for trade secrets. 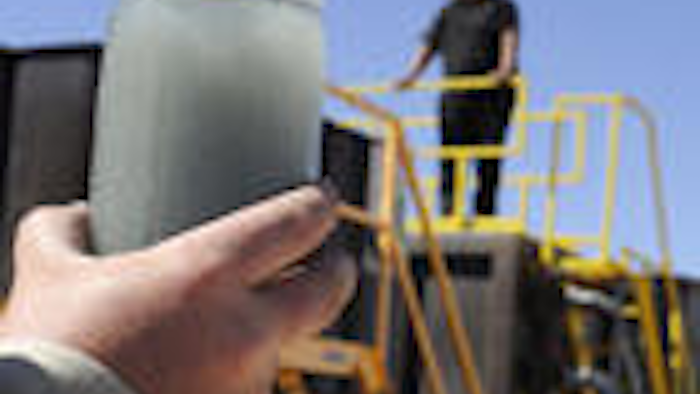 PITTSBURGH (AP) -- A major supplier to the oil and gas industry says it will begin disclosing 100 percent of the chemicals used in hydraulic fracturing fluid, with no exemptions for trade secrets. The move by Baker Hughes of Houston is a shift for a major firm; it's unclear if others will follow suit.

The oil and gas industry has said the fracking chemicals are disclosed at tens of thousands of wells, but environmental and health groups and government regulators say a loophole that allows companies to hide chemical "trade secrets" has been a major problem.

A statement on the Baker Hughes website said the company believes it's possible to disclose 100 percent "of the chemical ingredients we use in hydraulic fracturing fluids without compromising our formulations," to increase public trust.

"This really good news. It's a step in the right direction," said Dr. Bernard Goldstein, the former dean of the University of Pittsburgh Graduate School of Public Health. "One hopes that the entire industry goes along with it."

But Goldstein noted one "major hedge" in the Baker Hughes position, since the company said it will provide complete lists of the products and chemical ingredients used in frack fluids "where accepted by our customers and relevant governmental authorities."

Still, Goldstein said the Baker Hughes language sets a new standard for transparency and "clearly distinguishes them from Halliburton," another major industry supplier.

Baker Hughes spokeswoman Melanie Kania wrote in an email that it will take "several months" for the new policy to take effect. She said the end result will be a "single list" that provides "all the chemical constituents" for frack fluids, with no trade secrets.

Amy Mall, a policy analyst for the Natural Resources Defense Council, said the Baker Hughes move is a positive step, and that "if one company can do it, it's very clear all companies can do it." Mall said NRDC doesn't believe companies should use the trade secret argument to hide drilling chemicals.

A spokeswoman for Houston-based Halliburton, another major oil and gas supplier, did not immediately respond to requests for comment.

A boom in drilling has led to tens of thousands of new wells being drilled in recent years using the fracking process. A mix of water, sand and chemicals is forced into deep underground formations to break rock apart and free oil and gas. That's led to major economic benefits but also fears that the chemicals used in the process could spread to water supplies.

The mix of chemicals varies by company and region — and some of the chemicals are toxic and could cause health problems in significant doses — so the lack of full transparency has worried landowners and public health experts.

Many companies voluntarily disclose the contents of their fracking fluids through FracFocus.org, a website partially funded by the oil and gas industry that tracks fracking operations nationwide. But critics say the website has loose reporting standards and allows companies to avoid disclosure by declaring certain chemicals as trade secrets.

A U.S. Energy Department Task Force report issued in March that found that 84% of the wells registered on FracFocus invoked a trade secret exemption for at least one chemical. The Task Force said it "favors full disclosure of all known constituents added to fracturing fluid with few, if any exceptions."

The FracFocus website is managed by the Ground Water Protection Council and Interstate Oil and Gas Compact Commission, both based in Oklahoma, and is funded by industry and the Energy Department.

Gerry Baker of the Oil and Gas Compact said he doesn't know of any other major supplier that has made a pledge similar to the one from Baker Hughes.

"It's a business decision on their part," Baker said. "Somehow, they've committed to this at the highest levels" of disclosure.

The Interior Department is expected to finalize proposed regulation for hydraulic fracturing on public lands by the end of the year. The measure would apply to some 700 million acres of federal lands and 56 million acres of lands controlled by federally recognized Indian tribes.

The rule proposed last year would require companies drilling for oil and natural gas to disclose chemicals used in fracking operations. The information would be made public.

The DOE said 25 states now mandate public disclosure of the chemicals used in hydraulic fracturing, including 15 that use FracFocus as a reporting tool.

Industry groups oppose the disclosure rule, saying it would be costly for businesses, with little environmental or safety benefit. The American Petroleum Institute, the oil industry's top lobbying group, has praised the efforts of states to adopt the FracFocus database for disclosing chemicals, but has said additional federal regulations could jeopardize economic growth.

Asked about the Baker Hughes plan, API spokesman Zachary Cikanek said in an email that they "also welcome additional efforts by individual companies to increase public engagement and transparency."