Canada says it will require a three-year phase out of the type of tank cars involved in the Quebec train derailment last summer that killed 47. 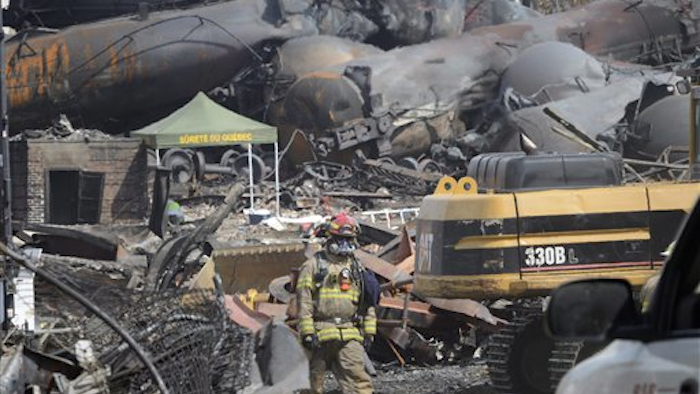 TORONTO (AP) -- Canada will require a three-year phase out or retrofit of the type of rail tankers involved in last summer's massive explosion of an oil train that destroyed much of a Quebec town and incinerated 47 people, a government official told The Associated Press Wednesday.

Last July, a runaway oil train derailed and exploded in Lac-Megantic, Quebec, near the Maine border. Forty-seven people were incinerated and 30 buildings destroyed.

A government official confirmed the phase out of the DOT-111 tanker cars used to carry oil and other flammable liquids. The official spoke on condition of anonymity because the official was not authorized to speak publicly ahead of the plan's official announcement.

Canada's Transport Minister will announce new rules later Wednesday in response to recommendations by Canada's Transportation Safety Board in the aftermath of the tragedy. U.S. officials will be watching closely as the rail industry is deeply integrated across North America and both nations' accident investigators implored their governments earlier this year to impose new safety rules.

The DOT-111 tank car is considered the workhorse of the North American fleet and makes up about 70 percent of all tankers on the rails. But they are prone to rupture. The U.S. NTSB has been urging replacing or retrofitting the tank cars since 1991.

Canada's safety board has said a long phase-out would not be good enough.

Safety experts have said the soda-can shaped car has a tendency to split open during derailments and other major accidents.

There's been intense political and public pressure to make oil trains safer since a runaway train with 72 tank cars of North Dakota oil derailed and exploded in Lac-Megantic. The train was left unattended by its lone crew member while parked near the town. The train came loose and sped downhill into Lac-Megantic. More than 60 tank cars derailed and caught fire, and several exploded, destroying much of the downtown.

The oil industry has been increasingly using trains to transport oil in part because of a lack of pipelines.

The oil trains, some of which are 100 cars long, pass through or near scores of cities and towns.

Some companies have said they will voluntarily take the DOT-111 tank cars offline. Irving Oil Ltd., a large Canadian refiner, has said it will stop using the older DOT-111s by April 30. Canada's two largest railways, Canadian National Railway and Canadian Pacific Railway, have already said they would move away from the DOT-111. But it is the oil companies or shippers that own or lease many of the cars.